The mayor won the room but can the room win West Vancouver? That was the question Wednesday night after Mayor Michael Smith beseeched the sold-out West Vancouver Yacht Club crowd to reinvigorate the community with new development and political advoca
Mar 10, 2017 3:59 PM By: Jeremy Shepherd 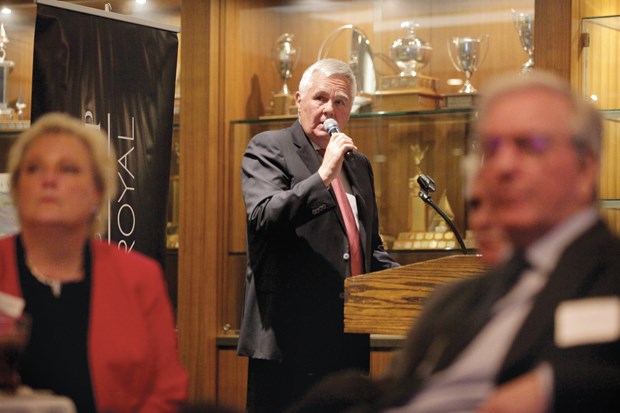 The mayor won the room but can the room win West Vancouver?

That was the question Wednesday night after Mayor Michael Smith beseeched the sold-out West Vancouver Yacht Club crowd to reinvigorate the community with new development and political advocacy.

“I’ve lost a lot of friends in the last few years,” Smith said. “They move out.”

To underline the political inertia he sees as problematic, Smith quoted a district report prescribing more diverse and affordable housing options for seniors and young families.

“This is a 1991 council report,” he told the audience, which included representatives from developers including Cressey, Milliken and Larco.
“We have twice as many bedrooms in West Vancouver as we had in the 1970s and half the number of kids,” he said. “We need young families and we need a place for them to live.”

That housing shortage may make it a challenge to hire the best teachers, noted school board chairwoman Carolyn Broady, who spoke during the evening’s question-and-answer portion.

About 16 per cent of West Vancouver teachers live in the municipality, while 63 per cent live on the North Shore, according to findings from the West Vancouver school district.

“I would submit that every application has significant benefit,” Smith said.

A frustrated Smith suggested council was shirking their obligation to deal with development proposals in a timely fashion.

“This should be the No. 1 place that people want to put money into,” the mayor said. “We’ve got to step up our game as a community. In this room are the community leaders who can do that.”

Smith struck a collegial tone when an audience member requested council members in attendance state their reasons for voting to slow development.

“This is my night and I don’t see the purpose of putting them on the spot,” he said. “They all have valid reasons.”

As the lone council member to oppose the moratorium, Smith argued a previous “exhaustive” OCP review failed to revitalize Ambleside.

“The only legal place to take (a friend) for a glass of wine in Ambleside is the Squarerigger Pub. . .” he said. “At some point you’ve got to stop hiring consultants and writing reports.”

The only project to bring excitement to West Vancouver’s seaside neighbourhood is the Grosvenor development – which required an OCP amendment, Smith noted.

While the police building generated about $60,000 in annual tax revenue, Smith predicted Grosvenor will generate approximately $1 million each year.

The stars of West Vancouver’s inaction movie are a small, vocal group who “were fortunate” to buy houses in the district 40 years ago, said Smith.

“That group is going to oppose virtually anything that we propose,” he said.

Smith also called attention to the upcoming provincial election, asking: “Who’s looking out for us?”

Smith cited the $350,000 the district pays to RCMP’s Integrated Homicide Investigation Team, noting he convinced fellow mayors to establish a payment model that would save West Vancouver $150,000 by placing more weight on crime statistics.

That submission made it to Victoria, “never to be heard from again,” according to Smith.

The provincial government also took a drubbing for dragging their feet on funding the new Lion’s Gate Wastewater Treatment plant.

“What are we going to do, go back to septic tanks?”

Smith was noncommittal about running for mayor again in 2018, but promised to be politically active.

“If people want to know my advice then I think I’m going to share that with them.”

This article has been amended to clarify West Vancouver council's decision to defer new development proposals. Council's decision applies to projects that are out of step with neighbourhood character or inconsistent with site-specific policy around height and density. The figure concerning how many West Vancouver teachers live in the municipality has also been amended.