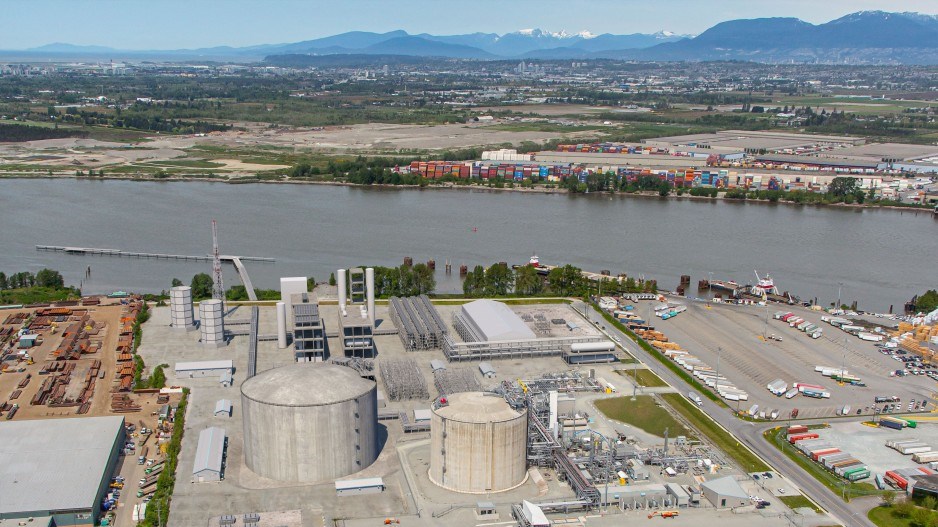 The provincial government is now welcoming public comments until July 16 on a major expansion for the Tilbury LNG plant in Delta.

As proposed, the “Tilbury Phase 2 LNG Expansion Project” would increase the facility's liquefied natural gas (LNG) production capacity by more than 50%, up to 13,700 tonnes of LNG per day for an operational life of at least 40 years. The expansion also includes one additional storage tank, according to the BC Environmental Assessment Office (EAO) and the Impact Assessment Agency of Canada (IAAC).

The facility is in Delta, along the Fraser River. Environmental concerns have been raised by local residents, citing the project as part of a cumulative industrialization of the river, when factoring in nearby expansion plans at Fraser Surrey Docks and an under-construction jet fuel storage and unloading facility across the river from Tilbury in Richmond. As well, a new eight-lane tunnel is planned a few kilometres downstream on Deas Island.

The project is also needed to reduce emissions from domestic industry, FortisBC asserts:  “Marine operators including BC Ferries and Seaspan Ferries currently operate LNG fueled vessels and are planning to expand their fleets. FortisBC is also providing LNG and compressed natural gas as fuel for on road transportation customers including trucking fleets, waste haulers, and bus fleets helping them transition to a lower emission fuel.”

FortisBC also has a deal with Top Speed Energy Corp. to export 53,000 tonnes from the expanded facility to China.

The B.C. government has asked the federal Minister of Environment and Climate Change (at the request of FortisBC) that it conduct the entire review of the Tilbury expansion, instead of having it also go through the federal impact assessment process. The federal ministry, which oversees IAAC, has not made a decision on this yet, according to a joint statement. Rather, it is seeking comments from the public and Indigenous groups on this request.

Additionally, WesPac is proposing to construct a marine jetty next to the facility to supply LNG to ships for export. “WesPac’s project is separate and distinct from the proposed Project,” according to a FortisBC proposal document. “The WesPac project is currently undergoing a combined Federal and Provincial EA, under a substituted Provincial process that is led by the BC EAO that includes assessments for shipping and loading activities that considers the Phase 1 and Project LNG production and distribution capacities.”

Regarding federal and Indigenous considerations, FortisBC states, “There are no Federal lands or reserves that will be used for the purpose of carrying out the Project.”

And, “The Project will not require Federal financial support and is located in an area that has not been the subject of Federal regional environmental studies.”

One possible wrinkle, however, is an ongoing land claim by the Cowichan Tribes.

The Cowichan Nation Alliance is presently in court seeking aboriginal title of land in Delta and Richmond. It is suing both senior governments, the City of Richmond, the Vancouver Fraser Port Authority, the Musqueam Indian Band and the Tsawwassen First Nation. FortisBC notes in its proposal the historic village site of Tl’uqtinus is located approximately 515m north of the project site on the opposite side of the river. It also states it has previously reached an agreement with the Cowichan on another LNG project.

Comments on this project can be provided online to either the BCEAO or IAAC.

Despite most places, such as restaurants, opening with COVID-19 physical distancing measures in place, the BCEAO is choosing not to hold open houses. Instead, two virtual open houses will be held (June 18, 4-5:30 p.m., and June 23, 5:30-7 p.m.).

The virtual open houses will include presentations on the federal and provincial review processes, a presentation by proponent FortisBC Holdings Inc., and opportunities to ask questions online or by telephone (projects.eao.gov.bc.ca or dial 1-833-968-1918 and use conference ID 5057416 (June 18) or 6887462 (June 23)).