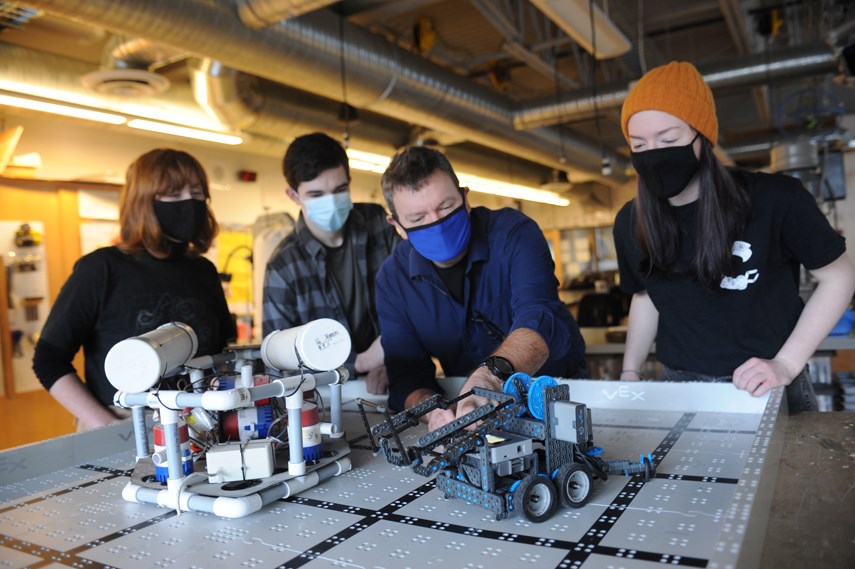 Levers are turning for a new robotics academy to go ahead this fall at North Vancouver’s Carson Graham Secondary.

The new academy has also scored some extra load capacity from North Vancouver’s Capilano University, which has pledged support for the hands-on approach.

The university’s dean of arts and science has committed faculty instructional support as well as use of state-of-the-art industry equipment that the university uses in its own engineering programs, said Michael Kee, district principal of academies for North Vancouver School District.

The university is also interested in working with the North Vancouver robotics academy on the concept of “robotics for social good,” he said.

The school district will hold a lottery for spots in the new academy after 47 students applied to take part in the program, which has space for up to 30.

The robotics academy is ratcheting up from a robotics club and engineering courses already offered at Carson Graham.

The academy will include a partnership with Zen Maker Labs, a local company that specializes in providing science, technology, engineering, arts and technology education to help students in both school and after-school programs in the Lower Mainland and will make use of the company’s lab in the City of North Vancouver's Shipyards district.

Working with the lab will allow students to tap into connections with post-secondary institutions the lab works with, including UBC, BCIT and SFU, said Kee.

Trustees noted there may be opportunities to expand the program in the future, noting students at Handsworth and Argyle have expressed interest.

The new academy will be open to students from anywhere in the North Vancouver school district in grades 10 through 12.

Startup costs for the program are estimated to be about $34,000 – most of that for specialized robotics kits. So about half of that has been committed and Zen Maker Labs is working on fundraising through sponsorship and donations.

The estimated cost for students to register in the academy is $2,145 per year.

Zen Maker Lab is also committed to raising funds for bursary assistance to help families who otherwise would find participation in the academy difficult, said Kee.