How to save a Japanese fishing village: brave men and a totem pole

Squamish Nation carver Darren Yelton has been commissioned to create a marker to honour Gihei Kuno, a carpenter who saved his fishing village in Japan by immigrating to Steveston
Aug 1, 2020 8:00 AM By: Martha Perkins 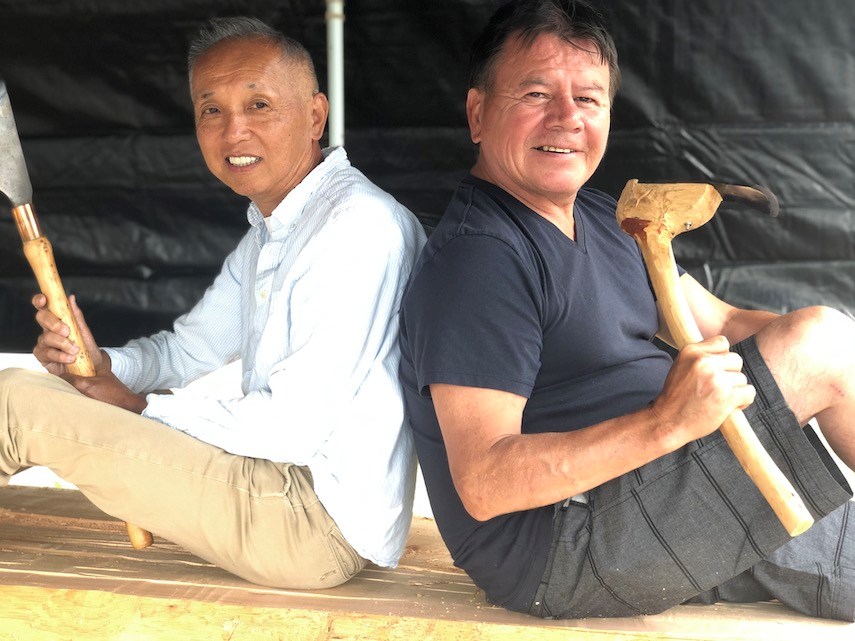 Holding carving tools, Sammy Takahashi and Darren Yelton are celebrating their initiative to honour an early Japanese immigrant to Steveston by creating a totem for his village.Martha Perkins LJI Journalist

Gihei Kuno couldn’t believe how many salmon were swimming up the Fraser River. In fact, he wrote with glee to his family back in Japan, the fish were so plentiful that they jumped right into his boat.

The year was 1888. Kuno was from Mio, an impoverished fishing village in Wakayama-ken, southeast of Osaka. The village needed to protect itself from the sea but couldn’t afford to build a breaker. Kuno, a master carpenter, braved the Pacific Ocean to find work in Vancouver, planning to send his earnings back home.

He soon made his way to Steveston, home to the largest fish cannery in the dominion. This was definitely a land of plenty. There were enough jobs for thousands more of his fellow villagers.

Kuno went back to Mio with his tales of a river dancing with fish. Nearly every man of working age decided to join him in Canada, leaving only 2,000 people in the village. Most believed the sacrifice was worth it. Money sent back to the village sustained those who were left.

That work ethic was passed on through the generations. Kuno’s great-grandson is Toshio Takai, an immensely successful businessman in Hyogo. And, thanks to a chance epiphany in the parking lot of Save-On-Foods in North Vancouver, Takai is commissioning a totem pole by a local Squamish Nation carver in honour of his ancestor’s grit and determination.

“The world is free and open to anyone. No one owns Mother Earth and if people want to go to another country and prosper and thrive in freedom, that’s the way the world should be,” says Darren Yelton. He will spend the next two months transforming the old-growth cedar log that’s lying prone in his driveway into a three-metre high marker that will stand tall on the shores of Mio, thousands of kilometres away on the other side of the Pacific Ocean.

Yelton’s ancestral name is Kanakweltn. It means “He who works to save the future of his family.” That’s what Yelton does through the carving of his totem poles, which can be found throughout the Lower Mainland. And it’s what he admires Gihei Kuno for doing more than 130 years ago.

For Yelton, “this honour pole will bring us together as one people.”

It will have four components. At the top will be a bald eagle to represent power and prestige. The eagle will be holding a Kayatchn.

“The Welcome Man reaches out and welcomes you to his sacred territory,” Yelton says. “He signifies peace and friendship to all he meets.”

Then there will be a bear, which signifies strength.

“Any time we witness a bear, it’s there for one reason — to bring strength to our people.” And in the bear’s paws will be a chinook salmon, embodying the cycle of life.

Sammy Takahashi was shopping at Marine Drive's Save-On-Foods when he noticed a pole that Jim Pattison had asked Yelton to create. Takahashi is the president of the Japan-Canada Chamber of Commerce and lives on the North Shore. He’d recently hosted a delegation from Mio, which is part of Wakayama, the sister city of Richmond, B.C.

“They told me their village was dying,” Takahashi said. He wanted to help them. But how?

Knowing how important tourism is to the Lower Mainland, Takahashi thought a totem pole would help rejuvenate Mio and symbolize the friendship with Canada. When he saw the grocery store totem, it all came together. He went into the store and asked the woman at the customer service desk if she knew the carver. She was friends with Yelton and knew his number. Two hours later, Takahashi was at Yelton’s home in Xwemlch’stn in the shadow of the Lions Gate Bridge.

“Totem poles are very magnificent and majestic. They’re also very spiritual,” Takahashi says of why it’s such a meaningful gift in Kuno’s honour.

Report #2 from my visit in Japan I met Toshio Takai who’s a great grand son of the pioneer immigrant, Gihei Kuno who...

Posted by Japan-Canada Chamber of Commerce on Tuesday, October 22, 2019

One final piece was missing: how would they pay for the pole’s creation and shipment to Mio? That’s when Takahashi’s research led him to Toshio Takai. During a goodwill visit to Japan in October 2019, Takahashi met with Takai and told him of his cross-cultural idea. Takai said “Get it done and I’ll pay for it.”

Takai is also paying for Yelton and Takahashi to accompany the finished pole to its new home in Mio.

The pandemic slowed down the planning phase but now Yelton is ready to get to work. It’s a fitting project for these times.

“I pray they find a vaccine soon,” Yelton says. “We all need to live together as one and travel this world together. ... By battling this pandemic as one, we will defeat it.”