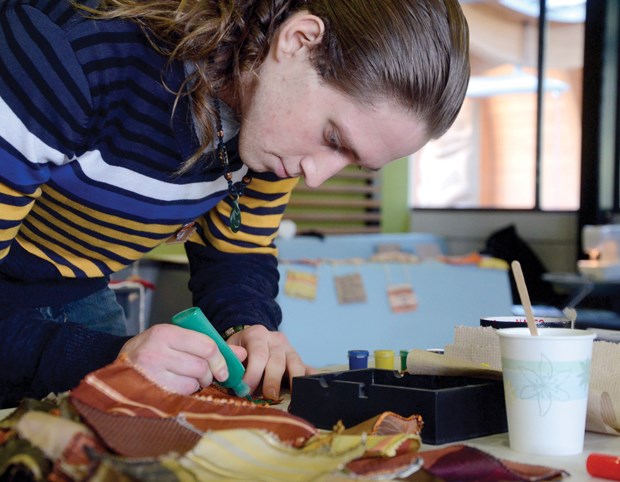 Marc Desauliniers works on a square of fabric to be sewn into a quilt the Capilano Students' Union's Social Justice Committee is assembling during its 5 Days for the Homeless campaign.Mike Wakefield, North Shore News

Outreach workers and volunteers found two of the North Shore's homeless - an elderly couple - sleeping in their car at a gas station. They looked for others camped out in the bush behind shopping malls, hanging out at the bottle depot - and even in hospital beds.

The volunteers who fanned out across the North Shore Tuesday night and Wednesday this week were helping to conduct a homeless count done every three years in North Vancouver. The count is intended to give social service agencies some idea of how many people are homeless.

The count started on the evening of March 11 at the North Shore shelter run by the Lookout Society.

Linda Fox, manager of the shelter, estimated about 60 people were tallied at the shelter that evening.

"Our shelter is always full," she said.

Since the first homeless count was conducted 12 years ago, numbers of homeless recorded on the North Shore have risen from 44 in 2002 to 117 in the last count.

But outreach workers guess the number of homeless is actually higher - between 200 and 300.

A lot of homelessness is still hidden here, said Fox.

That can include people who are couch surfing without any permanent place to call home, half a dozen people who are all crashing in a oneroom apartment and others who simply pack up and disappear into the shadows during the day.

A lot of times, "people tend to want to be off the radar" said Fox. "It's just a survival technique for some."

Those who provide services to the homeless say the population on the North Shore is generally getting older. "We've had people in here who are upwards of 80 years old," said Fox.

There are also a growing number of families with children who are homeless.

One of the challenges on the North Shore is lack of affordable housing. Most people who are homeless here don't want to leave the North Shore, added Fox, which makes finding an affordable place to live especially challenging.

In 2012/2013, the shelter on West Second Street at Bewicke Avenue provided almost 16,000 "bed nights" to roughly 720 people. There were also almost 2,600 instances of people being turned away from the North Shore shelter, according the Lookout Society's annual report - up 22 per cent from the previous year.

This week, the social justice committee of the Capilano Students Union is also raising money to donate to the North Shore Youth Safe House, an emergency shelter for youth.

Preliminary numbers for the count are expected by the end of next month.