The woman was hiking along the Big Cedar and Kennedy Falls trail with her husband when she twisted her leg while negotiating a difficult section of the trail.
May 3, 2021 2:15 PM By: Elisia Seeber 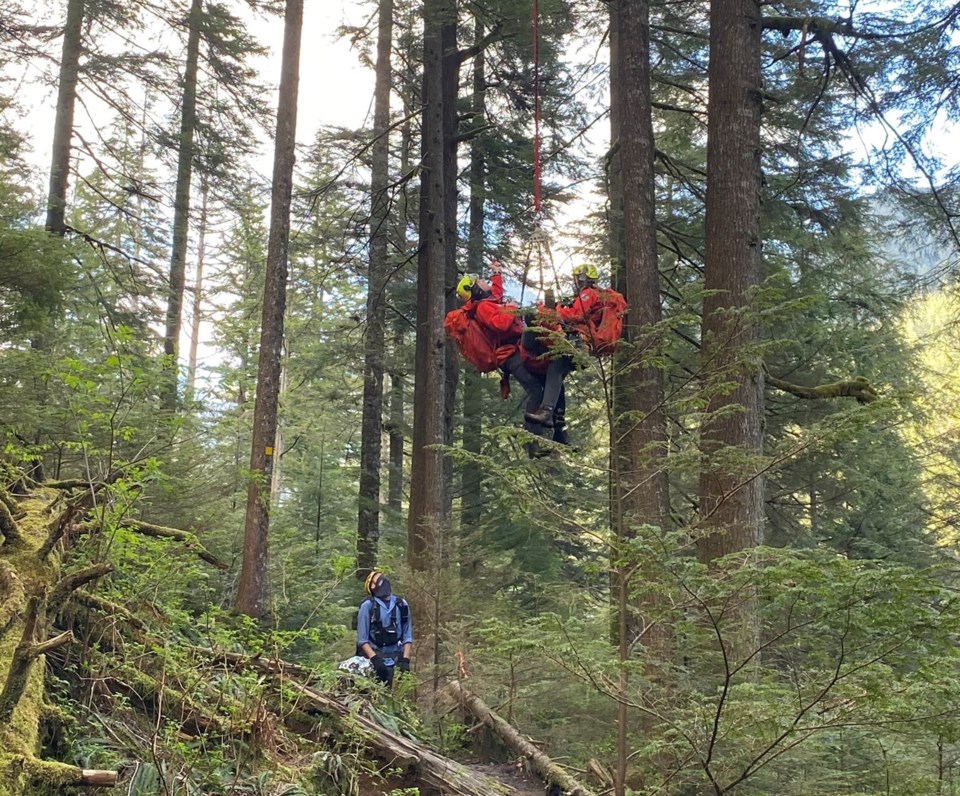 A North Shore couple’s weekend hiking adventure ended suddenly on Sunday when an unfortunate misstep on a North Vancouver trail led to a knee injury and a long-line helicopter rescue.

North Shore Rescue and District of North Vancouver Fire Rescue Services crews responded to calls of an injured hiker on the Big Cedar and Kennedy Falls trail, about 1:30 p.m. on May 2.

The couple had just passed the Big Cedar on the rugged hike – in the backcountry along the east side of Mount Fromme and to the west of Lynn Creek – when they ran into trouble, said Don Jardine, search and rescue manager for NSR.

“They had just passed the Big Cedar tree, which is a landmark on the Kennedy Falls Trail, and there was a one- or two-foot drop in the trail and unevenness,” he explained. “The husband sort of stepped through it and as his wife negotiated that part of the trail she twisted her leg and injured her knee."

He said the couple called for help as the woman was concerned she may have torn a ligament in her knee, and couldn't bear weight on it.

DNV Fire and Rescue Services team was first to arrive at the scene and administered first aid while awaiting NSR crews. Given the location, trail and distance, Jardine said a long line rescue with the assistance of Talon Helicopters was chosen instead of a stretcher.

“The helicopter wasn't able to land at the location where the subject was," he said. "So, we dropped a crew in via long line. They assisted with packaging her and flew her out to Inter River Park, down at the foot of the creek there, and BC Ambulance picked her up and transported her to hospital."

Jardine said while the couple hadn’t been on this particular trail before, they had hiked previously and knew what to expect from the local mountains. He said the woman just happened to have an unfortunate misstep.

NSR has successfully extracted the hiker with an injured leg from Cedar Tree Trail via long line. Ground teams from NSR...

He said the middle-aged couple wasn’t the first to run into trouble on the popular trail, and he advised hikers to download maps for the Big Cedar and Kennedy Falls Trail before venturing out. While it’s a heavily trafficked trail, he said a number of hikers have taken wrong turns and wound up lost in the wilderness over the years.

The out-and-back 10-kilometre intermediate trail, with a 150-metre elevation gain, takes roughly five hours to complete, leading to views of the falls.

“We have been getting a number of calls for help on that particular hike,” he said. “It goes up on the west side of Lynn Creek and it's not as well marked, it has a lot of mountain bike trails that kind of cross it, and for some reason, it seems to be a problem for a number of hikers over the last couple of years.

“It's basically just a one-way trail in and out and if you venture off the trail … you're headed into the wilderness and there's not necessarily a lot of other people around or support.”

With the weather heating up, he also reminded hikers to be aware of the changing conditions on the mountains higher up as the snowpack melts.

“If you're above 3,000 feet, you’re getting into the transition between the snow and no snow, so that can be something you have to watch for – quite often it rots out from underneath,” he explained.

He also encouraged hikers to always be prepared, check the weather, hike with a buddy, and let someone else know their plans.