A group of North Shore teens are being hailed as heroes after carrying out a dramatic rescue on Grouse Mountain Wednesday afternoon.
Feb 28, 2019 3:41 PM By: Brent Richter 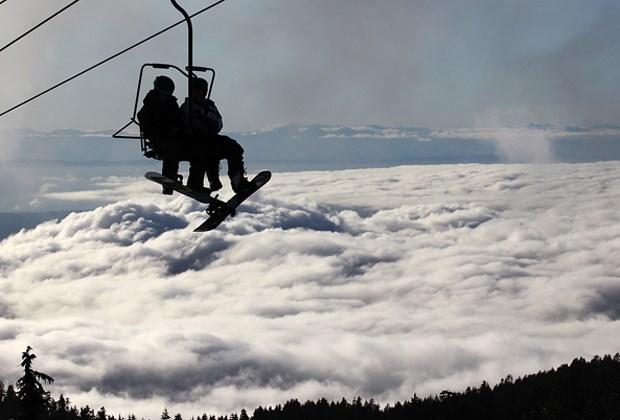 A group of North Shore teens are being hailed as heroes after carrying out a dramatic rescue on Grouse Mountain Wednesday afternoon.

The boys were skiing down The Cut when they spotted an eight-year-old boy who had slipped from the Screaming Eagle chairlift and was left dangling with his father desperately clinging onto him.

“The father was yelling for help. The kid’s screaming and the dad’s holding onto him by his hood and arm,” said James MacDonald, 14, one of the rescuers.

While some people were standing around, shooting videos and “doing nothing,” MacDonald and his friends jumped into action. They pulled up an orange snow fence and some pieces of padding, which they formed into a makeshift life net. They stopped other skiers to help pull the net tight under the chairlift.

“By the time this was all finished, the child was flailing about. He was going to fall any second. It was just like in the movies,” MacDonald said. “We told the dad ‘Listen, you just need to trust us.’ Eventually the dad did let go and (the child) landed with no injuries at all.”

The idea for a life net came straight out of Saturday morning cartoons, MacDonald said.

“Everyone was desperate so it was like, it’s got to work,” he said.

The boys said everyone on the ground remained calm despite the urgency of the situation.

Eventually, ski patrol members arrived and took over. The boy was taken to hospital as a precaution but, aside from being in shock, was uninjured. Apart from a few handshakes, the rescuers didn’t have much time to speak with the grateful family, MacDonald said.

Grouse Mountain staff brought the rescuers to the chalet, bought them fries and took statements for their formal investigation.

“They were very nice about it,” MacDonald said.

The resort released a statement the next day, thanking the amateur rescuers for jumping into action.

“Grouse Mountain is incredibly appreciative of those who assisted in yesterday’s chairlift incident.

“Their quick thinking and immediate actions are commendable. As a token of our gratitude we are providing those directly involved with a complimentary season pass,” the statement read.

“Safety is our top priority and we will be taking appropriate action based on the results of the investigation.”

“Given the circumstances, those quick-thinking boys did a great job, and I bet their parents are very proud of them,” he said.

“Given their instincts, I’d like to invite them all to consider training to become North Shore firefighters one day after they finish school.”

Neilson, 13, said he was a little wary about the word “hero” now being bandied about.

“I guess we did save him but I think heroes is maybe a bit much. I think we did our part and we did what was necessary,” he said.

MacDonald said he hopes the incident leaves people with a better impression of teenage boys than most maybe have.