Have your say on West Vancouver's plan to improve neighbourhood character

Residents have the opportunity to have their say on the district’s plan to improve neighbourhood character, increase housing diversity and prevent new out-of-place monster homes.

West Vancouver residents will have the opportunity to have their say on the district’s complex plan to improve neighbourhood character, increase housing diversity and prevent new out-of-place monster homes at a public hearing scheduled for next month.

However, maintaining neighbourhood character is an issue that has arisen over the past two decades, and many have tried to solve the problem before them.

Over 26 months, the working group embarked on a comprehensive process including extensive background research, technical analysis, and public engagement. The result was a 34-page report with 35 recommendations across six categories; reducing actual building size, encouraging suites and coach houses, limiting the visual impact of houses as seen from the street, more green landscaping, simplified building processes, and earlier neighbour consideration from builders.

“One of the key principles that the working group put forward was that, in seeking these solutions to issues that they identified, the intent wasn't to penalize homeowners or reduce the equity in their homes,” said Michelle McGuire, manager of current planning and urban design for the district.

“It really tries to strike a balance to offer homeowners more choice and flexibility, along with the improvements.”

The 35 recommendations were supported by council back in Dec. 2020. 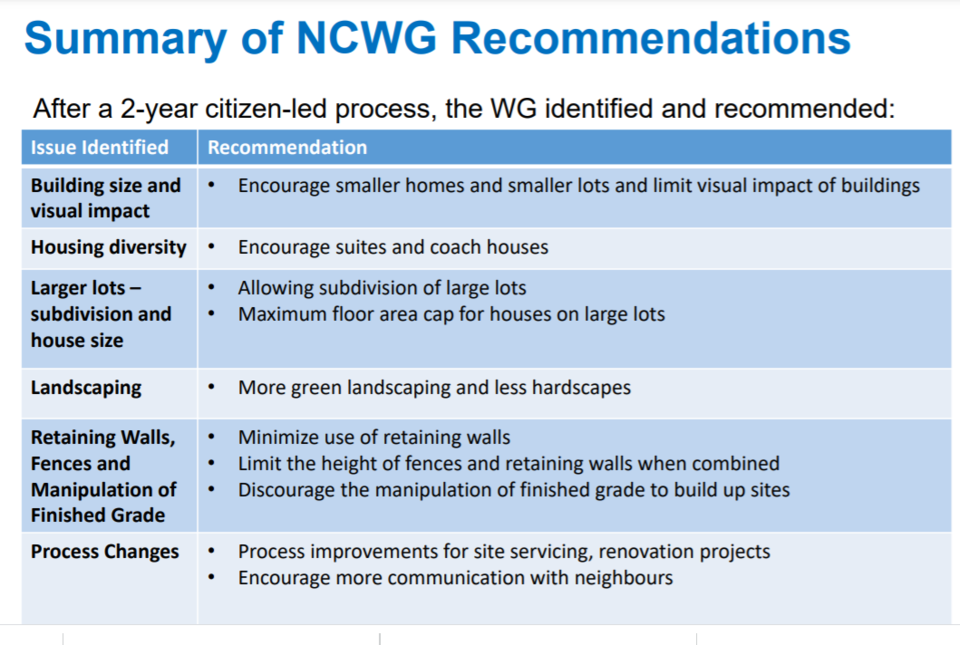 Since then staff have been working on a detailed review of the NCWG recommendations and how they can best be implemented.  Staff returned to council on June 28 with a plan to move forward and proposed amendments to the official community plan (OCP) bylaw, zoning bylaw, and six corresponding bylaws as well as updated coach house design guidelines, to make the vision of the working group a reality.

The boulevard bylaw, which includes landscaping and parking, and the soil removal and blasting bylaws are among the six corresponding bylaws being updated to support the recommendations.

“The amendments work together to improve and enhance single-family neighbourhood character across the district’s single-family areas,” McGuire said.

One of the main goals is to offer homeowners more housing options by creating bonuses to allow them to build coach houses and secondary suites, that would offset the proposed reduction in floor area for single-family houses, according to the staff report.

Back in the 1980s, floor area ratios (the area of the house divided by the area of the lot) were as high as 0.45 of the lot area and were later lowered to 0.35 plus buried basement along with other “bulk” modifications.

To encourage housing diversity, the working group suggested a bonus FAR for a secondary suite of up to 500 sq. ft. or a 0.05 FAR bonus, whichever is less.

For coach houses, the working team recommends a FAR bonus of 800 sq. ft. or 0.10 FAR, whichever is less.

“Coach houses and smaller homes on smaller lots allow new development to be integrated within existing neighbourhoods, add to the diversity and relative affordability of ownership and rental housing options,” the report states.

The bonus would be applied outright on lots with homes built prior to 1976, provided that the principal dwelling is retained.

“The intention of allowing this is to discourage demolition of older homes and encourage the development of coach houses on lots with older houses," the report states.

The amendments will also make it easier to subdivide a property, with changes to the minimum lot size needed for subdivision.

With a focus on keeping West Vancouver green, the changes also promote more green landscaping and less hardscaping to partially screen houses, walls, and fences from the street and boulevard designs that tie into the lots and surrounding homes.

“We know that we must move forward as a community,” she said at the Dec. 7 meeting. “We cannot return to the past. This group has done a commendable job of recognizing that fact and seeking the middle road.

“Their proposals seek to maintain the essence of neighbourhood character while encouraging the gentle densification that we need to expand our housing stock in this way.”

Feedback from the community on the final recommendations was positive, with more than 80 per cent of respondents in favour or offering no comment on most of the changes. The most contentious matter was changing the floor area ratio, but it still received over 70 per cent support.

The OCP and zoning bylaw amendments are proposed to be put into effect on January 31, 2022, pending council adoption to allow industry and property owners time to adapt to the new regulations.

The six corresponding bylaws are proposed to be effective immediately if adopted by council.

The public hearing has been set for July 27 at 6 p.m. in the Raven Room.

Read the full report to council or view a presentation on the changes to find out all the details.