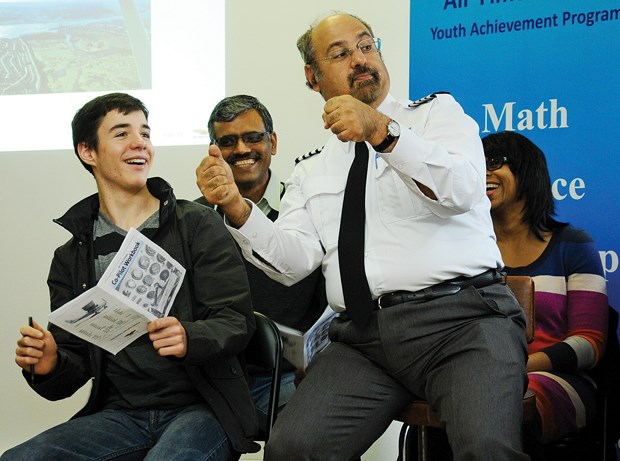 "Oh! I have slipped the surly bonds of earth, and danced the skies on laughter-silvered wings."

The American pilot John Gillespie Magee Jr. famously wrote these words in his short poem, High Flight, about the glories of aviation.

The same love Magee Jr. felt high above the ground also inspired one man to begin his own love affair with flying, and to offer the opportunity for aspiring pilots to experience what can be a prohibitively expensive thrill.

David Black founded Air Time Canada 20 years ago and has found a permanent home in the Lower Mainland for his passion project. The nonprofit organization's main classroom is at Delbrook Plaza in North Vancouver.

The company offers a variety of aviation-themed leadership programs on a cost-recovery basis. The most popular is Co-Pilot in a Day class, where students of all ages and backgrounds learn the basics of flying, such as how to talk with air traffic control, cockpit procedures, and basic airport operations. For $39 and eight hours of classwork, a teen or adult can learn about flying and then get the opportunity to fly for free alongside Black or his partner, Janine Cross.

The idea for Air Time Canada began decades ago, when Black was a volunteer at a youth detention centre, teaching high school math and physics to young offenders.

"The kids that were in the youth detention centre were all on the path to being at Oakalla (prison farm)," Black says.

A psychologist who worked at the centre used his interest in photography to connect with the troubled teenagers. Black noted that learning an art form or skill offered kids who had experienced a lifetime of hardship something positive to delve into, and taught them lessons that they might otherwise ignore.

Inspired by the psychologist's approach, Black used his enthusiasm for aviation to help those with a troubled past.

"You can't sit down with a troubled teenager, even a regular teenager, and say, 'Tell me your problems.' Teenagers just don't work that way," says Black.

Starting in a rented-out church basement with a handful of kids who had been vetted by corrections officers, Black began to teach the juvenile offenders tough lessons about selfconfidence and leadership. Black set up the program to be challenging, he admits. Only through teamwork would the teens succeed. After two days of intense classwork, the offender sturned-aviators would get the opportunity to fly, with each student filling a different role for each of the three flights that day.

One would be the copilot, tasked with actually flying the plane, while simultaneously talking to air traffic control.

The flight engineer, another young offender, would monitor the altitude, fuel, electricals and other gauges and switches of the plane as the flight progressed.

The navigational officer's duty was to create a flight navigation plan. The co-pilot was bound to follow the route, even if Black knew it was incorrect. It was then up to the navigator and the others to figure out if the route was wrong, and to correct it themselves, working together to get out of a jam.

After each flight, the kids would get out and change positions so each one had an opportunity to take every role as a crew member.

Despite the pressures and the possibility of danger, when the kids worked together they triumphed, and Black was always there to take over in the event of serious mistakes. As they succeeded, the youths received tremendous boosts to their self-confidence as they had taken on the hefty tasks asked of them.

While Black was achieving success volunteering with teens, he wanted to offer the service to the entirety of the corrections service. According to Black, however, he faced repeated roadblocks from the provincial government about establishing Air Time Canada as an official service in the corrections field, and instead decided to pay out of his own pocket.

He remembers the repeated objections from the provincial government over a seven-year period in the 1980s, though curiously enough, not about the obvious concerns of safety or cost but something more geo-political: the Cold War.

"Because of the political climate of the time, (the concern) was that the plane was going to get hijacked and we were going to end up in Cuba," says Black.

"I remember attending meetings in Victoria with politicians and bureaucrats, drawing this little map and showing that Cuba is completely outside of our range. It just wasn't enough for these people; they were absolutely convinced that 'these kids are desperate, they'll find a way.'" Black says he keeps up with a few of his previous students from his days as a volunteer, mostly through emails from parents giving updates on their children, though he has bumped into a few who have gone on to become commercial pilots.

However, the decision to open up the previously exclusive program was spurred one random morning when Black woke to see several women picketing on his lawn. "They were moms from a local home schooling group that really felt that this program should be available to regular kids too," says Black.

They were brandishing signs with slogans like "Why do only bad kids get this?" The sight of marching protesters at first angered Black, but he admitted, "It wasn't long before I thought maybe they're right, maybe other people can benefit from the program as well."

Opening the program to the general public yielded a great response in a short time. Black says Air Time Canada, "worked even better with untroubled kids because they were so much further along in their lives."

The man behind Air Time Canada is just as interesting as his passion project. In the past, he's held jobs as a bus driver, security guard, sailing instructor, taxi driver, a fish-packing plant manager and a chickendelivery driver.

Black graduated from the University of British Columbia in 1981 with a major in computer sciences. He currently works at Seon Design Inc. as the mobile surveillance equipment company's director of technology. While Black's day job might sound tame, it has seen him working with a variety of companies from Motorola to the Canadian Security Intelligence Service.

"I'm like a secret agent except I don't get all the girls," quips Black as he goes over his long and interesting career. When we first talked in early March, he had recently returned from Ukraine.

"It happened all around me, gun fights and grenades, it was very exciting," says Black of his visit to the city of Lviv, on Ukraine's western frontier.

"(The gunfire) was happening about two blocks from our hotel, and you know it's surprising, I never actually felt unsafe at all. It really felt like something that was happening over there, and it's got nothing to do with me.. .. It'd be foolish if I went out at night and joined the events - that would have been dangerous - but staying in the hotel wasn't an issue at all."

The following morning Black drove past the scene of violent confrontation, passing burnt out cars and buildings smashed and scarred by weaponry. According to Black, an angry mob had stormed a courthouse, killing the guards fortified within and proceeding to ransack the building, hurling furniture out, smashing the place up before finally torching the courthouse.

"My world travels have taken me to some interesting places. I've been shot at many times. I've done a lot of work for the U.S. military, been on many military bases and embassies and that's often put me in interesting places, such as Israel, Cuba, South America," says Black.

Black's work has funded Air Time Canada since 1994, and he has had almost 2,000 graduates, many of whom went on to fly recreationally.

The 38-year old software consultant's statement is in response to a question asking if his recent Air Time Canada class boosted his pluck. Talking with him over the phone one gets the impression that David Black's goal of giving his students the flying bug is something of a success.

After taking the Co-Pilot In a Day class, Nathoo took his flight and describes the feeling of aviation as incredible. Nathoo has been looking into signing up for flying lessons after the experience, with the only restraint to his newfound hobby being the cost.

"I've got no intentions of going pro or anything, but I definitely have the bug," says Nathoo before listing the ballpark figure of $12,000 for a private pilot's licence.

Describing the class as "light-hearted" Nathoo gives an example of the kind of whimsical fashion in which the classes are run. "We went outside and put our jackets on, drew a chalk runway and put our arms out and simulated being airplanes and practised our radio skills. (Black) would be like 'Keep your hands up, you have to keep them up or the plane will crash

into the ground.' He kept it really quite light." It was a fun class with not a lot of theory but lots of games and exercises, he says.

"(Black and his partner Janine Cross) are not doing it to make boatloads of money, just doing it for the love of it, and you can feel that in the way they deliver the course," says Nathoo.

"This is really truly a labour of love."