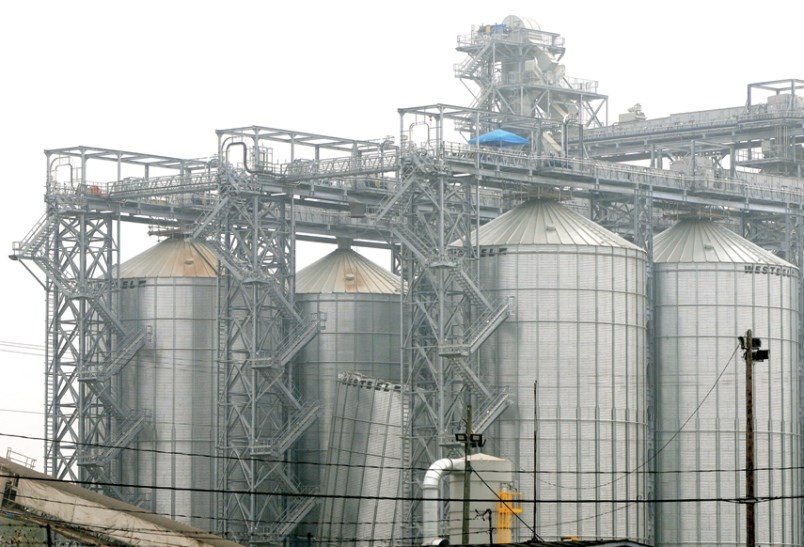 In December 2017, the company signed an agreement with AGT Food and Ingredients Inc. to shift operations to from wood pellet exports to agricultural products, which required them to build new silos, towers, conveyors, and other infrastructure, according to the statement of claim. In March 2019, they signed an agreement with Ag Growth International to design and build the new export facility.

The contract included a guarantee against defective workmanship, design and materials, which AGI and its subsidiaries would have to correct at their own expense, the claim states.

Even before the silo collapsed, Fibreco staff began raising concerns about the stability of the associated towers, according to the suit. Fibreco alerted AGI that the structural steel appeared light or possibly under designed.

“It was noted that when standing at the top of the first towers built, there was several inches of sway as people were climbing the stairs,” the claim states. “In response, the AGI defendants represented to Fibreco that the towers and related components were designed to code and that the design was suitable.”

In August 2019, Fibreco hired an outside engineering firm to assess the site, which concluded the towers and catwalks were under designed. Those results were shared with AGI but, still, the company insisted the design was suitable, the civil claim asserts.

During construction in September that year, a welded connection in a catwalk failed, which resulted in work being halted for an investigation.

As a result, AGI took responsibility and committed to do the necessary remediation work, the court documents state.

“As part of AGI’s investigation into the cause of the tower-related defects, AGI concluded that Deal had been negligent in the structural engineering and design work he performed on behalf of AGI, Westeel and Union Iron for the agriproducts facility, whereby Deal made a number of critical oversights, errors and omissions in his work, which necessitated numerous structural upgrades to the towers and related components to make them safe and compliant with all the drawings, specifications and applicable codes and standards,” the claim states.

Much of the substance of the lawsuit cites a formal complaint AGI filed about Deal with the Association of Professional Engineers and Geoscientists of B.C. in January 2021.

In that complaint, they said their investigation found Deal designed the towers to standards specifically related to radio towers, which are not applicable to towers at a grain facility. Deal did not adequately understand the software he was working on and the final shop drawings were not reflective Deal’s actual design work, Fibreco cites in the court documents. AGI also stated they found no evidence that Deal ever manually checked any of his computer calculations, “as sound practice would require,” the civil claim states.

“The foregoing was believed by AGI to be an egregious miscarriage of engineering because, had the tower weld connection not broken, it is unlikely that the issue would have been brought to the fore until a much larger and potentially catastrophic incident occurred,” the claim states.

AGI later terminated Deal and he resigned his registration to practice in B.C., according to the suit.

On Sept. 11, 2020, while the silos were being commissioned, the first one to be fully loaded with grain immediately failed and collapsed, the claim states.

Fibreco alleges AGI and the other defendants failed to apply industry building codes and standards, resulting in them “significantly under-designing the silos in key areas which rendered them deficient and unsafe for their intended use,” the claim states.

The suit lists numerous instances of design failures or botched calculations related to the structures’ ability to bear loads.

Even before the North Vancouver incident, a silo built by AGI with a similar design in Fox Creek, Alberta collapsed, killing two people, according to the claim. Fibreco says it raised their concern with AGI at that time, but the agribusiness told them the Fox Creek incident was the fault of the owners, the suit notes, and another set of silos by AGI in Surrey has now been put on hold pending substantial redesigns.

“The AGI defendants knew or ought to have known prior to delivery and during construction, that the silos, towers and related components suffered from dangerous defects,” Fibreco the claim alleges. “Further, the AGI defendants each failed in their duty to warn Fibreco of the silo defects, tower related defects and the potential for physical loss, injury and damage to occur.”

Despite demands for AGI to investigate and remediate the engineering problems, Fibreco states in its claim it has had to undertake that work with new contractors at their own expense and the entire facility remains off-line.

“As a result of the breaches and negligence of the AGI defendants, Fibreco has suffered or will suffer damages and losses in excess of $80 million,” the claim states.

Fibreco is asking the courts to award them general damages, special damages, payment for late delivery of the infrastructure, indemnity from any liability for claims by third parties, plus their legal costs.

AG Growth International has not yet filed a statement of defence, however the company did provide written comment to the North Shore News.

“AGI was an equipment supplier to a grain storage project in the Vancouver port. The project is owned and was managed by Fibreco. AGI is continuing to investigate the events of Sept. 11, 2020 and takes the incident and the allegations seriously. However, as the matter is now in litigation, AGI cannot provide further comment at this time,” it read.

Reached for comment, Deal said he had not been served with the suit.

“I know nothing about it and I’m no longer with that organization so I’m not sure how that’s even feasible because I didn’t sign off on anything,” he said.

Beyond saying the allegations were “incorrect information,” Deal said he had no further comment.