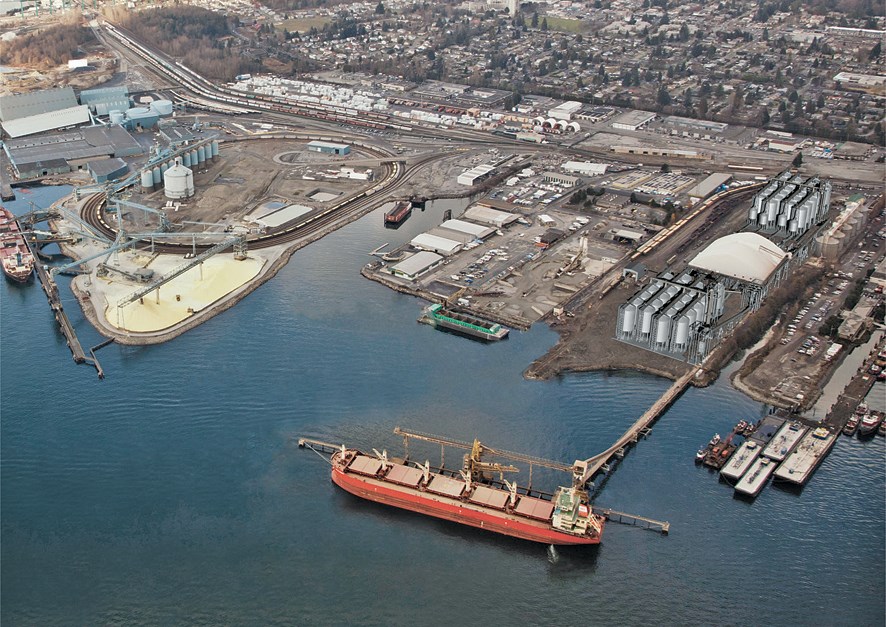 A North Vancouver port terminal that was the backdrop for the Liberal leader’s message about forestry jobs last week is in the process of scaling back the wood chips and wood pellets it handles in favour of agricultural products.

Fibreco Export Inc., a B.C.-owned port terminal on the North Vancouver waterfront, was front and centre April 27 when Liberal leader Christy Clark made a campaign stop to talk about the importance of the forest industry to the provincial economy.

“The biggest forest-dependent town in British Columbia is Metro Vancouver,” said Clark, after scooping up a handful of wood pellets for photographers.
“Loggers need mills, mills need terminals and terminals are an important well-paying employer here on the North Shore and throughout the Lower Mainland.”

But Fibreco is actually in the process of working to switch a large portion of the products it handles from forestry to agricultural products.

The company has an application before the Vancouver Fraser Port Authority for an $85-million project that would all but phase out wood chips and put less emphasis on wood pellets in favour of handling agricultural products like peas, beans and lentils.

The volume of both wood chips and wood pellets handled by the 40-year-old facility has fallen in the past decade.

In 2002, the volume of wood chips being handled by Fibreco peaked at 2-million metric tonnes, said project manager Glenn Dempster. Last year, that figure was about 221,000 metric tonnes.

That change is caused by a drop in global demand from markets like Japan, where the wood chips are shipped, said Dempster – less paper is being made and companies are buying chips from other countries.

To pick up the slack, Fibreco has applied to replace its wood chip piles by building 56 new steel agricultural storage silos on the terminal site, along with new covered conveyer systems. The storage silos would have a combined capacity of more than 170,000 tonnes. The tallest tower would be 56 metres high (180 feet) while most would be 38 metres tall (124 feet).

Dempster said there will be minimal visual impacts from the silos. Preliminary work on the project began back in 2015. A public open house is scheduled for this coming Wednesday.

If the project is approved in the coming months, the company hopes to begin construction of the first silos in the fall, and anticipates completing the project in the spring of 2019.

Perhaps ironically, the change away from forestry products will likely mean more work for port workers as the terminal gradually increases the volume of products it handles. Today about 50 people are regularly employed at the terminal. But that could grow by about 25 more, said Dempster. The company also anticipates fewer noise complaints as the project will eliminate the rolling of empty wood chip rail cars within the yard and bulldozers with their backup beepers.

Dempster said the goal of the project is to allow Fibreco – one of the Lower Mainland’s smallest port terminals – to stay competitive, while keeping neighbours happy. “Our goal here is to do this project and nobody notices,” he said.

An open house for the project will be held on Wednesday, May 10, from 5 to 8 p.m. at the Grouse Inn on Capilano Road.