Fatherhood, a restaurant and a pandemic: the joys and struggles when life's a Feast

In February, Geoffroy Roulleau was celebrating the arrival of his newborn son. Two weeks later he had to close his West Vancouver restaurant. It's now re-open and he's embracing all the challenges of this "new normal"
Jul 31, 2020 10:10 AM By: Martha Perkins 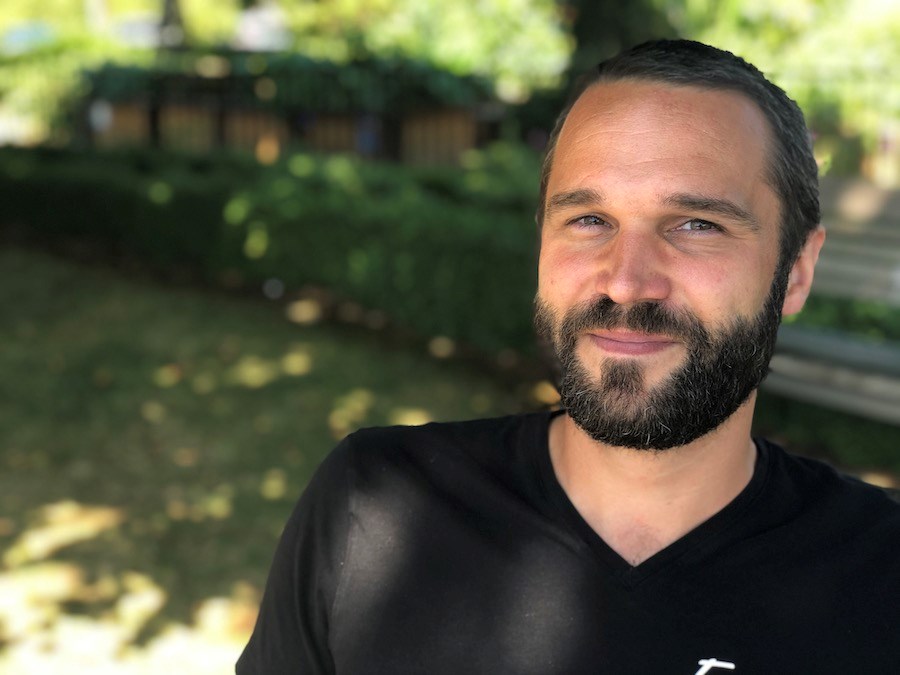 After nine miscarriages, Geoffroy Roulleau and his wife Yasmine were beyond thrilled with the birth of their son on Feb. 28, 2020. In spite of all the challenges of keeping his West Vancouver restaurant afloat during the pandemic, life with his new son has put everything in perspective.Martha Perkins LJI

On February 28, Geoffroy Roulleau was riding a wave of pure happiness.

After the devastating turmoil of nine miscarriages, he and his wife Yasmine were celebrating the birth of their son Naël. Naël’s arrival meant that Geoffroy — an old French name that sounds like je froid — wasn’t able to make it to the Vancouver International Wine Festival where his restaurant, Feast, was being awarded its first bronze medal.

Two days later, the Roulleaus were introducing their newborn son to the staff at their West Vancouver restaurant in part because they wanted Naël to be accustomed to the exciting hustle and bustle of the life that awaited him.

And then life as everyone knew it stopped.

Roulleau had already noticed a drop in business because of people’s anxieties over the spread of the novel coronavirus. He’d started at the Marine Drive restaurant as a server in 2014 and by 2016 he was general manager. The next year he bought the restaurant and threw himself into translating his passion for food and hospitality into the North Shore’s destination for “Pacific Northwest elevated comfort food.”

For Roulleau, owning the restaurant was a culmination of his entrepreneurial spirit and passion for food. He grew up in Brittany, where meals were a social occasion that lasted hours. He was committed to treating his patrons with the same care and consideration — not to mention provide them with well-crafted food.

“The people who came to Feast are not customers; they are guests,” he says.

He and Yasmine had come up with a plan on how to balance parenthood with two busy careers. Yasmine, a tech advisor and CEO of Striven Consulting, already had a home office. Geoffroy would work three nights a week so he could be the hands-on parent during the day when Yasmine was working. Since Yasmine’s parents lived nearby, they too would happily help take care of their first grandchild when needed.

By March 15, Feast’s staff was feeling worried about coming into work. Fewer guests were venturing into the restaurant. Aware of the virus’s impact in Europe, including his native France, Roulleau knew that there was no option other than to close. That night he told staff it was their last shift — a day before the B.C. government announced a ban of 50 or more people indoors, effectively shutting down the province’s restaurant industry.

“It’s one of the scariest decisions I’ve ever made,” he says. “I knew I might lose the restaurant. If there are no guests, there is no money and if there’s no money, we can’t pay our bills.”

“We thought, ‘If we foreclose we’ll be okay. It’s not a sign of me not doing a good job,’” he says. “That was a revelation and a freedom to be myself.”

Two weeks after closing, Roulleau and his head chef Johann Caner sat down to figure out how they could offer Feast’s menu as take-out. It’s not as easy as it sounds. Food’s flavour bursts are in part based on the short time it takes to get the food from the kitchen to the table; a closed take-out container stifles that. With the federal and provincial governments’ pledge to support staff and businesses easing some of the economic pressures, Roulleau and Caner took the first step towards embracing the “new normal:” offering take-out five days a week.

Modifications could be made to the restaurant to comply with health department rules but they’d cost $3,000 at a time of little or no revenue. Roulleau put on his handyman’s belt, went to the hardware supply store, and bought materials that allowed him to create safety dividers between tables. It cost him about $800.

He did all this while parenting Naël full-time during the day. Photos show him on the phone on a business call while working on his laptop in the kitchen, all with Naël strapped on his chest. People making take-out orders could often hear Naël crying or cooing in the background.

The 81 days that the Roulleaus spent in the province-wide quarantine intensified when Yasmine thought she had COVID-19. Fearing transmission to her son or husband, she went into self-isolation, commandeering the master bedroom while Geoffroy slept in a separate bedroom, leaving meals outside her bedroom door.

Apart from the stresses of those 10 self-isolation days, and Yasmine feeling deeply bereft of contact with her son, “they were the best 81 days of our lives.”

Fatherhood has touched Roulleau’s soul in ways he couldn’t imagine. “Time stops when I’m with Naël,” he says. “That’s why I work smarter. I am careful about the time I am away from him."

Roulleau is telling this story while sitting at an umbrellaed patio table at Millennium Park. “Being himself” seems to mean having an ability to come up with innovative solutions and tenaciously overcoming obstacles. In a tent next to him, the staff of Feast and Truffle House are preparing bistro-style lunches for patrons who welcome going out for a meal without having to go into a restaurant. On the other side of a temporary fence, patrons are also lining up to enjoy Savary Island Pie Company’s pop-up park dining experience. It’s all part of an initiative called Harmony Eats, fully supported by the City of West Vancouver.

It hasn’t been easy to get here and there are still a few hurdles in their way, chiefly the province’s refusal to grant them a liquor licence.

The liquor licence isn’t simply about being able to make a little bit more money — although at a time when restaurants’ capacity is cut in half to allow physical distancing and people are anxious to eat in restaurants, every penny counts.

Roulleau had to borrow money to stay afloat. His goal is to end the year with half of that debt paid off. To do that, he’s sought sponsorships. Two major supporters are Phillips Brewery and Le Vieux Pins Winery. The Feast patio at Harmony Eats will serve these beers and wines exclusively in exchange for their sponsorship. But until the liquor licence makes that legal, the sponsorship is in limbo.

He is also grateful for sponsorships from Park Royal and Milliken Developments.

“I never give up,” he says. It’s not a new revelation about his character but the coronavirus has definitely solidified it.