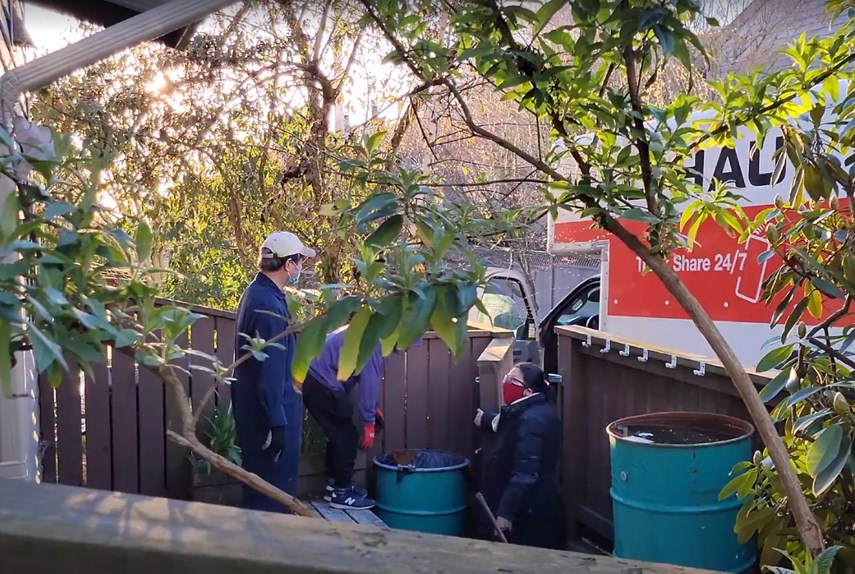 Emily Yu returned to her former North Vancouver townhouse on April 10. North Vancouver RCMP have confirmed she is now charged with breaking and entering related to the incidentDan Goldberg

Former illegal hostel hostess Emily Yu is facing a new criminal charge after witnesses reported her attempting to move back into her townhome, months after she was evicted and it was sold in B.C. Supreme Court.

After a protracted legal dispute with her strata, Yu did shut down her short-term rental business, which brought upwards of a dozen guests into the three-bedroom townhouse unit, but when she failed to pay back her strata’s legal fees as she was ordered to do, a B.C. Supreme Court evicted Yu in late 2020 and sold her suite to a new owner in early 2021.

Yu’s former neighbour Dan Goldberg said he was washing dishes around 7 p.m. on April 10 when he saw a U-Haul truck pull up to the lane behind Yu’s former townhouse.

“That struck me as incredibly unusual because the new owner is doing renovations. It's not likely that they'd be moving anything in or out. The house is more or less empty,” he said. “Right away, my spidey senses are tingling. She gets out of the truck and it’s Emily Yu.”

Goldberg recorded video footage as another moving van showed up and Yu directed professional movers to start bringing furniture inside.

“She walked through the back gate and entered the house, like, as if she had a key,” he said.

When Yu saw Goldberg recording, she left in the U-Haul. Goldberg reported it to the North Vancouver RCMP right away.

North Vancouver RCMP confirmed they were alerted to a break and enter in progress around 7 p.m. that evening

“Following an investigation, one female suspect was arrested and subsequently released,” said Sgt. Peter DeVries, North Vancouver RCMP spokesman. “BC Prosecution Service has approved one charge of break and enter against Emily Yu. As this matter is now before the courts, in order to preserve the integrity of the judicial process, we will not provide any further information.”

Goldberg said he was left beyond frustrated, seeing Yu back on the property.

“It struck me as so brazen and just so unusual that somebody would not just enter somebody else's home … but literally attempt to move into it,” he said. “I definitely lost a lot of sleep that night, wondering whether she could just enter that house and who knows, maybe go into the garage.”

No court date has been set for Yu’s latest charge, although she is due in court next week on one count of disobeying a court order, related to her previous attempts to thwart the forced sale of the townhouse.

Yu did not immediately respond to a request for comment.