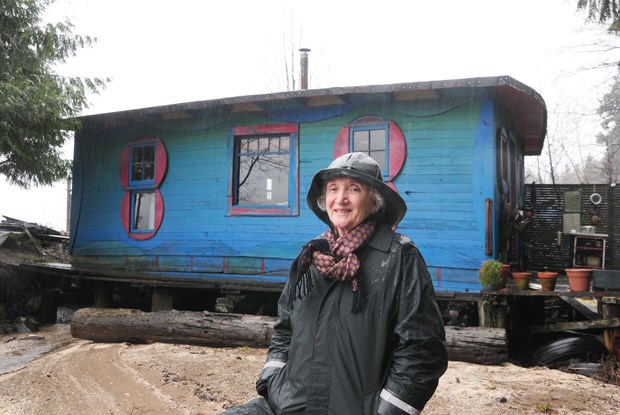 The historic blue cabin – a relic from the Dollarton foreshore’s time as a refuge for squatters, waterfront industry workers, artists and hippies – may be destined to become a place for the arts yet again.

The blue cabin committee, an ad-hoc group working to save the historic structure, is hoping to place the cabin on a barge, along with a small home, to act as a studio and residence for artists.

The cabin was where artists Al Neil and Carole Itter composed and created. It has been sitting at Canexus Chemicals since it was moved off the waterfront to make way for a Polygon condo development last year.

But before the historic building can float on the inlet, the consortium of artists attempting to save it are asking the district to float them some cash. The committee, led by Glenn Alteen, made its pitch for $10,000 in seed money at council on Monday night.

Coun. Lisa Muri led the effort at council to put up the money from council’s contingency fund to do some basic remediation work in the name of saving a piece of North Vancouver history.

“It’s something that is dear to many people and in this time of such great change in the Lower Mainland, particularly on the North Shore where we’re seeing so many things torn down. ... it’s hard for many of us to see such change. It’s certainly hard for me. I don’t think I’ve ever been very open to change,” she said. “It’s a small amount of money, council, to retain a very historical part of our community.”

Despite some initial concerns, Coun. Doug MacKay-Dunn also sided with preserving history amid the tide of redevelopment.

“We risk forgetting our past. This blue cabin is a link with the unique history of our community and a contribution,” he said.

Council was split, however. Coun. Robin Hicks spoke against giving the grant in aid of a “dilapidated hut” when there are so many more pressing funding needs from the district.

“I think $10,000 is not an insignificant amount that could be used to help the homeless or more charitable endeavours within the district,” he said.

The next item on council’s agenda, was a similar emergency funding request for the North Shore Community Resource Society’s community housing action committee, which passed unanimously.

Coun. Roger Bassam too warned against “throwing good money after bad,” especially given the condition of the cabin.

“Essentially the entire exo-structure is rotted on the perimeter on the bottom two feet. The whole thing has to be rebuilt,” he said.

There’s no way the cabin could be brought up to code in order to get an occupancy permit, he added, and there are also no clear answers on how it can receive heritage protection while being placed on a movable barge.

“The heritage value is in the esthetic, which probably could be reproduced. You may actually find much better cultural value in recreating this from new – a replica,” he said.

It’s true, big questions remain, especially about logistics, legalities, feasibility and governance over the cabin, according to Alteen, but the fundamentals of the project remain strong, he added.

“The thing is structurally sound. There’s a lot of life left in it,” he said. “Ten thousand dollars is not going to remediate the cabin. But it is going to buy us time to get that cabin up to snuff so it does live through the next 10 months while we’re planning the project,” he said.

The vote to fund $10,000 in remediation work passed 5-2 with only Hicks and Bassam opposed.

The one-year lease at Canexus Chemical is up in June, with the option to renew the lease for another one year.