Bicycle commuters in Lower Lonsdale say their lives are being put at risk since the City of North Vancouver moved the pick-up and drop-off zone for the SeaBus right next to a painted bike lane.
May 24, 2019 6:00 AM By: Brent Richter 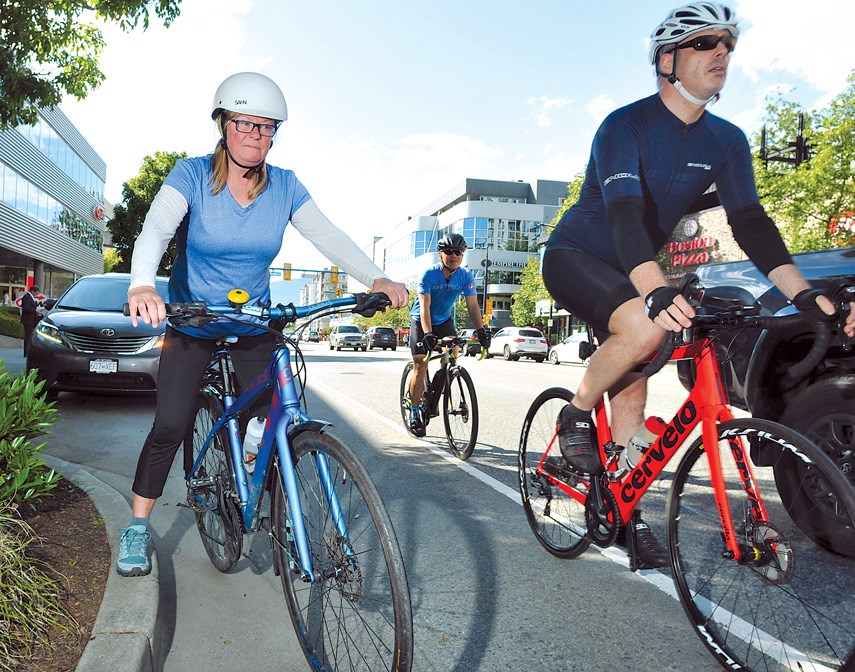 Bicycle commuters in Lower Lonsdale say their lives are being put at risk since the City of North Vancouver moved the pick-up and drop-off zone for the SeaBus right next to a painted bike lane.

At the end of April, the City of North Vancouver moved the SeaBus kiss-and-ride from Chadwick Court to the 100-block of West Esplanade to accommodate a major renovation of the Lonsdale Quay bus exchange.

Esplanade is already regarded as one of the most dangerous stretches of road on the North Shore for cyclists, according to HUB North Shore chairman Don Piercy.

“Currently, the cycle lane is wedged between a busy arterial truck lane and it’s in the door zone of parked cars. There’s just no room for error there. There’s no buffer. If someone swings a door open in front of you, you don’t have an option,” he said. “We really need that fixed and they’ve just made a bad situation much worse.”

On Jan. 27, North Vancouver resident Mike McIntosh was killed on the north side of West Esplanade when the driver of a parked car opened their door, setting off a chain reaction crash that knocked McIntosh under the wheels of a moving truck.

According to North Vancouver RCMP, the investigation is nearly complete, and may result in a Motor Vehicle Act charges.

On Tuesday, bike commuter Kevin Hay documented a near-miss from his bike-mounted camera in the new drop-off zone. Hay’s video posted online shows the driver of an SUV pulling into the bike lane, apparently not noticing the man riding beside her.

“He just squeaked through. He yelled at her as he went through and I think that’s why she stopped. I could see her head was in her hands. … She was quite stressed about it and he was also stressed about it,” he said. “They didn’t seem angry about it. They were both very thankful that nobody was hurt.”

Hay suggested the city try narrowing the vehicle lanes, which tends to slow drivers down, and using the gained space to add a buffer zone for people on bikes. He also suggested, in the short term, painting the lane green to make it more visible to drivers.

Close calls like the one he witnessed on Tuesday are partly the reason Hay got a camera for his bike.

“If something happens to me, let’s face it, I’m going to lose the battle every time. If I’m knocked unconscious, I want to make sure I have evidence of what happened,” he said.

In a statement, city spokeswoman Stephanie Smiley said the safety of the travelling public is a priority for the city.

“Staff are making improvements to the Esplanade drop-off zone, including painting the bike lanes along this stretch green and installing new signage, to increase awareness and visibility,” the statement read. “We are also working on long-term, permanent solutions to address concerns related to cycling infrastructure on Esplanade. We will continue to work with TransLink and the RCMP to ensure people moving through the area, no matter what mode of transportation they use, are able to do so safely and efficiently.”

The construction project at the bus loop is expected to last until early 2020.

TransLink also issued a statement, saying the transit authority would work with the city to “minimize any disruptions and ensure the safety of anyone who might be impacted by construction at the Lonsdale Quay bus exchange,” spokesman Ben Murphy said. “While the city is responsible for the traffic management plan related to cycling, we are all interested in assisting commuters in the area as they adjust to recent changes in traffic patterns.”