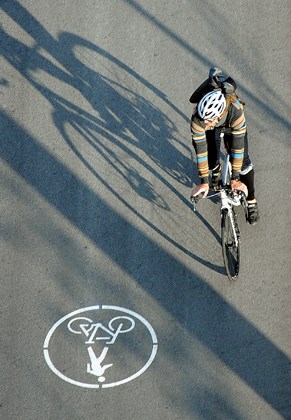 The City of North Vancouver has adopted a new long-term vision for the city's bike lanes, which could cost in the neighbourhood of $20 million or more.

Called the All Ages and Abilities Bicycle Network, the AAA network builds off city council's plan established in 2012. The AAA routes will be larger, wider and separated from car traffic with the intention of encouraging cycling and protecting both cyclists and drivers from harm.

Five options for the AAA network were presented to council by city staff, from the least to most expensive, with the fifth option suggested by staff as the best.

"Our estimated cost for option 5 could cost as much as $20 million, more than we currently have allocated in our 10-year plan," said Douglas Pope, a city engineer and director of the City's Engineering, Parks and Environment department.

"Our current estimate is in the range of $9 to $20 million. There is such a large range in estimated costs, as the designs have not yet been completed. We will be looking at each block on the route individually and we expect some blocks can be implemented with minimal cost, while others will involve more significant road works," said Pope.

The plan will feature AAA expansion on arterials such as Chesterfield Avenue, Queensbury south of East Keith as well as East Keith itself, while also expanding along local streets like 14th and 13th, St. Davids, Jones and Mahon.

Overall, more than 15 kilometres will be added, at a projected cost of one million per kilometre.

Heather Drugge, a cycling advocate with cycling group HUB, said the cost would be stretched out over decades.

"If I'm alive by the time this thing is built out, I'll be shocked. Well, I'd be pleased first, but second, I'd be shocked," said Drugge.

Drugge, who presented the case for the AAA network to city council, said of the 2012 plan that the bike lanes were "just painted lines."

"In painting lines, (Council) would just be throwing good money away," said Drugge. "You'll spend a million bucks just painting lines and all you get is the same people who already cycle."

"Study after study shows that the reason people aren't cycling isn't because of hills or rain, its because they don't feel safe," said Drugge.

Council passed the motion on Feb. 24, though not without dissent.

"We want the best return to our community in terms of successful transportation for all transportation users.. .. Drivers have the right to not feel like second-class citizens," said Coun. Pam Bookham.

"Let's take a look at transportation budgets over the last century and we'll find out who are really second-class citizens when it comes to transportation," replied Coun. Craig Keating.

City mayor Darrell Mussatto echoed Drugge's sentiments that bike lanes are about safety for cyclists, as well as drivers.

"I don't think I'd want any member of my family in an unsafe area," said Mussatto. "It takes a very skilled rider to ride in traffic. Drivers don't need to fear hitting cyclists, either."

"(The new AAA plan) requires some creative thinking on behalf of our staff and council," said Mussatto. "It doesn't mean eliminating tons of parking or car lanes, as people have done in Vancouver. We can be more creative."