The changes will mean transitioning from natural gas heating systems to low carbon heating systems in the construction of new small residential buildings mid-next year.
Nov 21, 2020 7:30 AM By: Elisia Seeber 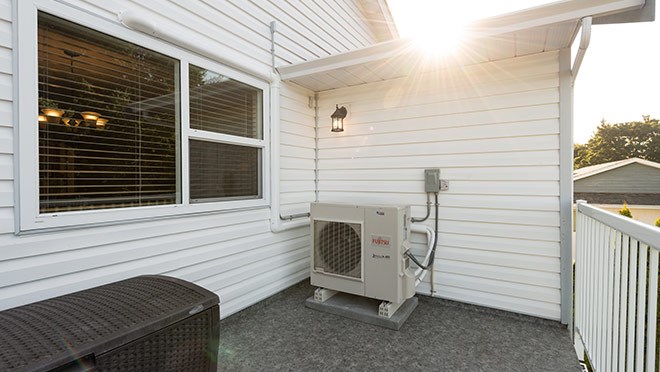 The City of North Vancouver is continuing to step towards its goal of net zero emissions by 2050, endorsing new measures to building regulations that will dramatically decrease the city’s carbon footprint.

Council voted unanimously in favour of making changes to the Construction Regulation Bylaw, introducing a low carbon compliance pathway for new buildings, as part of the city’s BC Energy Step Code, at Monday’s general meeting.

The change will mean transitioning from natural gas heating systems to low carbon heating systems in the construction of new small residential buildings starting in the middle of next year.

Speaking at the meeting, Mayor Linda Buchanan said when it came to the climate crisis, the city had to take “bold, progressive action moving forward.”

Half of the city’s greenhouse gas emissions, on a community-wide basis, are attributed to building energy use, according to a staff report prepared for council.

“These emissions are primarily due to space and water heating using natural gas heating systems,” the report states.

“Transitioning to electric and other low carbon heating systems represents a significant opportunity to reduce emissions from buildings and will be a critical strategy in achieving the city’s emissions reduction targets.”

Making the switch is estimated to result in a reduction in greenhouse gas emissions of over 1,500 tonnes, the equivalent of taking almost 500 passenger vehicles off the road over the next 30 years, according to the report.

The city introduced BC Energy Step Code requirements for all new buildings in December 2017, becoming one of the first municipalities to do so. It’s an incremental approach that local governments can use to encourage or require a level of energy efficiency in new buildings that goes above and beyond the usual building code requirements.

This latest change will see requirements for simple buildings – three storeys and under – including single-family homes, duplexes, coach homes and some townhouses move from Step 3 to Step 5, the highest step, which is similar to a net zero building performance. But the city has also included an option to enhance Step 3.

After meetings with stakeholders and conversations with industry experts, staff found there was general support for pursuing low carbon requirements for new buildings as a response to the climate crisis, but there were concerns over gaps in technology.

“Significant challenges remain for air-to-water heat pump system installations due to a lack of technology available on the market and a lack of industry installation capacity and experience.”

To address gaps in technology, the bylaw will require that low carbon energy system homes meet an overall greenhouse gas intensity limit of 3 kg CO₂ e/m²/year for the building, and the city is allowing builders the flexibility to choose how they do this.

In terms of cost, staff said a study commissioned by the province found adding the low carbon energy system bylaw was less than one per cent of the sale price of a typical new single-family home.

Changes will also be made to the requirements for complex buildings – larger buildings over three storeys including multi-family residential, commercial and institutional buildings – to standardize the energy efficiency requirements that are largely already in effect, for greater administrative efficiency.

The city has collaborated with the neighbouring North Shore municipalities regarding the Energy Step Code’s requirements, and all intend to introduce a low carbon compliance pathway to take effect in 2021.  Once council adopts the new bylaw, requirements will take effect on July 1, 2021, in line with the District of North Vancouver’s expected timeline.

Buchanan said the city needed to continue looking at innovative ways to address climate challenges while moving forward with constructing buildings as affordable as possible, mentioning the importance of continued research, post construction analysis and communication with stakeholders.

Council upped its game on climate change in February last year, committing to a community-wide plan to reduce greenhouse gas emissions by 80 per cent by 2040 and net zero emissions by 2050, and directed staff to incorporate these targets into plans, policies and business practices.

The new city climate targets came after the International Panel on Climate Change released a report in October 2018 that warns urgent and unprecedented action is required over the next decade to avoid the most far-reaching effects of climate change.