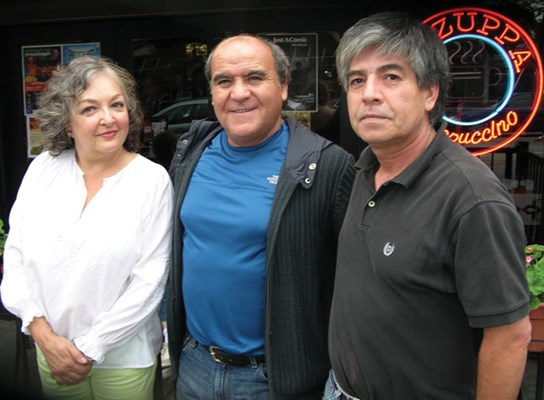 One of the Chilean miners who spent more than two months trapped deep underground last year described his nightmarish ordeal to a rapt audience in North Vancouver Saturday.

Franklin Lobos, 54, came to promote a fundraising ballet performance that supports reconstruction in Chile after the earthquake and tsunami that also struck his country in 2010. Partnering with Habitat for Humanity, Together for Chile plans to rebuild a school in Santiago.

"We really want to help these children have a school again," Lobos said in Spanish, speaking through translator Jose Miguel.

Welcoming Lobos to La Zuppa restaurant, Victoria Bakich said many of the dozens of people there Saturday had also gathered to watch the rescue unfold.

"Our families and Chileans and everyone who prayed for us, they are (responsible for) us being here alive," Lobos said. "I think God heard."

On the afternoon of Aug. 5, 2010, Lobos was working underground in the San Jose copper and gold mine. It was a 15kilometre trip to the surface along the mine's winding access ramp, and he had 700 metres of mountainside vertically above his head.

Only 20 metres away from him, hundreds of thousands of tonnes of rock suddenly gave way, completely blocking the access ramp and cutting the power and telephone lines to the surface.

Quickly realizing how completely trapped they were, the men gathered together and Lobos reached for his faith.

"We realized there were 33 of us and actually I was the one who said 'That's how old Jesus was,'" he said.

Lobos said they put their chances of survival at one to two per cent. They were all acutely aware, he said, of a similar accident in Mexico where the trapped men were underneath 70 metres of rock.

"They just let them die," he said. The conditions he and his coworkers faced, Lobos said, were "inhuman." The gallery they took refuge in was a constant 40 C with 90 per cent humidity. With only two cans of tuna between them, they rationed out a teaspoon per man each day - then every two days, then every three. Their only water was the muddy, contaminated groundwater that seeped into the mine. Some miners wrote last letters to loved ones before the makeshift lamps fashioned from equipment batteries and lightbulbs went out. The mountain continued to heave and crack around them.

"We kept ourselves united," Lobos said. "Teamwork was really important and no one ever tried to get more than one teaspoon. We always kept an eye on each other and made sure no one wandered off into the mine to do something stupid. We never let anyone be by themselves."

The miners had no idea that on the surface, a massive rescue operation and frenzied global media attention had descended on the site and that probes were being drilled in the faint hope of finding survivors.

For 19 days, the 33 men waited in the suffocating darkness. "My happiest day wasn't actually when I got out," Lobos said, "but when the first probe got into the gallery. Then they knew we were alive."

Lobos had lost 18 kilograms by the time the first supplies came through.

The men attempted to establish some normalcy, and set up a three-shift work schedule. But while their physical conditions improved slightly, Lobos said, they were still suffering mentally.

"The psychological work was hard. You try to give advice to one of the young ones, but inside you're in the same position, hopeless. Many of us still carry psychological scars. One of us is in a medical facility. Sometimes I wake up in the night thinking about what I'm doing right and wrong . . . It's really complicated to make friends after you've been rescued. But we have to carry on with our lives. Sometimes you think it was only 70 days down there, but it wasn't. It was years. We lost years of our lives and we won't get them back."

After another 50 days, a NASA-designed pod was ready to start lifting the men to freedom. The day of the rescue, Lobos said, part of the gallery began to cave in, and the atmosphere was panicked.

"It's really hard to find a reason why we're here. I was really, really lucky," he said.

Lobos was the 27th man to ride the shuttle. He spent nine minutes being hauled up in a 55-centimetre-wide pod. The scariest part, he said, was the transition from bare rock to the steel tube near the surface.

"It felt like I was going down again, and I thought, 'I'm going to be the only guy to die in here,'" he said.

At the surface, he was greeted by his daughters Claudia, 21, and Carolina, 27, who had kept vigil at the mine. "I didn't really care about all the people there, I just wanted to see my daughters."

Lobos was ambivalent when asked if he thought the disaster had led to safer mining practices in Chile. The mine had seen fatal accidents before and Lobos, like many others, had been attracted to the high pay that accompanied the risk.

"I hope the companies have learned something from this," he said. "And not all companies are bad. Just after the accident everyone makes promises, but time goes by. Actually, two days after we were rescued there was another accident and two miners died. Since then between 20 and 30 miners have died, so I'm not sure how big those changes are."

Lobos was asked how the experience had changed his life. As a young man, he said, he had been a professional soccer player. But after retirement, he had separated from his wife and become estranged from his daughters.

"But after the accident," Lobos said, "I recovered my family. I'm back with my wife now and I reunited with my daughters as well. I'm really enjoying watching my granddaughter grow. We're really united as a family and I try to show my feelings. But you shouldn't wait to go through what I did to tell the person next to you that you love him or her."

Lobos was promoting a performance by the National Ballet of Chile, at Queen Elizabeth Theatre Oct. 6. For information visit www.bafonatour.com.