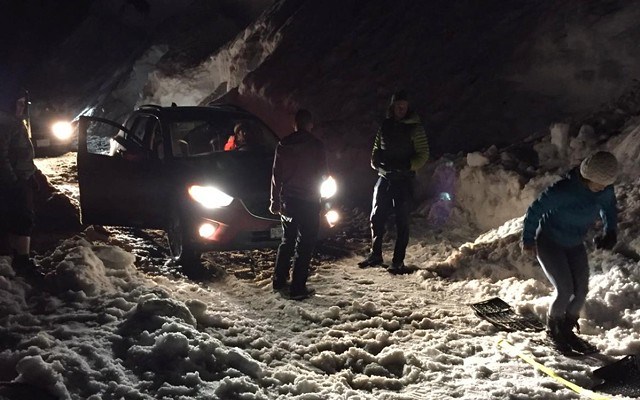 Around 15 people found themselves digging through a small avalanche on the Lillooet River Forest Service Road on Saturday March 16.

A small avalanche trapped around 15 people on the Lillooet River Forest Service Road on Saturday, March 16, turning a leisurely afternoon at the Keyhole Falls hot springs into a harrowing ordeal.

Caroline Labrunye—who was with her mom, brother and a friend—said she returned to her vehicle at around 7:00 p.m. to learn of the slide, which took place at approximately the 40 kilometre-mark of road.

The slide, she said, was approximately one-metre tall and and two car-lengths long.

According to Labrunye, approximately 15 people, five carloads, banded together to dig out. "Everyone helped each other, and everyone had something to do," she said.

At first, the group tried to pack down the snow with their feet. But when a car tried to make it over, it got stuck.

Then people began to shovel the snow using "planks of wood," their hands, and "anything they found in the car." No one had a shovel with them.

Things were made worse by the fact that there is no cell-phone coverage in the area—so no one could call for help.

Another vehicle, a truck, ended up towing the car out before trying to make it over as well. It too got stuck.

Eventually, a small, all-wheel drive vehicle turned up on the other side of the slide. It managed to tow the vehicles out, explained Labrunye.

After a long drive down the road, which Labrunye said was in rough shape, the group was finally in cell phone service.

Labrunye posted a note to the Whistler Winter Facebook page to warn others of the dangers and importance of being prepared.

"If anyone wants to adventure there, you should be more than prepared with (shovels) carpets for the wheels, sleeping bag etc. In case you need to sleep there!" she wrote. "We all got (out) safely after many hours of digging the snow and pulling the cars."

Labrunye said she has access to a satellite phone at home, but didn't think to bring it that day. "We usually bring it for backcountry touring, but we were just going in the car, right? Nothing too fancy," she said.

She also warns against parking at the end of the road, which she said is just passed an area that is especially prone to slides.

With the first major warming system well underway—temperatures are predicted to hit 15 C in Whistler this week—Avalanche Canada is warning of a destabilizing effect in the snowpack.

It has put out a danger rating of "considerable" for alpine, treeline, and below treeline areas in the Sea to Sky region.

When people think avalanche, they may typically think of the far-reaches of the backcountry. But Labrunye's experience highlights that they can also take place on our roads.

"Right now, for sure, there will be more avalanches, because it's all melting and the freezing level is pretty high," she said.