El Nino’s warming effect likely behind comeback in northern waters, a boon for feeding salmon
Sep 4, 2016 11:00 AM By: Jeremy Shepherd 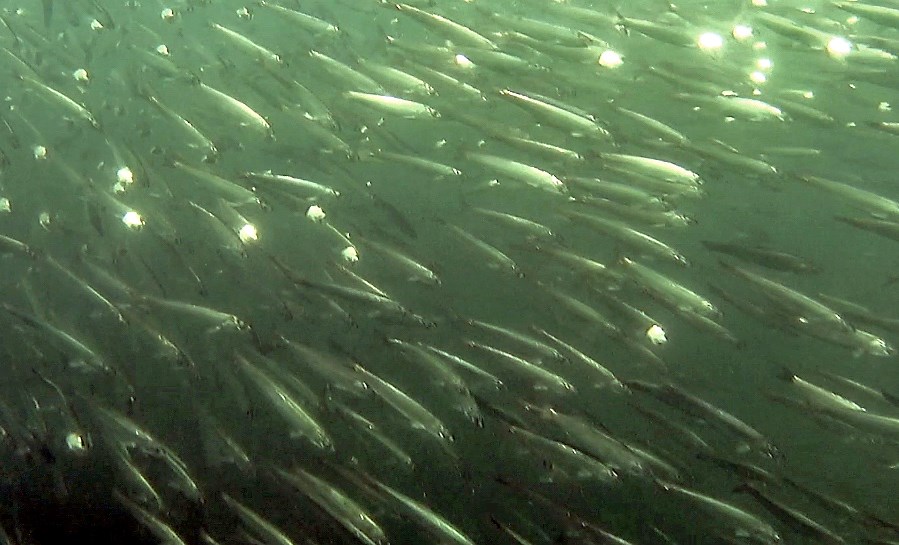 There’s an oily presence in Howe Sound this summer, and it doesn’t have anything to do with tankers or pipelines.

Abundant anchovies have been feeding salmon throughout the Strait of Georgia, according to Dave Korsch, a guide with West Vancouver fishing company Predator Charters.

“I’ve never, ever in my 30 years seen anchovies in the area like this,” he said.

While herring are typically the dominant little fish around Howe Sound, the warming weather of El Nino seems to have brought an influx of itinerant plankton-eaters.

“We’ve been on the northern end of their range. I guess maybe we’re becoming more in the middle of their range,” Korsch suggested.

Anchovies typically linger near Horseshoe Bay for about a week in May, but this year has been an anomaly, Korsch reported.

“Even yesterday I saw a school of juvenile anchovies in Horseshoe Bay,” Korsch said. “It’s great for the fish.”

Coho are noticeably plumper this season, according to Korsch.

“This is the first year I can ever actually recall seeing anchovies in the belly of fish,” he said.

Enrolment in anchovy schools may have been highest off the southwest tip of Bowen Island, Korsch said, where “You could’ve sit on the rocks … and caught chinook passing from shore.”

A frequent ocean swimmer, Turner said he literally bumped into a school of anchovies earlier this year.

“You can tell a school of anchovies from herring because they flash like a sea of pearls.”

He ended up photographing the small, big-mouthed fish, and subsequently heard reports of anchovy sightings near Porteau Cove, Vancouver Island, Horseshoe Bay and the Gulf Islands.

“Not only are anchovies everywhere, but they seem to have spawned widely,” he said. “There’s a whole new generation of anchovy in the Salish Sea.”

While the cycle may bust when temperatures dip, it’s certainly booming this year, Turner noted.

Anchovies provide a plentiful food source for salmon and seals, which may in turn benefit Howe Sound’s orca population.

“In the last three years, something extraordinary has happened. The abundance of orca in Howe Sound has just taken off,” Turner said, explaining his belief that anchovies are part of that resurgence.

“That’s my conjecture but I haven’t heard of a better idea yet.”