A handful of allies for troubled youth 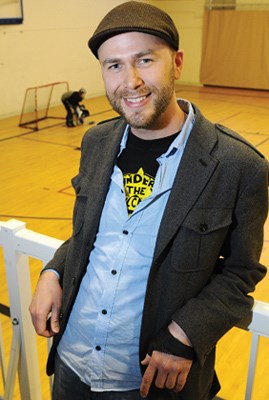 IT wasn't long ago that Mo Ali found himself hanging out with the wrong crowd and often getting into trouble.

"I would be going out with my friends and we would really be doing nothing. Sometimes that nothing would lead to doing bad things. . . . Sometimes leading to the wrong places or the wrong houses," Ali said.

Ali, who did not want his real name used in order to protect his family's honour, said he and his friends would sometimes vandalize things or smoke weed. However, that all changed when he met Capilano Youth Services Society worker, Pejman Pirgheibi.

"When I met Pejman, he gave me a lot of other things to do," Ali said. "He showed me how I could use the services to my advantage."

Ali was connected with Capilano Youth Services Society through a counsellor at Carson Graham secondary. Pirgheibi remembers the day he met Ali.

"He seemed just a little bit lost and nervous about the city because he didn't really know too many people. When his counsellor referred him to me we connected right away," he said. "I could see myself in him and I'd had some of the same experiences as him."

Shortly after their first meeting Pirgheibi gave Ali a gym pass and they began working out together.

Capilano Youth Services Society, often referred to as Cap Services, offers one-on-one support with at-risk youth between the ages of 10 and 24. Pirgheibi along with two other outreach workers provide all types of support for youth in North Vancouver.

Ali moved to the North Shore four years ago and was enrolled in Carson Graham secondary for a short time before attending Keith Lynn alternative secondary.

"My mom and dad had recently split up, and that was pretty much one of the reasons why I moved out," he said. "Coming here and not knowing anybody was pretty difficult because I didn't know what people were like."

Ali and Pirgheibi are both of Persian descent, which made it easier for Ali to open up and talk about his problems.

"He can relate with the background of how family is in our culture," Ali said. "If I tell him about the problems at home he can understand it better than someone who is not familiar with the culture because he is of Persian descent."

"Growing up I had similar issues that Ali has had. I knew what it felt like to bring an A home and be asked why I didn't get an A plus," Pirgheibi added.

According to Ali a large part of why it was difficult for him to open up and talk to his parents about his problems was because of his parents' background.

"I don't think they could relate. Especially considering how they used to live in Iran. It's very different growing up here. It's completely different from how they grew up," he said. "I know if I told them anything they would take it the wrong way."

Capilano Youth Services Society was formed in 1970 after a riot involving youth occurred in Edgemont Village during the late 1960s.

"There was a mini riot involving young people in Edgemont Village," Pirgheibi said. "As a result, the community felt there needed to be some support for youth so that they had some stuff to do."

Since then Capilano Youth Services has grown and now offers after-school programs for grades 6 and 7 students. The intent is to allow elementary students the opportunity to form relationships with the outreach workers by the time they reach high school.

"We do work in the local high schools here," Pirgheibi said. "They can just drop in and it's very informal. We focus on relationship building . . . because we can't work with young people unless we have built a relationship with them."

Youth are mainly referred to Cap Services from counsellors at local high schools but there are many other ways to get a referral.

"You could be referred to us from your probation officer," Pirgheibi said. "You can hear about our service from your parents or you could self-refer, which a lot of kids do."

If parents want to send their kids to one of the outreach workers but the child doesn't want to go, there isn't much he can do.

"Often times we will get parents stressed out saying, 'My kid is smoking weed. Can you work with them?'" Pirgheibi said. "That's not something we can really do unless the kid wants to hang out with us."

The outreach workers often take the teens on trips where they do fun activities such as gardening, hiking, paintballing, and rock climbing. The youth also help out the community by giving back.

"I've done a lot of volunteer work, helping out the homeless and working at a soup kitchen. It feels nice," Ali said. "It makes me appreciate that I can go home and have something to eat."

Ali has come a long way since meeting Pirgheibi three years ago.

"I've noticed that I can now talk to a wide variety of people," Ali said. "Not just people my own age but adults as well."

He still uses Cap Services and has become an example for other youth. Ali was able to transfer out of Keith Lynn and will soon graduate from a mainstream high school in the North Shore.

"He has worked very hard on his own to work hard in school and to find a job," Pirgheibi said. "He went from shy and lost to a sharp, bright young man."

Pirgheibi grew up on the North Shore and can relate to many of the kids that he deals with. He recalls using the Cap Services more than 10 years ago when he broke his ankle at a local skate park.

"My friends told me there was a youth centre nearby and that I should go talk to a youth worker," he said. "So I sort of just stumbled in there and the youth worker took me to the hospital and talked to my parents."

"I wanted to volunteer and give back to the community," Pirgheibi said. "I accidentally stumbled upon Capilano Youth Services Society. I came in for an interview and I got the job. . . . I didn't know too much about youth work but the person who trained me was a youth worker for 15 years and he gave me a lot of great information."

It turned out that the youth worker who trained Pirgheibi was the same one who helped him years earlier.

"I remember the face of the person that I talked too was actually the same person who ended up training me 15 years later," Pirgheibi said. "I don't think he recognized me and I never mentioned it too him."

Capilano Youth Services Society is located at 600 West Queens Rd. in North Vancouver. It receives funding from private donors as well as Vancouver Costal Health, all three North Shore municipal governments and the provincial government. Visit its website at www.capservices.ca.