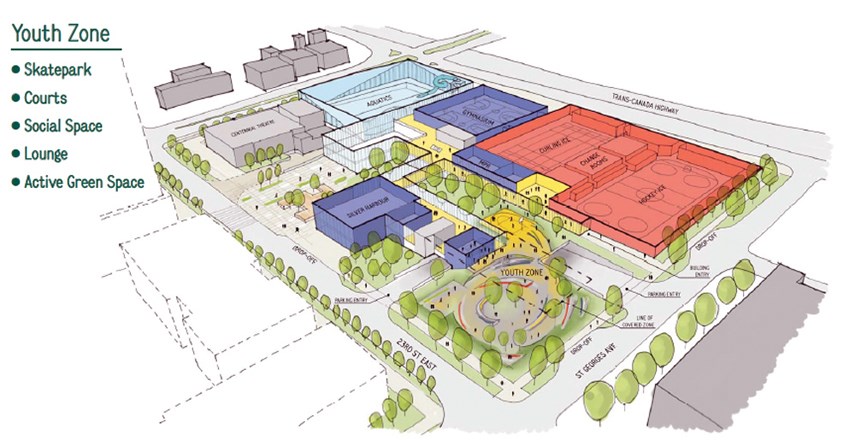 The pool may be too long and the debt too deep for a few councillors, but plans for the new, $210-million Harry Jerome rec centre project inched forward Monday.

“The financial risk alone could bankrupt this city,” she said.

Rather than selling land to pay for the project, the city is planning to lease land on the south side of 23rd Street to Darwin development company, who recently released plans to build 840 units spread between two towers and four midrise apartment buildings on the site.

The tallest tower would be 32 storeys, or approximately 298 feet, with the shorter tower edging into the skyline at 26 storeys and 243 feet. However, the 32-storey proposal crashed into a glass ceiling Monday as a majority of council opposed the height, leaving the matter unresolved.

Coun. Don Bell praised Darwin’s proposal for creating a balanced and walkable community within four blocks of a pharmacy and a grocery store.

The development also includes 21,400 square feet of retail and more than 800 parking spots.

It’s too dense, Buchanan said, noting: “Nobody in our community is saying, ‘Please build 32-storey towers.’”

The type of housing is not ideal, she said.

“My grandchildren and my children won’t live here because they can’t afford it. Why would we be building a large pool for, I think, a bunch of children who are not going to be here anymore?”

It behooves the city to move quickly, Clark contended, especially considering the state of the current Harry Jerome rec centre.

“The old girl’s falling down,” he said.

Citing council’s recent rejection of a six-storey development at 2601 Lonsdale Ave., Keating questioned why council would support a massive development only a few blocks away.

While referring to himself as “pro density,” Keating said he would not support that much density at that location.

The density is appropriate even if the height isn’t, argued Coun. Holly Back.

Back called on council to replace the dilapidated rec centre.

Back supported both the 50-metre pool and the six curling sheets.

“I know curling died out, but I honestly do believe it’s coming back,” she said, explaining the ice could be converted into a hockey rink if demand from curlers falters.

While it may be the biggest project, “probably in the history of the city,” council needs to provide the recreation that will “support that growing community” over the next 60 to 70 years, she said.

While the rec centre is slated to cost $172 million, moving the lawn bowling club to a new green by Mickey McDougall, adding a new park to offset the loss of Norseman Field and replacing the skate park will bring the total cost to roughly $210 million, according to city staff.

Assuming the city arranges for a $90-million loan and borrows $25 million from its reserves, there could be a “significant shortfall” in 2020, according to a staff report.

The city would be reimbursed in 2021 and 2022 with money from Darwin’s lease.

There are many factors beyond the city’s control, Mussatto noted, referencing recessions, free trade deals, and the looming U.S. election.

“It’s not Darwin that I worry about. It’s the market,” he said.

Clark defended the decision to lease the land to Darwin.

“There is some risk if Darwin goes broke, if the market changes . . . but the prize at the end (of the lease term) is that we get all that land back,” he said, adding that future councils will say: “Those guys knew what they were doing.”

The lease period is slated to be 99 years.

Clark called on city staff to negotiate with the District of North Vancouver on sharing operating costs on the new rec centre.

While council was unanimous in supporting Clark’s motion, Mussatto expressed uncertainty about the district chipping in on the pool and curling rink, which are expected to cost $1.2 million annually.

“It would be pretty crazy for us to go forward with this discussion if the district wasn’t going to pay at least a share of this,” he said.

The city and district generally share in the operating costs of rec centres across the two North Vancouvers based on estimated usage statistics. However, the district previously rejected the notion of sharing the cost of a 50-metre pool.

Darwin’s development includes one hectare of park connecting Crickmay with Rodger Burnes Green, a 37-space child-care centre and 80 non-profit housing units. Those additions have a value of approximately $27 million – money that would be dropped from the lease price.