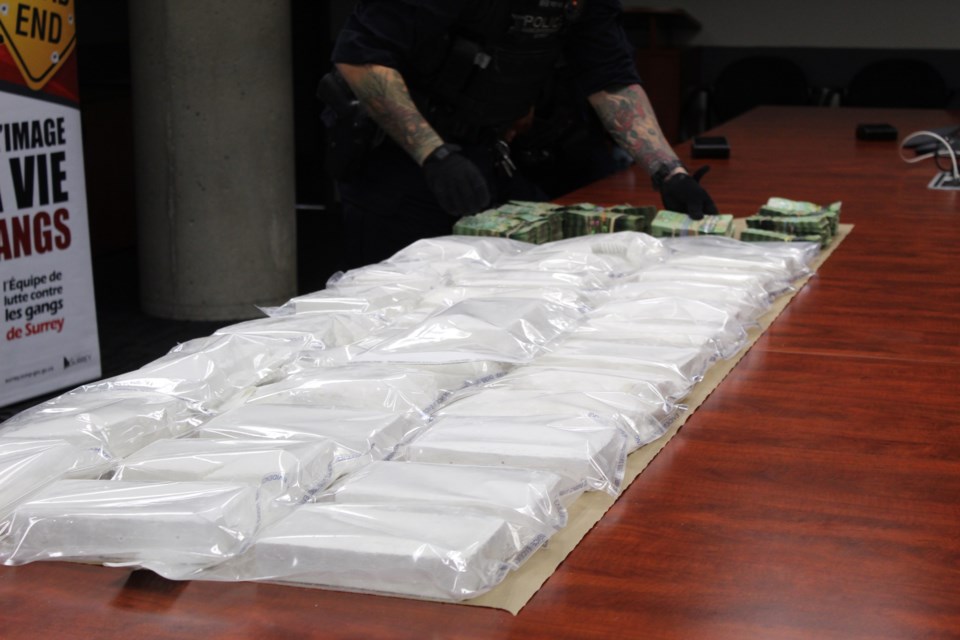 Surrey RCMP anti-gang officers seized 30 kilograms of pure, uncut cocaine from a vehicle during a traffic stop Nov. 22, according to a news release issued Friday.

If that amount of cocaine were diluted by only one half, and sold by the gram, it could be worth close to $5 million on the street.

Police are investigating whether there are potential links between this seizure and two other recent traffic stop seizures this month, one of which resulted in the confiscation of $125,000 cash.

In total, six men were arrested in connection with drug trafficking and all have been released from custody pending the outcome of the investigations and potential criminal charges.

The Surrey RCMP Gang Enforcement Team (SGET) made all three seizures following “targeted enforcement” of the Newton and City Centre areas of Surrey, according to the police statement.

Police found the motherload of cocaine during a traffic stop in the 11900-block of 80 Avenue in the Strawberry Hills neighbourhood of Newton. It’s not disclosed why the vehicle was stopped, but “officers observed a suspicious bag in the vehicle” and “subsequent investigation of that bag revealed 30 individually wrapped packages of suspected cocaine.” Officers also seized $5,000 in cash and a $25,000 money order.

Two weeks prior police made two other significant arrests.

Anti-gang officers pulled over a vehicle on Nov. 9 in the area of 140 Street and 108 Avenue (nearby Gateway SkyTrain station) after it was seen crossing over a solid line at the shoulder of the road, according to the release.

“The driver was found to have an expired BC Drivers Licence and upon further investigation of the vehicle and its occupants, items consistent with drug trafficking, including multiple cellphones, a quantity of MDMA and currency were found. A search of the vehicle revealed a cardboard box containing multiple bundles of cash wrapped in elastic bands, later counted to be in excess of $125,000,” police noted.

And on Nov. 8, police stopped a vehicle in the area of 152 Street and 81 Avenue and “while conducting an investigation under the Motor Vehicle Act” officers found 392 grams of cocaine in hidden compartments within the vehicle.

Police said all three investigations are ongoing with the assistance of the Surrey RCMP Drug Unit.

Police confirmed to Glacier Media the purity of the product; however, they would not estimate the street value of the drugs.

The 2019 Global Drug Survey, an independent research company based in London, puts the average price of cocaine in Canada at about $82 per gram, based on prices reported by those who were surveyed. It’s understood typical, cut cocaine in Vancouver sells for about $80 per gram.

Should 30 kilograms of pure cocaine sell on the street by the gram, at $80 per gram, it would fetch $2.4 million. A more likely situation would see the cocaine cut in half, or even more, for street sales. Cut in half the seized product, sold by the gram, would have fetched about $4.8 million.

Canada has a particular penchant for cocaine, ranking second to Scotland for days used in the last 12 months per person surveyed by the Global Drug Survey.

Despite the consumer demand, “drug trafficking is a significant driver of violent criminal activity, not only in Surrey, but across the Lower Mainland,” said Insp. Mike Hall with the Surrey RCMP Pro-active Enforcement Officer. “These three interdictions will have a significant impact on the flow of cocaine at the street level, and represent a significant financial hit to the network of drug traffickers these seizures are associated to,” said Hall via the release.

“Disrupting gang activity and criminal networks to protect our community from violent crime remains the number one priority,” added police. “In 2019, SGET has self-generated nearly 2000 investigations year to date, sending a clear message to gangs and criminal networks in the city, that they are not welcome in Surrey.”