Personal memories serve as source material as drama unfolds at Heart of the City Festival
Oct 25, 2013 12:00 AM By: Christine Lyon 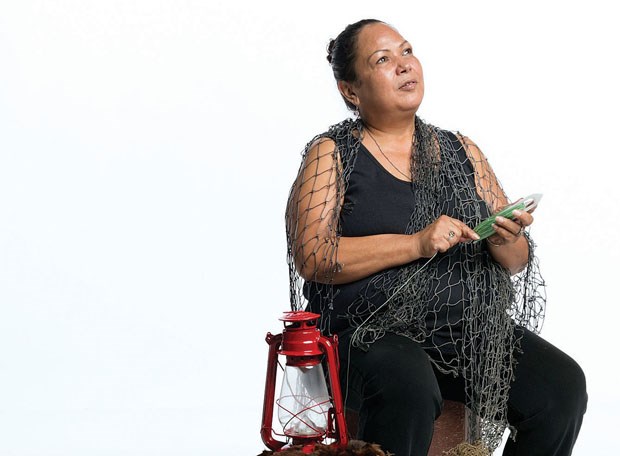 Rosemary Georgeson performs in Women in Fish at the Heart of the City Festival.Supplied, David Cooper

Rosemary Georgeson was five years old when the Loretta B fishing packer sank off the coast of Galiano Island.

It was Sept. 7, 1962 - a night she will never forget. As a violent storm raged outside, Georgeson, her mother and her siblings all gathered around the radio in their Galiano kitchen. Back then, if you turned the dial all the way to the left, you could hear the boat calls.

Georgeson was hoping to hear word from her father who, as it turned out, was safely waiting out the storm on his fishing boat at the mouth of the Fraser River. But another vessel, the Loretta B, got caught in the eye and keeled under a westerly blow. Five men died, but the lone woman on board, Eileen Lorenz, survived. It was the eve of her 18th birthday.

"She floated for six hours out there strapped to an old fish box. She was eight months pregnant," Georgeson says, noting that Lorenz's husband and brother were among those lost at sea.

"It changed our community, of course. We were a small, very tight-knit community and it was a huge tragedy, a huge loss."

Today, Georgeson, a 56-year-old Coast Salish/Dene artist (who attended the former North Vancouver High School), is committed to telling the story of the Loretta B. Her and Lorenz's personal memories served as source material for Marie Clements to write Women In Fish. Originally performed as a play on Galiano, the story was turned into a CBC radio documentary in 2005 and has evolved over the years into a multi-media presentation. Produced by Urban Ink, the show will be remounted twice on Oct. 27 at Carnegie Community Centre as part of the 10th annual Heart of the City Festival.

Women in Fish tells the tale of that fateful night in 1962, shares personal histories and memories of women who lived and worked in the West Coast fishing industry, and reflects on the demise of the once prosperous livelihood.

This two-performer production features Georgeson as the Cloudreader and Mary Galloway as the Young Cloudreader.

"Time has gone by, I'm in the spirit world now, I'm watching my granddaughter remember the stories that I shared with her. She's remembering the story of that night and I'm there on stage with her and I'm still reliving that long, dark night, that memory, the loss of all those people," Georgeson says.

Meanwhile, historical and artistic images are projected onto the stage to support the storytelling.

For Georgeson, Women in Fish is a medium to shine a spotlight on an unknown piece of history and emphasize the important role women played in the once-thriving fishing industry.

"We have so many untold stories as women, as First Nations women. We have untold West Coast stories, and this is one of them, in all of those categories."

The audience response has been profound, she says.

"At the end of this show I've had men come up to me with tears in their eyes and say, 'We never knew.'" Georgeson, like many of her peers, was born into the fishing industry. She worked as a commercial fisher herself, but quit 27 years ago after her boat was caught in a windstorm. It was a terrifying incident for a single parent with two daughters.

"I kind of had to make a choice between being here for my daughters or possibly not coming back from the next storm," she says.

Now a resident of North Delta, Georgeson reminisces on the days when the children of fishing families practically grew up on the water.

"My generation, we're the last of that generation that lived that way," she says. "And in my 56 years here on Mother Earth, I've seen it all change, and I'm not the only one." Women In Fish is a natural fit for the Heart of the City Festival, says Terry Hunter, executive director of Vancouver Moving Theatre, which produces the annual celebration of arts and culture on Vancouver's Downtown Eastside.

"The central mandate of the festival is to promote the arts and culture and the history and the heritage of our community," Hunter says. "The fishing industry is a major component of our history so this is a way that we can raise awareness."

Hunter has been a fan of Women in Fish since he first heard it broadcast on CBC.

"I listened to it on the radio, and oh my gosh, I was moved to tears by it. It was so powerful."

The performance is just one of 110 events taking place at 40 locations across the Downtown Eastside over 12 days. The majority of those events are free, making them accessible to the community's large lowincome population. Looking back over the last decade, Hunter says Heart of the City has been successful in its goal of promoting local arts and culture. Members of the community regularly tell him how much they enjoy and look forward to the celebration year after year.

"That kind of thing, it's hard to quantify, but on a personal anecdotal level in terms of what I've seen, people really value the festival."