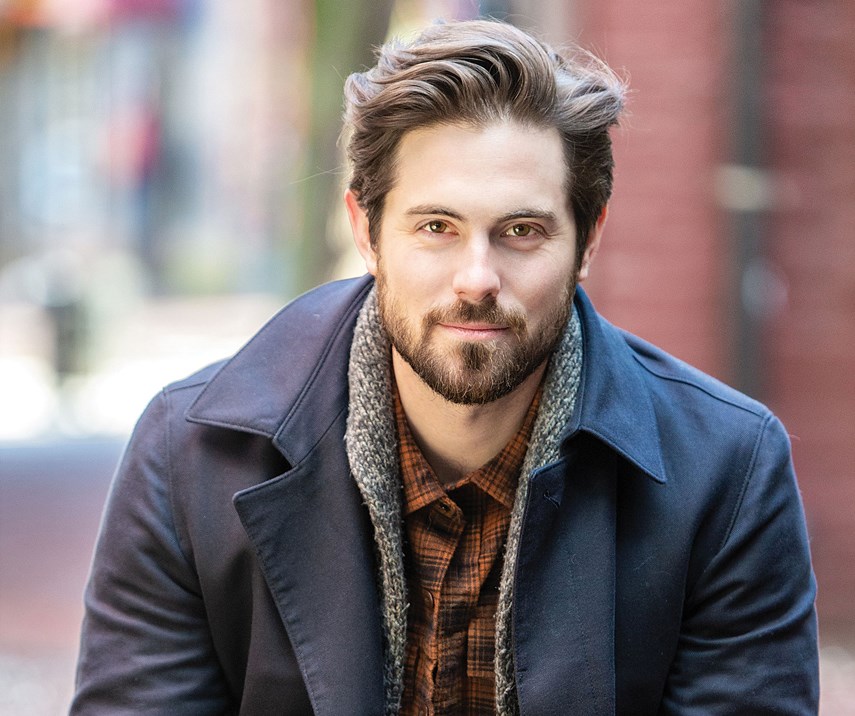 Actor Chris McNally grew up in North Vancouver and graduated from Argyle Secondary. He’s currently starring in Hallmark Channel’s When Calls the Heart and in the upcoming Lifetime TV movie, Heaven, based on the V.C. Andrews book.Supplied, Josh Neufeld Photography

The newly minted star of Hallmark Channel’s shot-in-Vancouver series When Calls The Heart is back home in L.A. while season six of the show takes a “creative hiatus.” The show stalled after the network’s firing of matriarch and executive producer Lori Loughlin over the college admissions scandal.

“I don’t know anything, I know as much as you,” McNally admits. “I’m totally in the dark about this.” An email response from the Crown Media Publicity department directs press to the producers’ Facebook post, which promises that after some “retooling” the show will go on. Fans of the show, “Hearties,” have lit up the internet with messages of support and pleas for a speedy resolution.

Those Hearties are a loyal bunch: there are websites and Facebook groups sharing everything from show news to recipes and bible verses. There are viewing parties (HeartiesParties) and an annual “family reunion” convention held each year in Vancouver, complete with star appearances and a tour of the Langley film set. Hashtags galore on Twitter (#Hearties #WCTH #WhenCallsTheHeart #HopeValley) keep the lively community connected.

“They’ve been super welcoming,” McNally says of the show’s fans. He notes that people were a little trepidatious after actor Daniel Lissing left, resulting in fan-favourite Jack Thornton being killed off the show, so he and fellow newcomer Kevin McGarry were nervous about joining the cast of the network’s anchor series. “Other than one person who tweeted ‘if this is the guy, I’m going to cry’ or something like that, it’s been very positive,” he laughs.

The March 1 season six premiere of When Calls The Heart was the most-watched premiere in the season’s history, and was cable’s number-two scripted episode that week (trailing only behind The Walking Dead: how’s that for contrast?). McNally plays Lucas Bouchard, the new saloon owner in Hope Valley and something of a man of mystery. “It’s the most fun character I’ve had the opportunity to play, I’m really happy I was cast in the part.”

Lucas engages in sleight of hand with coins and cards, and speaks French, adding to that murky-past mystique. McNally needed some coaching with the coin tricks but the French came more naturally: he took French immersion for years in school. “It’s crazy, they didn’t even know I spoke French,” he says. “It was fun to use it after all these years.”

Born in Ontario, McNally grew up in North Vancouver and graduated from Argyle Secondary. He gave soccer, gymnastics, mountain biking, and martial arts a try but “looking back I was pretty mediocre at all of them.” Instead he took advantage of his high school’s “great” music program and also played alto sax in a jazz band outside of school. “I don’t remember our name. We played at various functions, played for the teachers. Pretty cool,” he says.

His parents enrolled him in the business program at Capilano University, which “lasted one semester,” he jokes. He found that his true path was acting and started studying at private studios before landing steady work on TV movies and series.

Hallmark Channel devotees will remember McNally from the Winterfest movie A Winter Princess, in which the actor co-starred with fellow North Shore native Natalie Hall. “West Van and Deep Cove: we grew up 10 or 15 minutes from each other and didn’t realize it,” he says.  McNally picked up another new skill while filming: dancing the Viennese Waltz. Sort of. “I’m so bad at it! Even watching it, it’s kind of painful,” he laughs. On the plus side, after shooting wrapped McNally tried out his new moves on his girlfriend. “I waltzed her around the living room… but she’s south American so now she wants me to learn to Salsa.“

His next project is about as far away from Hope Valley as the actor can get. Heaven is a Lifetime movie based on the wildly popular V.C. Andrews Casteel series, in which dirt-poor Heaven Casteel is sold off to a childless couple, Kitty (Julie Benz) and Cal (McNally). Cal is an author with serious writer’s block; Kitty, the breadwinner, is older than her husband given to unpredictable mood swings. Virtual prisoners in the house, it isn’t long before stepfather and daughter turn to each other for solace.

What will the Hearties say? “It’s the opposite end of the spectrum, for sure,” McNally says. “It’s a racy story about sleeping with the wrong people and the consequences of those actions … Heaven re-inspires him, his intuitions about her unlocks his creativity and he begins writing again.”

V.C. Andrews books were the forbidden fruit of the 1980s, a fact that McNally learned during a recent health exam. “The doctor found out I was in the movie and she said ‘I used to read those and I wasn’t allowed to’ so she would cut a cover off another book and stick it on and read it,” McNally says. Andrews’ books have sold over 106 million copies and been translated into 25 languages; new cover art featuring the actors is planned for the novel’s re-release. “It definitely adds pressure when you’re working off a novel,” he says. “I just hope fans enjoy it.”

He’s terrible with social media. “I try, but I just don’t think it’s inherently in me. It stresses me out: I sit there and I realize that I’ve been thinking for 45 about what to write.” He finds himself replying to things that are five or six days old, he says, before adding – in typical Canadian fashion – “I don’t want to come off as rude.”

At home in Los Angeles McNally is busy raising two eight-month-old puppies. “They were abandoned in a cardboard box in an airport,” he says of the husky-pit bull mixes. “We were supposed to only get one but I couldn’t let go of the girl pup and we walked away with two – we’re in way over our heads.”

McNally loves to go camping and hiking: he’s in the middle of building an off-the-grid vehicle designed to sustain him for days camping in the backwoods. There’s a big overland community in L.A., he says. “I love it. It’s a nice reset to get out in the middle of nowhere.”

A man going back to basics, forging his own path through the wilderness  – even if it is minutes from the City of Angels. Now that’s something McNally’s Hearties can appreciate.