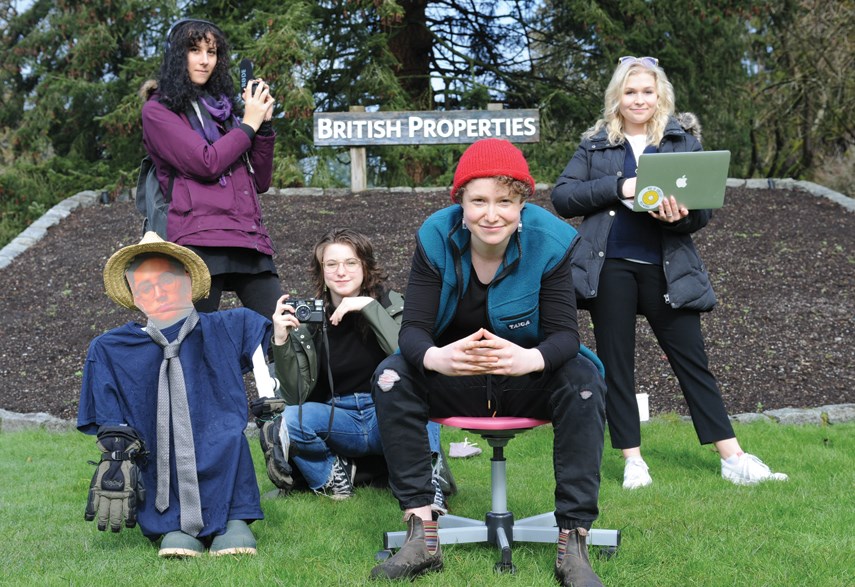 West Vancouver activist and filmmaker Emily Kelsall is flanked by film crew Lexi Fontaine, Kenna Clifford, Bella Hallam and a carboard cutout of Illhan Saferali, who are preparing to make a documentary on the history of the British Properties. Mike Wakefield, North Shore News
Even as a child, Emily Kelsall had a visceral response to seeing trees felled. The Collingwood School graduate grew up playing in West Vancouver’s creeks, watching as wooded areas were cleared to make room for ever bigger homes in the British Properties.

“The forest is so dense and rich and full of life. And sometimes when I look at the trees, I really feel like they’re just like watching and being present to this whole shebang that’s taking place,” she said.

The 23-year-old activist was studying film writing and editing at Concordia University in Montreal when COVID-19 struck and she opted to wait out the pandemic at home in Eagle Harbour. While on her impromptu gap year, she sought to complete a project she’d been thinking about since she was 13 – a documentary about West Vancouver’s loftiest neighbourhood.

In 1931, West Vancouver residents voted 1,329 to 26 in favour of selling almost 4,000 acres of municipal mountainside property to British Pacific Properties, a group of investors led by the Guinness family. Today, everything is bigger in the Properties and Kelsall has some big questions, looking to reconcile the past with future plans for the area.

“I feel like this is a story that I need to tell and I’m not going to be able to leave this community and move somewhere else until I’ve told it,” she said. “The British Properties is like the representation of a capitalistic machine of the colonialism of wealth that has been going on for hundreds of years.”

That may come across as heresy in the some parts of her hometown, but Kelsall said she doesn’t mind being a pariah if it means she’s made people reflect. Far from being dour or preachy, Kelsall said the finished product will deliver a good dose of humour and cheek, she added. “If that gets people’s attention, that’s fine with me. I can’t afford to live there anyway,” she added with a laugh.

And Kelsall is clear she’s not out to villainize anyone, including the folks who live there and/or develop there.  “We are all living in the effects of our predecessors,” she said. “I think by making this documentary, where we’re examining our past, we’re examining why we are the way we are today, and maybe a way we can move forward in the future, where we can set an example and change the narrative a little bit, not just for West Vancouver, but all around the world.”

Kelsall has hired a crew of young filmmakers and a musician to help put the documentary together. To fund the project, she sought financial backers on Kickstarter. A little over a week into her campaign, she shored up her $7,000 (minimum) budget – about half of which came from a developer who has built a number of monster homes on the slopes of Hollyburn Mountain. Any further contributions that come in over and above that will result in a more polished film, she said.  After it is completed, ideally by the end of 2021, Kelsall is planning to screen the doc locally but also make it available online and show it at film festivals.

British Pacific Properties did not respond to a request for comment.