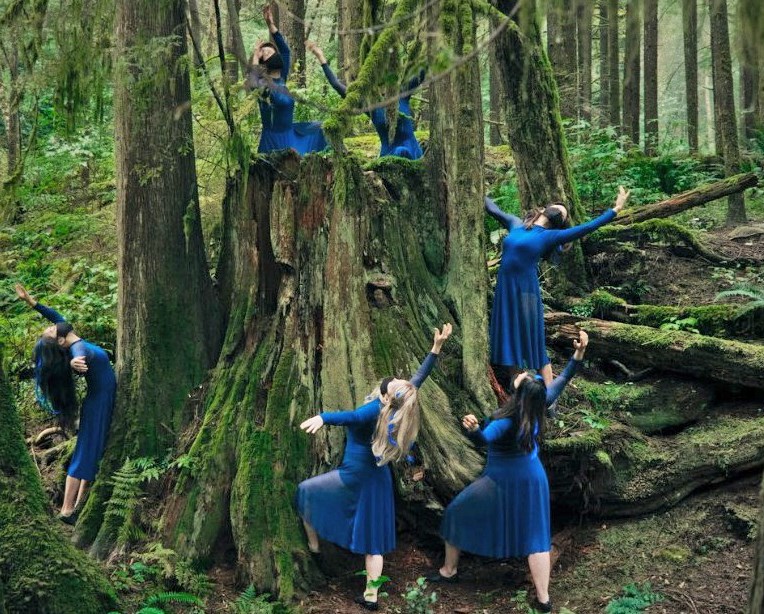 A scene from "Mad World," a short dance film made on the North Shore. OneDance Productions

A group of North Shore dancers have taken to the woods in order to escape the madness of the world.

Around half a dozen adult dance students from OneDance Creative Art Centre in West Vancouver have put together a new short film called “Mad World,” alongside a small production crew.

The four-minute movie was filmed in late September on a trail in Lynn Headwaters Regional Park, according to Susan Heimsoth, artistic director at OneDance.

Officially released last month, the film shows a group of dancers, decked out in face masks and aqua-blue costumes, as they move, flow and connect with the natural world around them while enjoying the splendour of the Varley Trail.

The film and dance routine are meant to evoke the disconnect we may feel between necessary COVID-19 protocols – wearing face masks, maintaining physical distance – and the call of nature and, ultimately, connecting with the world around us as well as each other, according to Heimsoth.

“To us, it is a mad world that we are living in,” said Heimsoth.

“Mad World” also features a piano-laden performance of the Tears for Fears song of the same name which soundtracks the visual dance routine.

“Our projects help to give our lives meaning. We are a collective who make short films that reflect the world we live in. Our group collaborates together to tell a story,” said Heimsoth.

Watch “Mad World,” a film by Susan Heimsoth and OneDance Productions, by clicking on their Vimeo page.

Goh Ballet’s The Nutcracker is pivoting to the small screen this holiday season
Dec 10, 2020 8:00 AM