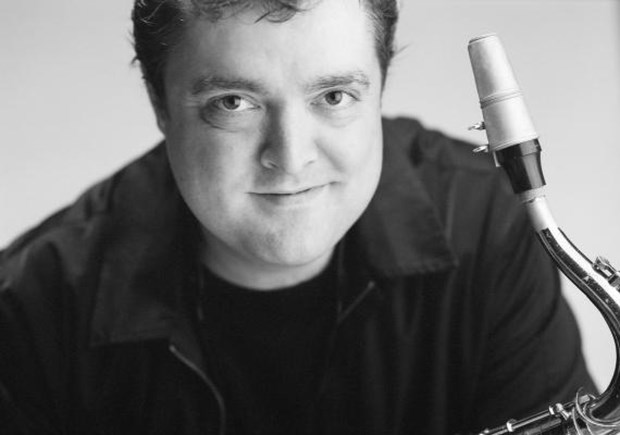 The music of longtime Capilano University faculty member Ross Taggart (1967-2013) is remembered in a new album by the Jill Townsend Big Band.Supplied

Jill Townsend Big Band CD release of Legacy: The Music of Ross Taggart, presented as part of the Vancouver International Jazz Festival June 30, 7 p.m. and 9 p.m. at Pyatt Hall at the VSOTickets from $25. More info: coastaljazz.ca/jill_townsend_big_band.

Late, great jazz virtuoso and composer Ross Taggart's final coda has yet to be played.

The internationally renowned musician and Capilano University jazz instructor tragically passed away from renal cancer at age 45 in 2013 - but Taggart's legacy will live on, in part through a special musical tribute being arranged by his friends in the tightknit Vancouver jazz community. Arranging being the operative word.

Taggart contributed his unparalleled piano and saxophone talents to a number of local jazz ensembles including the celebrated Jill Townsend Big Band. So, to pay tribute to their friend in music and life, Townsend and Co. took a carefully curated selection of works Taggart composed - most of them designed for a quartet - and rearranged them for a big band.

Legacy: the music of Ross Taggart will be unveiled by Jill Townsend Big Band at a CD release show Tuesday at Pyatt Hall, as part of the Vancouver International Jazz festival. The performance will feature six Cap U jazz program instructors - Bill Coon, Dave Robbins, Dennis Esson, Brad Turner, Steve Kaldestad and Chad Makela, as well one alumnus, Cory Weeds - who round out the big band.

For Weeds, the mastermind behind the Taggart tribute, it's been an emotional journey - from finding an outlet to mourn his mentor to working extra hard to elevate the music to Taggart's level.A precocious pianist, Taggart was already well known on the Canadian jazz scene at the tender age of 21 in the early '90s. As fate would have it, a teenaged Weeds - who would later contribute greatly to Vancouver's jazz history - wound up being billeted with Taggart at a music camp in Kelowna.

"I had known about Ross. But for me. .. he was one of the most famous guys in the world to me. I mean, he was my hero," recalls Weeds, in between rehearsals for the big tribute show next week.

After that initial meeting, Taggart and Weeds went on to achieve tandem success in the jazz world. They became friends who often collaborated together.

Weeds credits Taggart, who had an insatiable appetite for the music, for introducing him to some of the jazz greats. When asked what invaluable lesson Taggart taught him, Weeds pauses and then offers, "Sometimes, hanging out with your mentor is less about what they show you and more about watching them."

When Weeds opened the famous Cellar Jazz Club in Vancouver, Taggart soon became a fixture behind the piano, accompanying a revolving door of world-class jazz artists. After Taggart passed away, Weeds, struggling to fill a huge void that his friend left behind, conceived the idea for a tribute album.

"I came to the concept because I wasn't satisfied with how I was mourning the loss of my friend. And I wasn't sure why, because I was as close to Ross as anybody. This was my mourning process," says Weeds.

Legacy: the music of Ross Taggart was perfected during a months-long gestation period, from the rehearsals right through to the recording with The Jill Townsend Big Band, and now that it's ready for public consumption Weeds has a chance to reflect on the emotional process.It started when three boxes containing Taggart's compositions arrived from his ex-wife, fellow jazz pianist Sharon Minemoto, who

Taggart had continued to collaborate professionally with until he passed away.

Receiving Taggart's inventive works on that first day of the project were his longtime friends and collaborators including fellow Cap U jazz instructor Coon, who is also Townsend's husband. As he thumbed through the compositions, the past couple jazz-filled decades of Coon's life jumped out at him: these were treasured songs he had heard Taggart play or ones they had played together.

"I think, emotionally, it was quite difficult to start the project. Opening these boxes. .. it felt touching a raw nerve," says Coon. "We basically tried to take our favourite Ross Taggart tunes and arrange them."

It was Taggart's "Light at the end of the Tunnel" that struck a chord with Coon.

"We (Taggart and Coon) performed this together maybe twice, and there's something about the tune that was very poignant because Ross had gone through some health issues and he felt that he was in a better place - and then he died," explains Coon. "When he wrote it he thought life in general was giving him a break. It's not a dance song. You can feel the hope and you can feel the pain in the song."

Weeds agrees with that assessment of "Light at the end of the Tunnel," saying he cries whenever he listens to the song. As for the project as a whole, Weeds is more than pleased with how the tribute album turned out, and says Taggart would be proud of it. "I thought it was a very classy and tactful way to honour him and his legacy and to involve a lot of his friends and to feature his music.. .. ," says Weeds. "If Ross was alive, it was probably something that would have never been done. Ross changed my life and I want his legacy to live on for future generations."

Coon echoes Weeds's sentiments, saying the over $23,000 in donations that rolled in from a Kickstarter campaign for the project is indicative of the love the local jazz community had for Taggart.

"This project became bigger than life in a way - and I think that's what is going to make next Tuesday so special," explains Coon.

Taggart will be remembered for more than just his eclectic jazz style that spanned bebop to the blues. He was also a natural comedian and practical jokester.

"He had a hundred (jokes) at his fingertips," recalls Coon. "The jokes were more for hanging around with musicians. He was more formal during his shows. So that side of him didn't come off so much."Undeniable was Taggart's innate talent: "He was a virtuoso at both instruments," says Coon. "He just had this gorgeous warm sound (on the saxophone) that to this day I have never heard anyone make that sound."Audiences across North America, Latin America and Europe were treated to Taggart's incomparable sound. The humble musician, meanwhile, spent two years studying in New York City with saxophone legends George Coleman, Clifford Jordan and J.R. Monterose.

Taggart was also a teacher, the kind that leaves an indelible mark on your life, according to Coon.

"What you would hear secondhand from his students was how valuable the lessons were," said Coon, recalling his colleague in the esteemed jazz studies program at Cap University.

With the overlap between their day jobs and evening gigs Coon got to know Taggart quite well. For the last years of life Taggart lived in a studio basement suite below the Townsends,

amongst his enviable record collection which included just about every Duke Ellington album.

Coon also struggled in the months after Taggart's death, channelling his grief into compositions inspired by his friend. He spent about a week and a half in Comox holed up in a studio apartment with a piano.

"He (Ross) has inspired other music. .. in a larger sense his life inspires me, the way he interacted with people, the intensity that he played with - those are the things that I am going to remember about him," says Coon.

As for what the audience can expect at the Taggart tribute concert, Coon said it will be a bit of an eye opener because many people knew what a great piano and saxophone player he was, but Ross the composer will be centre stage this time.

"I really feel like the (Jill Townsend) band is really going to outdo themselves (in honour of Ross)," says