Michael Nicoll Yahgulanaas is selling prints of one of his works that was to be shown in Kyiv later this year. All money raised will be donated to help victims of the Russian invasion.

After years of talk and preparation, Michael Nicoll Yahgulanaas was getting ready to show his work at TSEKH Art Gallery in Kyiv, Ukraine, this coming fall. Then, on Thursday, Feb. 24, Russia invaded the sovereign state, throwing Yahgulanaas’ exhibition in doubt.

The Haida artist, whose studio is in North Vancouver and whose work is displayed across the world in the British Museum in London, the Metropolitan Museum of Art in New York, and other public and private collections, was compelled to do something – he launched a fundraising project to help victims of the Russian invasion.

“The driving force to do this was the emotional connection to these people; the realization that the struggle they [are] involved in was the struggle of Indigenous peoples in Canada, and really, it's the struggles of pastoralists people.”

With the help of Malaspina Printers and Dr. Launette Reib, Yahgulanaas is selling prints of one of the works that was supposed to be shown in Kyiv, with all money raised being donated to set up a UNICEF Blue Dot refuge and Médecins Sans Frontières (Doctors without Borders). There are only 224 limited edition prints available – symbolizing the date in which the invasion begun. 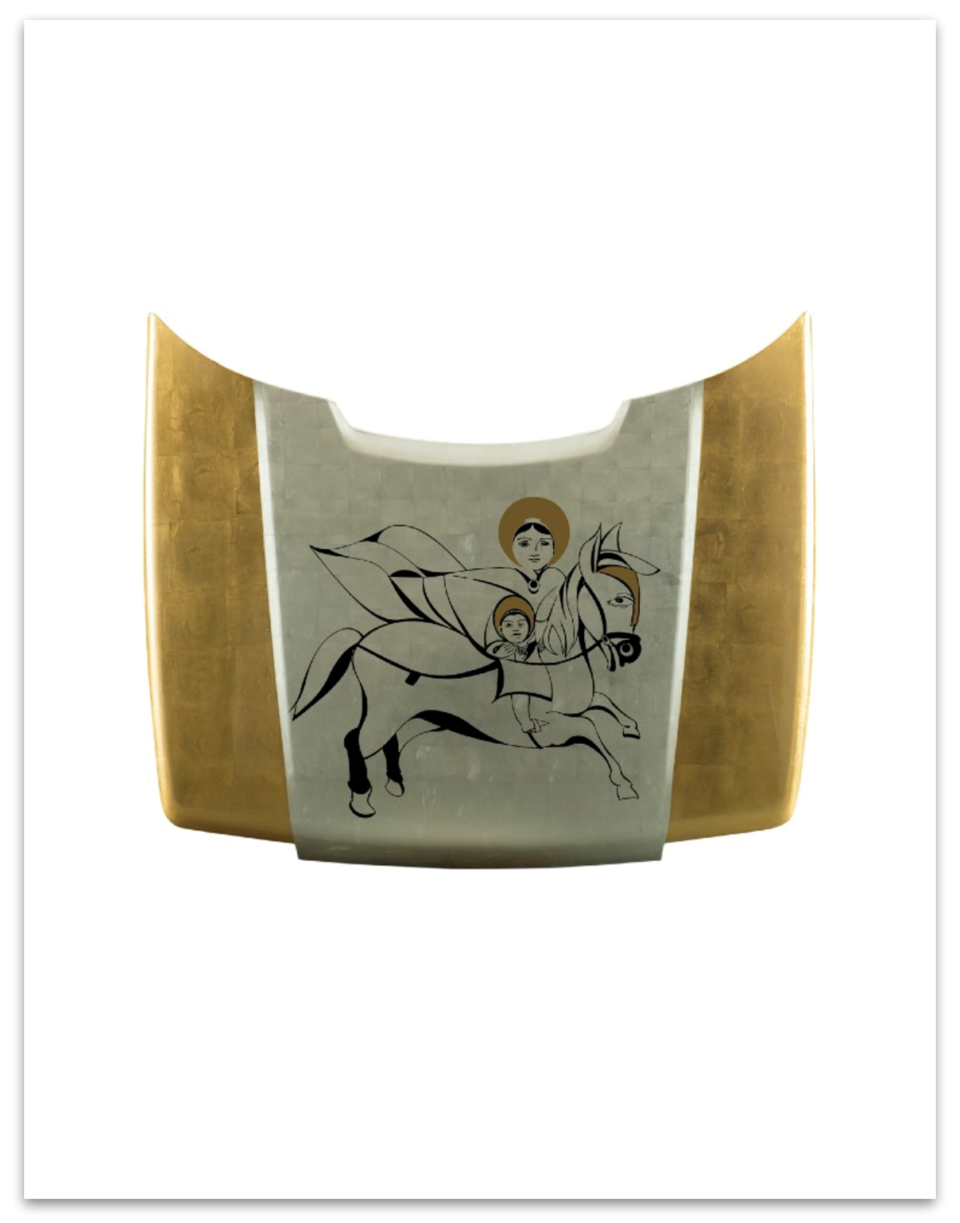 Replacing the warrior with a mother and child, Yahgulanaas told the North Shore News that when talking to the art gallery in 2019 about the proposed work, “that image just stuck in my mind. … But can we lose the weapon? And I thought [it was] much better to have a mother and a child on the horse, and so there they are riding across this gilded plain.”

“And this was all done before the Putin invasion of late. So then when … we all [saw the] images of women and children fleeing war, which is, it's tearful, it's just wrong, it seemed very much to be apropos to the hood and the situation,” Yahgulanaas explained.

While in Kyiv, after comedian-turned politician Volodymyr Zelenskyy was elected as president, Yahgulanaas said the energy in the community was palpable.

“It is not dissimilar to the energy that I'd experienced in Haida Gwaii [during] the blockades in 1985,” he explained. “It was the sense of hard won … relative to what's going on in Ukraine is perhaps insignificant, but given the 1862 smallpox epidemic, and given the persistent Canadian attack on all elements of Indigenous identity, I can't think of any part of how we describe ourselves that hasn't been assaulted somehow, that's 150 years of fighting of war. But after the 1985 blockades and the establishment of the Haida heritage, like Gwaii Haanas, there was that same confidence. So it felt really like a sense of kinship,” he said.

The blockades on Haida Gwaii saw 72 people arrested over two weeks in November, as protesters sought to stop Western Forest Products from logging Athlii Gwaii. Gwaii Haanas National Park was later recognized in 1987 and now covers 1,470 square kms, including over 138 of the approximately 150 islands which make up Haida Gwaii archipelago.

While Yahgulanaas continues to work on other projects, including an eight-square-metre mural commissioned by the Humboldt Forum in Berlin, Germany, he has no plans to show Kyiv Child or other works in Ukraine until Russian forces leave the country.

“I have an aversion to autocracies. Coming from a lineage and from a community that's experienced the imposition of brutal force and nastiness, I'm just really not interested in supporting that.”

Yahgulanaas understands the hood has taken on new life – no longer a piece of art, it’s now a symbol.

“It’s developed its own forward moving energy,” he said. “The work that I'm doing is really focused on relationships between people across ethnicity and cultural cleavages, based on the premise that if people start to see that that person who is ‘other’ is actually somebody's child, and has families and is human, that our inclination will be not to do the kind of violent things that we do when we demonize the other.

“And that that comes from my own lived experience as a person of mixed ethnicities, [and] it's really important for us to figure that one out.”

More information on Yahgulanaas’ Ukrainian donation drive and Kyiv Child can be found at Malaspina Printmakers.