After years of delays thanks to the COVID-19 pandemic, the West Vancouver Youth Band and Spakwus Slolem (Eagle Song Dancers) are making history with their three-movement Sḵwx̱wú7mesh (Squamish) symphony piece premiering later this month.

Held at the Chief Joe Mathias Centre on April 26, The Gathering of Eagles is made up of songs by S7aplek Sḵwx̱wú7mesh Úxwumixw (Squamish Nation) Elder Bob Baker, which have been reimagined by composer Robert (Bob) Buckley.

Band director and conductor Doug Macauley said after premiering just the first movement (Wolf Song) in 2018, the single piece was so successful that some Elders asked for it to be done again.

“And then it made sense to turn it into a three-movement work. So, we got to play the second movement in 2019, and we would have done this concert in 2020. But, you know, things happened,” Macauley said, laughing.

While on a ministry of education committee prior to the pandemic, Macauley was looking at reimagining what music education could look like, and while well into the 21st century, he said music education still was “doing things the same as we always have.”

“One of the things that kept coming up, was the importance of the inclusion of First Nations content. But none of that exists, except in really bad, sort of Hollywood arrangements and compositions,” he explained.

"There were also some very good, serious attempts by good composers. But, they were writing what they imagined it would sound like. Whereas, [there’s a] big push for authenticity and for permission, and for everything to be done properly, because a lot of music was just taken over the years. So, I went to Bob Baker and said, ‘I have this idea, would you lend us some songs?’ and he loved the idea.”

The idea was born out of “frustration,” Macauley said, adding that Bob Buckley was the perfect composer to transmit Baker’s work to symphonic band, as he had previously worked on the 2010 Olympic Games and with First Nations writers.

“[Now] it's being played all over the world, and certainly by groups all across Canada. Very popular piece of music, and it's showing that it can be done. You can create these relationships, rather than having to have meetings committees, you just call somebody and say, ‘Hey, do you want to do a thing?’” Macauley said.

Macauley explained that this musical piece is creating a template for how collaborations like this can be done, and said it is imperative that everything is done correctly and follows protocol.

“Correctly, meaning that Bob Baker, whose songs we've been kindly allowed to use, he's listed as the composer in the publications, and he receives royalties. And Bob Buckley is listed as ‘reimagined for symphonic band’ underneath and Bob Baker is at the top. And that's how it should be. Permission was sought, granted, proper copyright was secured for Bob. So this is his music in perpetuity. Whereas it used to just be taken,” he said.

A fully shared event between the WVYB and Spakwus Slolem, the approximately 30-minute concert alternates back and forth between the two groups, like a single symphonic work, Macauley said.

“The Eagle Song group will sing Wolf Song and there'll be dances as well, and that'll just morph into the youth band. And then halfway through it, the youth band continues with the soundscape underneath while the Wolf Song comes back in. And then we finish that, and then the Eagle Song group will do Raven, which will come directly into the youth band, do a transmission of Raven, and then into The Gathering of Eagles, and it just keeps swooping back and forth,” he said.

Macauley said the arts, and music in particular, are “logical” places for the inclusion of First Nations content and culture, considering the current big push for inclusion in school curriculum. 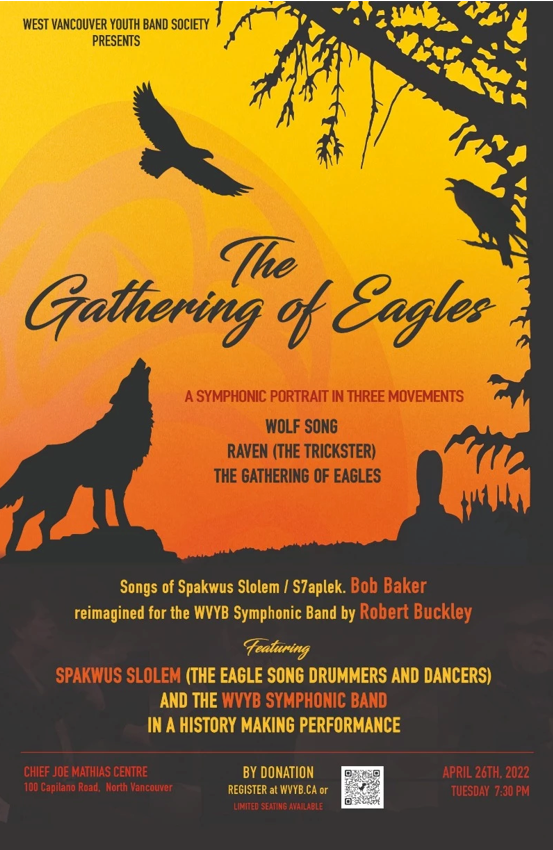 “As I told the kids in the band in 2018, ‘You always play beautifully. I'm always proud of you. But this time, you didn't just play beautifully, you made history. And you've made a difference.’

“When I was on that education committee, I got a sense of why things change, or don't, but when they do it is at a snail's pace for First Nations people,” he said. “And it's because everybody loves to talk about. … Everybody's talking about it, but what's actually getting done? … And it's been one of the great things about the youth band, is that being an independent organization, we can just go ahead and do these things.

“I'm very proud of this and very proud of the band members for how they've approached this. And the folks in Eagle Song and Bob Baker have been so incredibly kind and generous,” Macauley said. “Let's be realistic, they owe us nothing, but they're just been absolutely wonderful to work with. It's just been artists sharing this cultural link that we have, and shows that we're not so far apart.”

Registration for the event, along with further information can be found here.