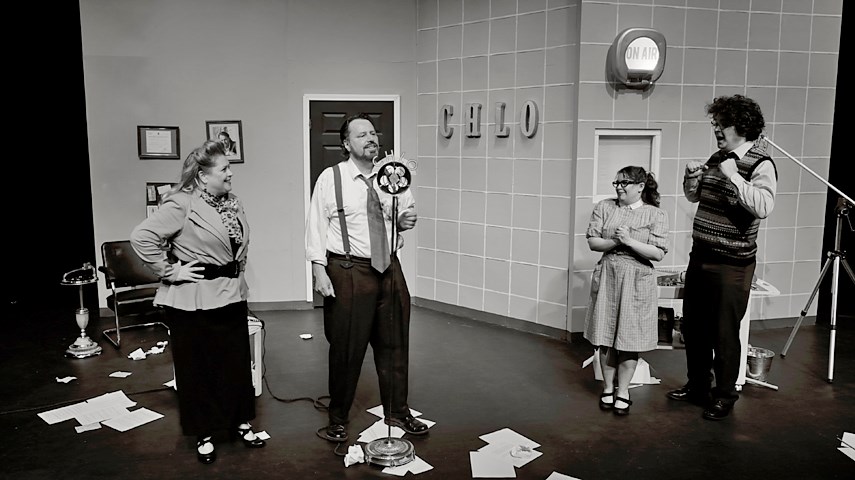 Radioland ’48, an original production written by Kirsten Van Ritzen and directed by Tracy Labrosse, will be available to watch online during a three-day run, June 5-7.

When the North Shore News spoke with the community theatre’s president last year, arts institutions across the North Shore were right at the beginning of adjusting to life without an audience and were remaining hopeful they’d be able to raise the curtains on live performances sooner rather than later.

As the pandemic entered its second and now its third waves, that certainly hasn’t been the case.

Like many arts spaces and organizations across the region, the non-profit Deep Cove Stage Society – which generally shares the space at Deep Cove Cultural Centre with First Impressions Theatre – has adapted.

The stage society has been offering audiences online play readings every month since Christmas, as well as a few similar theatrical outings including its well-known annual pantomime performance.

“The most we did was the pantos as a Zoom-based thing in December – which actually went well,” said Stanley.

All and all, things have been relatively quiet on the community theatre front this past season, he admitted.

“It’s been challenging. Since we have a much smaller theatre – typically we advertise it as 130 seats – but if you’re to include physical distancing that brings you down to 30 seats,” said Stanley, referring to the period when theatres were briefly allowed to host shows and events earlier in the pandemic. “It’s been very challenging in the sense that if you’re only bringing 30 people in, it’s hard to recoup your expenses.”

Under current provincewide COVID restrictions, in-person cultural gatherings or events, such as musicals or theatre productions, are prohibited.

In the interim, they’re hoping to get as many sets of eyes as possible viewing their upcoming online production, filmed at the theatre in gorgeous black-and-white and edited by the director.

Set in 1948, Radioland ’48 follows a quartet of employees of the fictional CHLO radio station as they desperately try to save the studio with a marathon broadcast – just as romance begins to blossoms between a pair of naïve ingénues and a couple of cynical careerists, said Stanley, adding the show pays homage to screwball romantic comedies.

Tickets are $10 in advance. The link to the recording on YouTube will then be sent to ticket holders on June 5 and will be available to watch until June 7.

“We recognize we’re competing against all the online things that people have access to, but I think it’s really just an attempt to capture what live theatre is all about. It will appeal to people who are missing live theatre.”