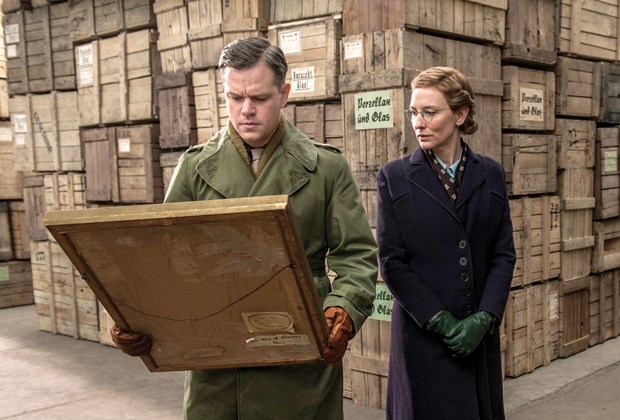 Matt Damon and Cate Blanchett are part of the excellent ensemble cast in The Monuments Men.Supplied, Sony Pictures

The Monuments Men is a buddy movie, an adventure film, and a throwback to less cynical times. But it also asks a weighty question: is art worth dying for? In the film men do the honourable thing. There's no sex. There's little blood, minimal cursing. It's a rarity in an industry relying on shock value to peddle its product.

Thieves and the Greatest Treasure Hunt in History. Most know a little about how Nazis plundered Jewish homes, then museums, in pursuit of priceless works of art; but the film tells the story in revelatory detail.

In his pitch to FDR, Frank Stokes (Clooney) offers the artsy battle cry "Who will ensure that David is still standing, the Mona Lisa is still smiling?" Stokes is given a half-hearted green light to assemble a team to find and save what he can.

The first man he approaches is restoration expert and curator James Granger (Matt Damon, Clooney's pal from the Ocean's films). If the first two men are a little grey and not quite fit for basic training, the other members of the team are hopeless.

The characters here are absorbing in their own right. Bonneville's Donald Jeffries is a former boozer seeking redemption from his father, who had to bail him out of a scandal. Pvt. Epstein (Leonidas) wasn't allowed to visit the museum in his German town to see a great work of art: his grandfather told him it was because he was "too short" but it was really because he was Jewish.

The threats to Rodins, Michaelangelos and Monets are many: the Germans are retreating, but taking everything with them for a planned-for Fuhrer Museum. The team's fellow Americans are bombing entire towns to eradicate the enemy, destroying priceless works as they go. And the Russians plan to keep whatever art they find, compensation for their 20 million soldiers and civilians lost during the war.

It's little wonder that Paris museum curator Claire Simone (Cate Blanchett) is suspicious when Granger offers to retrieve some of the art she watched champagneswilling German officers cart away.

Hitler ups the ante when he sends instructions to destroy everything in the event of his death. Like a spoiled child, if he can't have it, no one can.

"You can wipe out a generation of people," says Stokes. "But if you wipe out their achievements, it's like they never existed." A colossal five million pieces of art were recovered.

Action initially lags because the team splits up but the story finds its footing as the team focuses their treasure hunts on two masterworks that come to symbolize the men's sacrifice. Alexandre Desplat provides a peppy score.

Clooney's The Monuments Men is a treat, offering fresh material in a funny, poignant, enlightening and entertaining package.