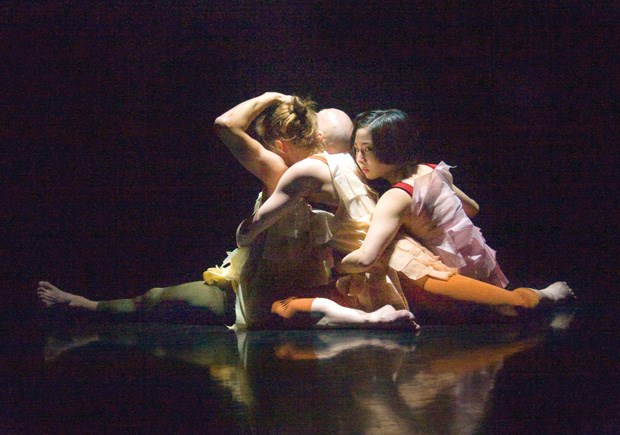 The Audio Action Tour at the Firehall follows a unique two-act format which features presentations by Peggy Baker and the dancers on the methods and inspiration behind the choreographies in act one, followed by a fully-staged performance in act two.Supplied John Lauener

When Peggy Baker watched a video of a beetle nearing the end of its life, she was captivated.

Baker, a renowned Canadian dancer and choreographer, used the film as inspiration for a three-piece contemporary dance set. In Audio Action Tour, the duet and trio will be performed at Vancouver's Firehall Arts Centre in January.

"This beetle was lying on its back, and it was basically in its death throes," Baker says. "It was going through incredible movement patterns with its many limbs and antennae, walking and curling and opening up."

Baker used the film as the basis for a solo dance called earthling.

She also started working with choreographer Doug Varone, who was using science essays about social insects from Lewis Thomas's Lives of the Cell for inspiration.

He offered her the duet armour, and she choreographed a third piece, coalesce. Thus a set of three companion pieces was born, although the solo, which was previously performed in Vancouver, will not be presented in this month's upcoming performance.

In coalesce, Baker examines how humans might feel if they were better linked to the environment around them.

"If humans were actually receiving vibrations directly into their body like insects receive different waves through their antennae, what would that feel like? How would we share and save that information?" Baker asks.

Coalesce explores that relationship, she says.

According to Baker, Varone's choreography in armour was inspired by Thomas's idea that, for social insects, "it's the being touched, not the touching that counts."

"This duet is about the innate need for absolute tactile connection," she says. "It's between a man and a woman, and it's very entangled and instinctual."

"Because it's so obvious that these are older people who are performing, this doesn't have anything to do with throes of young love," she says. "It's a far more primary human need than that."

Baker didn't start seriously dancing until she was about 19. The contemporary dance world continues to welcome her as she enters her 60s, she says.

Baker was on track to go into theatre when she took a dance class that changed everything.

"It spoke to my poetic and physical connections," she says. "I literally dropped everything I was doing and moved halfway across the country."

After intense training for several years, Baker started her own company, Peggy Baker Dance Projects in 1990, where she focused on solo performances for almost two decades.

However, in 2009 she started choreographing performances for the small ensemble that will perform coalesce.

Baker says that although she has always choreographed her own performances, it was a complex transition as she started choreographing for others.

"It's different because I'm not using my own body as the subject or my own performance skills as the vehicle," she says. "I'm creating something outside of myself."

She feels like this creative process has started a new chapter in her life.

"I've been performing in Vancouver for more than 20 years, but this is the first time the city will see my work danced by someone other than me," she says. "This is a big moment."

The score, composed by Debashis Sinha, is a unique electronic soundtrack commissioned for the work, she says. It was composed on a computer in the rehearsal hall as the performances were choreographed. "It was very collaborative," she says.

"If we think of the space that we inhabit and we put a stethoscope to the wall, we'd probably hear some clanging and buzzing," she says. "I'm trying to imagine the sounds of the space around us and what it would sound like if we could amplify it."

The show is presented in two acts. During the first act, Baker will explain her methods, influences and source material, including literary and visual art, she says.

"I'm really interested in sharing the methods and ideas behind my work with people," says Baker. "Not the meaning of the work, because that's not for me to say, but by explaining my influences and methods to the audience, I feel that they can appreciate the work on its own terms much more easily."

This kind of format is becoming more popular in the dance world, she says.

When the audience returns from intermission, they will see the work performed on a lit stage with costumed performers. "But they'll have had a special peak into the rehearsal hall," Baker says.