Pickleball booms and caroms as courts open at Murdo Frazer 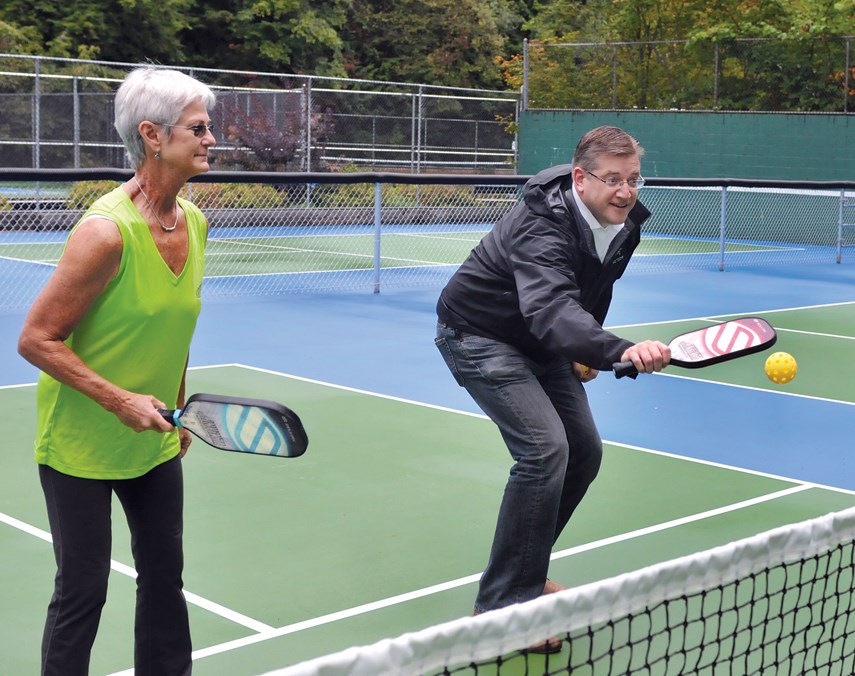 It wasn’t an unusual occurrence on a pickleball court.

In fact, Allan Gauthier, a North Shore pickleball court fixture for the last few years, says things like that happen a lot.

Two new pickleball players saw each other and realized they’d been neighbours 20 years earlier. There are a lot of those friendships, Gauthier notes. Two friends lose their neighbourhood connection and, despite being in relatively close proximity, find themselves in orbits that never quite overlap.

But with paddles in hand, the old acquaintances got reacquainted as wiffle balls whistled past them.

Gauthier has seen plenty of folk who discover, “that people are still alive and playing pickleball,” he says with a laugh.

Gauthier was in a celebratory mood following the ribbon cutting at the Murdo Frazer courts Sept. 26. District of North Vancouver Mayor Mike Little also tried his paddle at the event.

“He’s never played before but he was a quick study,” Gauthier says.

Pickleball is a bit like “standing ping pong,” Little says.

“It was a ton of fun,” he told his council colleagues Monday evening. “There’s probably some very embarrassing photos of me attempting to do this [that are] going to be coming out in the newspaper at some point.”

The sport is enjoying rapid growth on the North Shore.

Two years ago, the North Shore Pickleball Club had 240 members. Now they’re up to 477, according to Gauthier.

Asked if there’s been a resurgence, he laughs.

With its small courts, short nets and games that last between 12 and 15 minutes, pickleball is ideal for senior athletes.

“As we get older, we can’t do all the running that’s required to play tennis,” he says.

Rather than a maximum of four players on a tennis court, a pickleball court on a dry day can resemble a high school reunion.

“You have just as many people waiting on the sidelines to get into the next game,” Gauthier says. “Sometimes we have 40 people there.”

A crowd of that size tends to attract more potential players, Gauthier continues.

“They just stop and watch and then we invite them in to play and next thing you know you’ve got somebody else addicted to it,” he says.

Paddle-pushers range in age from teenagers to mature athletes such as Elmer Helm, 93, and his 91-year-old partner Jack Hardy.

The sport’s popularity is a change from the nascent days of North Shore pickleball when court time was hard to come by and in one instance, players had to bring in their own pickleball nets and take them down at the end of the day.

“That was exhausting,” Gauthier says.

But since forming a club and forging relationships with each municipality, the sport has flourished.

In Lions Gate Village, the new Fullerton Avenue rec centre, scheduled to open in 2020, is slated to include pickleball.

The most pressing pickleball need is east of the Seymour River, according to Gauthier, who says there are frequent overflow at the Little Cates courts.

“Nobody wants to drive anymore on the North Shore,” he notes. “It would be wonderful to have more space in that area.”

But for now, Gauthier says he’s happy with Murdo Frazer.

However, he notes that the sport’s popularity may be spreading beyond the North Shore.

“This is really going to satisfy our requirements for some time – if we don’t get too many of the Vancouver people driving over to use our courts.”