A milestone in the complex world of local liquor history, last week saw the opening of Long Table Distillery, amazingly the first to open in the region for many decades.
Mar 3, 2013 2:00 AM By: Tim Pawsey 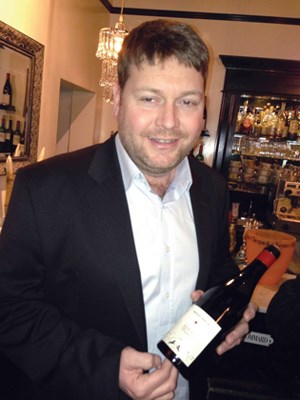 Nicolas Jaboulet is one of the winemakers behind Maison Nicolas Perrin Syrah Viognier 2011. Scan this photo with the Layar app to watch a video of him talking about the wine.Tim Pawsey

A milestone in the complex world of local liquor history, last week saw the opening of Long Table Distillery, amazingly the first to open in the region for many decades.

Greater Vancouver has lagged behind other areas of the province, which is now home to eight distillers. But the emergence of polished but friendly Long Table (at Beach Avenue and Hornby Street between the Burrard and Granville streets bridges) is about to change all that.

In fact, if owners Rita and Charles Tremewen have their way, Vancouver's first craft distillery will launch a small industry akin to Portland's Distillery Row.

Walk in to their sparkling new tasting room at 1451 Hornby St., just down from Pacific Avenue, and your eyes will be drawn immediately to the namesake long table (made from a single, giant slab of Sequoia redwood), and then, beyond, to the gleaming, 300-litre handmade Christian Carl copper still, clearly visible through the full-width rear window.

As we sip on a gin and tonic, garnished with a slice of cucumber, Charles and Rita explain how it all came to be after a visit to Portland's Distillery Row found them asking themselves, why not in Vancouver?

Charles has a background with Salt Spring Coffee and Nature's Path Foods, so it makes sense that his passions for sustainability and background in the food industry should be merged in the production of craft spirits.

Currently there are two products on offer, and I was truly impressed with both, the gin in particular, though. It's extremely pure and clean tasting with a definite up front juniper personality and a gentle citrus undertone, super smooth, and even though obviously quite happy with a G&T would definitely shine in a dry martini.

Stoned Texada vodka is so named because it's filtered through Texada limestone.

"We wanted to create something a little different . . . so we ran it through the limestone to polish and mineralize it," says Charles. The result is more mouthfeel and a definite mineral character, as well as a mild hint of lemongrass, through which it's also filtered. Charles says he already has no shortage of "converts."

They should be available at BCLS this spring. Distillery tours are offered at 4 p.m. on Saturdays. Visits at other times are by appointment only.

If you're a whisky drinker and would like to lend a hand to a worthy local cause don't miss Team Hope Edgemont Fine Wines, Spirits & Ales Tip A Wee Dram whisky tasting.

More than 60 whiskies (paired with tasty bites) will be poured by representatives from the distilleries on-hand to answer questions. You can bid on whiskies and other great items, while thrilling to the pipes and drums of members of Delta Police Pipe Band, hot off their recent appearance with Sir Paul McCartney. Proceeds go to the B.C. Cancer Foundation. The event is on Friday, March 8, 6-10 p.m. at the Scottish Cultural Centre (8886 Hudson St., Vancouver).

Belly's Best Wine of the Week

Well-balanced, fresh and fruity up front but nicely grippy on the palate, blue and black fruit wrapped in easy tannins, followed by distinctly mineral and peppery notes.