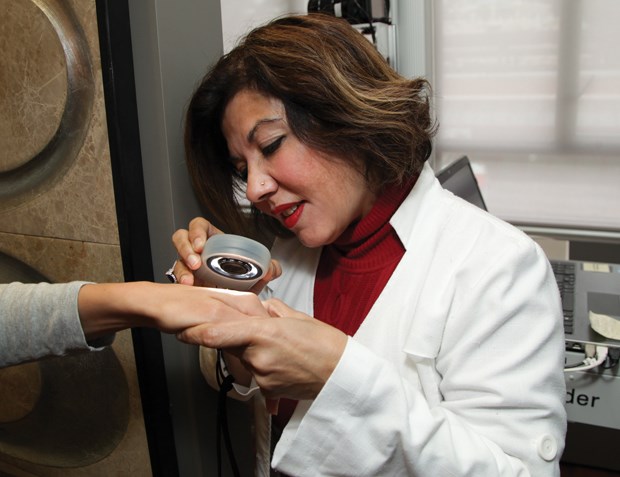 According to the Canadian Cancer Society, an estimated 6,800 Canadians were diagnosed with melanoma skin cancer in 2015.

However, a new technology to monitor moles and skin lesions on the body may help detect skin cancer early on, and it’s available here on the North Shore.

Dr. Shehla Ebrahim, a family physician with a focus on dermatology, uses a computerized mole mapping system called FotoFinder, which scans the entire body for moles and creates an accurate readout of the lesions on high-resolution photos. These photos allow Ebrahim to trace the progression and changes to skin lesions over time and observe any abnormalities.

“There’s nobody on the North Shore who’s offering this. I think there are a couple of dermatologists doing this in Vancouver, but nobody on the North Shore,” said Ebrahim.
Ebrahim started her career as a family physician in 1992. In 2005, she opened a clinic in North Vancouver devoted to esthetic medicine, which she described as the use of “medical treatments in order to improve one’s physical appearance.”

Ebrahim now has a second clinic called Ambleside Dermedics in West Vancouver. Besides offering many beauty and esthetic enhancement procedures, the clinic also does skin and dermatology treatments, including mole mapping. “About five years ago, I felt that there was an acute need for family physicians, for myself, at least, to expand into medical dermatology,” she said. “When I was practising family medicine the earliest time I could see a dermatologist or send my patient to a dermatologist was about six months and that hasn’t changed yet.”

In the fight against skin cancer, early detection and prevention is essential. According to a 2014 report by the Canadian Cancer Society and Statistics Canada, skin cancer is the most common cancer in the country, with melanoma accounting for three per cent of all new cancer cases. When skin cancer is detected and treated early on, however, the results are generally positive.

According to B.C. Cancer Agency spokesman and University of British Columbia professor Dr. Harvey Lui, mole mapping isn’t necessary for most people that might have moles or skin lesions on their body.

“For one-off lesions that occur sporadically from time to time I’m not sure that this technology is really necessary,” he said. “However, if you have a patient who might be more complicated with lots and lots of spots, then that’s probably the best place to have this kind of approach.”

A physician or dermatologist, he said, can usually make the decision to biopsy, remove, or continue monitoring a mole just by “eyeballing” it.

“There aren’t really clear studies to suggest if you meticulously map every single patient in detail and follow them over many years that you’re necessarily going to decrease the overall rate of melanoma or the overall death from melanoma in the population,” he said.

Ebrahim said that the skin is the body’s largest organ, but a lack of awareness when it comes to taking care of it has led to a spike in skin cancer and melanoma in recent years.

She recommended mole mapping for clients that have excessive moles or skin irregularities, fairer skin, or for people with a family history of skin cancer. “We call these patients back typically in about six months. If there is a change, the mole mapping, which is like a computer analyzing system, will pick up a change. That allows me to give further diagnostic accuracy,” she said.

If a change in a client’s moles is observed through mole mapping, Ebrahim can recommend a biopsy of the lesion, surgery to have it removed, or, if there is no change, continue to monitor the area for future changes.

Lui said that if mole mapping was truly beneficial to the Canadian public, it would be covered by the health care system.

“If there was strong, strong evidence that doing this would be a major benefit to the health care system at large, then generally, no matter all the complaints we make about government, usually the health care system does its best to try and accommodate really, really important and game-changing technology,” he said. “This may get there one day, but for now it’s for interest, it’s for potential use – but not to every single person out there.”

Mole mapping is currently not covered through MSP and costs $300 per year at Ambleside Dermedics. “There’s a lot of debate, lots of discussion about the benefits of mole mapping and digital photography (of moles),” said Ebrahim. “Cost is a major factor.”

“I think given the rising incidence of skin cancer and the health care costs, it seems the most logical thing to do would be for the government to cover it,” she said.