CANINE CONNECTION: Treat your way to a great game of fetch

It was more than 20 years ago when I brought my Doberman pinscher home at eight weeks of age. Once home I pulled out a ball and tossed it across the yard. I then watched Alex trot a few steps in the direction of where the ball landed.
Apr 4, 2018 7:55 AM By: Joan Klucha 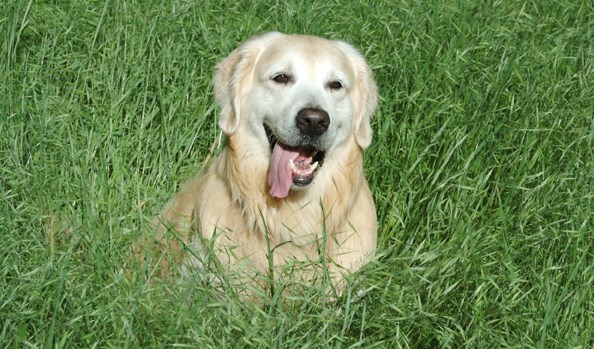 It was more than 20 years ago when I brought my Doberman pinscher home at eight weeks of age.

Once home I pulled out a ball and tossed it across the yard. I then watched Alex trot a few steps in the direction of where the
ball landed.

He stopped, looked up at a bird flying overhead then wandered off into the bushes.

Undaunted, I tried again. This time I rolled the ball along the grass instead of tossing it from shoulder height and again Alex trotted a few steps towards the rolling ball, stopped, picked it up this time, then trotted off to the bushes where he left it.

Alex was not a retrieving dog and despite my best efforts he never developed a desire for retrieving anything.

If your dog is more of the Alex type than the fetch type of dog, there are a few things you can do to teach them to play fetch.

The first thing to do is to see if the dog at least has a desire to chase a ball. If they do, that is a start.

If your dog will chase a ball then find a way to keep him motivated like using a ball filled with a treat or a bit of peanut butter. If your dog is able to use the treat inside the ball to reward himself for chasing the ball, they tend to pay more attention to the ball in general.

Once Fido begins to chase the ball enthusiastically you can start to treat Fido by hand; which is Step Two.

In Step Two, you toss a treat-filled ball and encourage Fido to chase it. When Fido is eating the treat out of the ball, you approach with a yummier treat and ask Fido to give by placing the yummy treat at his nose, which redirects his attention to you and giving up the ball. Fido then gets the super yummy treat from your hand.

Then refill the ball with a second super yummy treat so Fido doesn’t remain focused on you and ignore the ball.

You want him to continue to chase the ball so you will need that super yummy treat to be in that ball when you toss it again. Continue to practise like this but each time you approach Fido with a super yummy treat, stop short a few feet and encourage him to come to you for the additional yummy treat.

The next step would be to start calling Fido to return to you for the treat once you have tossed the ball and he has chased it. He likely won’t return with the ball the first few times, but he will begin to understand the game of coming back to you after the chase. Once this happens you can start the two-ball game.

Once he has gotten the hang of chase and give you can add a second ball into the mix. When Fido chases the first ball and begins to return to you (with or without the ball), toss out a second ball. He will think he is in ball heaven and get more excited for the game of fetch.

To really ramp up the motivation, hold onto Fido’s collar and make a big crazy deal about the ball before you toss it, then when you toss the ball don’t let go of the dog right away. Wait for a bit of anxiousness to build and then let him go to chase the ball.

If a ball is just not cutting the mustard, then try another toy. As an example my dog Carter loses interest in chasing a ball after about the third toss. But if I toss his favourite snow leopard stuffy or his stinky-pinky tug rope he will chase and return all day long.

One thing you don’t want to do is engage in a game of keep-away. As soon as you start chasing after your dog when he has the ball, it turns into a totally new game of keep-away, which tends to be a lot more fun than fetch.

If after all that your dog still won’t play fetch then consider switching goals like I did with Alex, and teach your dog how to track instead.