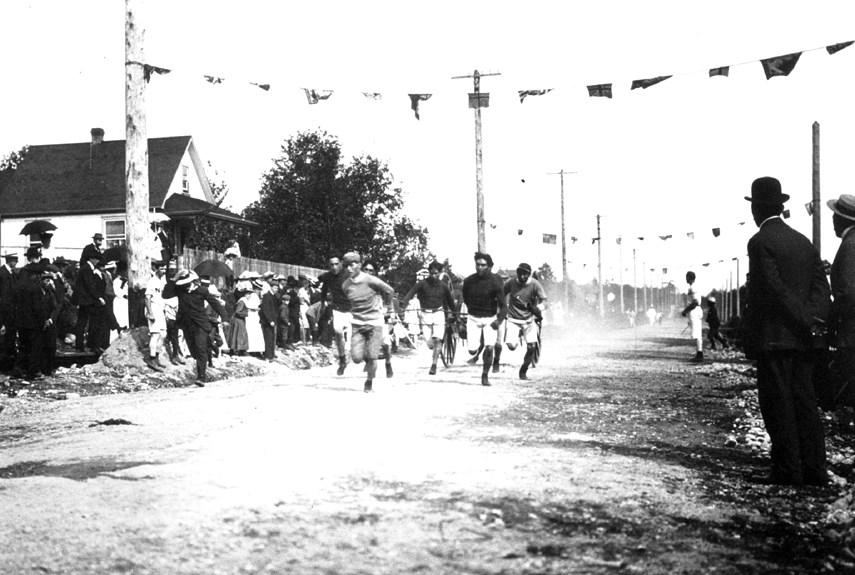 This photo shows an unidentified First Nations team participating in a hose reel race on East First Street. A common and well-attended sport at the turn of the 19th century, teams of firefighters (often volunteer units) competed to draw a 450-pound reel cart carrying 350 feet of hose yards to a fire hydrant.

They would then attach and lay 300 feet of hose, break the couplings, and screw on a nozzle. The races were timed and a good team could complete a 300-400 yard course in under a minute.

Community events and celebrations frequently featured hose reel races, often offering significant prize purses to attract the best teams. As a result, betting on these races could be fierce.

North Vancouver held a hose reel race on Canada Day (then called Dominion Day) in 1906, according to a newspaper account of the era. The teams entered in this competition were: Cedar Cove, Steveston, Indian Mission, Vancouver old timers, and North Vancouver.

Click here for more information about the history of the North Shore and to learn about MONOVA: Museum of North Vancouver, opening in 2021.

Currently, the Archives of North Vancouver at 3203 Institute Rd. in Lynn Valley is open by appointment only. Contact: archives@monova.ca