Canoe was carved from a 55-foot cedar log that was donated by the Capilano Shingle Co. 'after months of search by tugboat captain Charlie Cates'
Jun 20, 2021 9:05 AM By: North Shore News 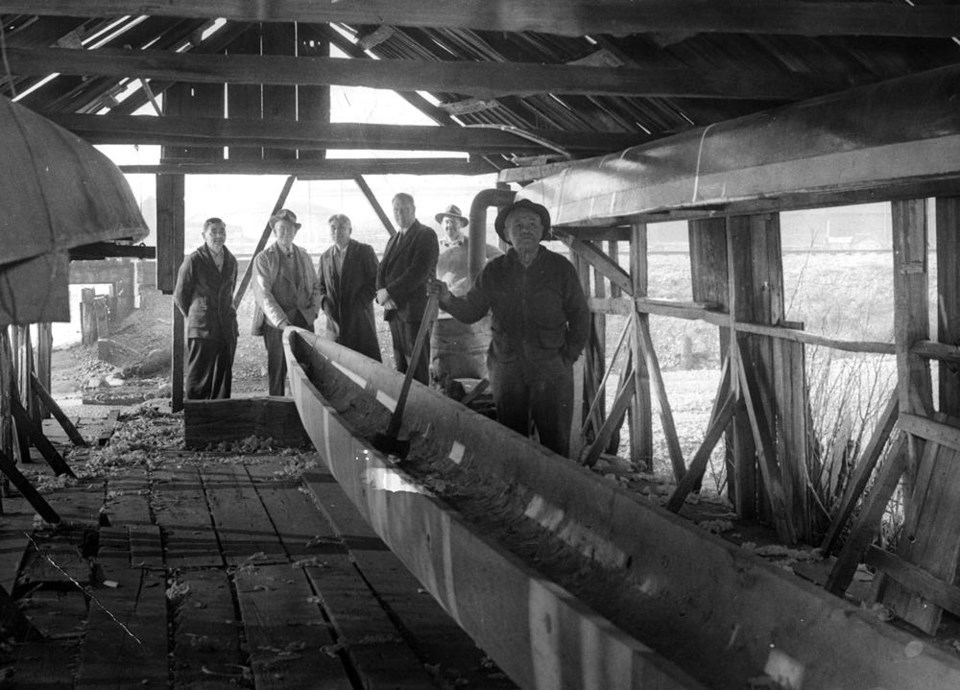 This photo was taken during the construction of the racing canoe “Capilano Warrior” in the early 1950s. Master canoe builder Harry Moody (holding axe) is seen with Charlie W. Cates, the tall fellow in the background. Captain Charles Cates, Jr, of CH Cates and Sons Ltd., was Mayor of North Vancouver from 1953 to 1957. Also identified in the photo are Dennis Paull, Dan George, and James F. Cates.

According to newspaper accounts of the time, the 50-foot canoe was carved from a 55-foot cedar log that was donated by the Capilano Shingle Co. “after months of search by tugboat captain Charlie Cates.”

Moody (ca. 1877-1962), who worked as a longshoreman, was a master builder and worked with and mentored canoe families amongst the Sḵwx̱wú7mesh Úxwumixw.

In the winter of 1953-54, the Capilano Warrior was badly damaged when the shed it was stored in collapsed under the weight of heavy snow. Harry Moody and his nephew Kenneth Discon skillfully mended the canoe to its original form.

Visit the MONOVA website for more information about the history of the North Shore and to learn about MONOVA: Museum of North Vancouver opening in 2021.

Currently, MONOVA: Archives of North Vancouver at 3203 Institute Rd. in Lynn Valley is open by appointment only. Contact: archives@monova.ca

Time Traveller: Many artists made their masterpieces in North Vancouver squatters shacks
May 30, 2021 9:05 AM
Comments