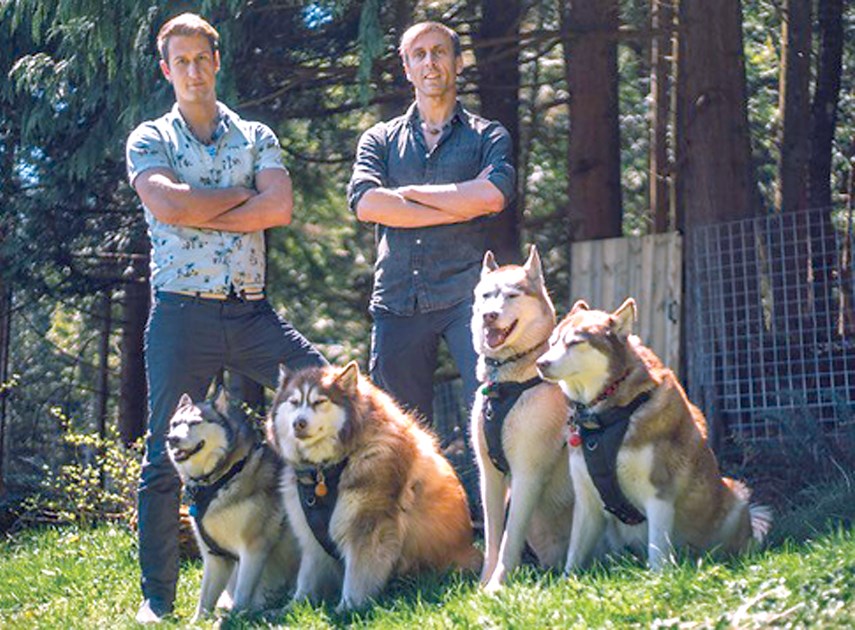 Darijan and Dylan Northstar, a.k.a. The Dog Dudes, pose with Siberian huskies Sky (who recently passed away), Orca, Ocean and Phoenix. The West Vancouver duo has been practising a pack power dog behaviour therapy program for seven years.Supplied

Dylan and Darijan Northstar were having a dog-day afternoon.

They were visiting a client’s house and meeting a pooch displaying a bounty of bad-dog traits – aggression, antisocial behaviour, anxiety – that was taking its toll on the household.

But for the eponymous Dog Dudes, Dylan and Darijan, it’s all in a day’s work.

“We deal with a whole spectrum of issues,” Dylan explains. “A lot of the dogs can have past trauma or abuse or neglect. … (But) sometimes issues can develop from excessive love, or excessive codling of a dog too, and not giving it enough direction and boundaries.”

And while dogs with behavioural issues can stem from all kinds of diverse backgrounds, no matter the cause or the symptoms, The Dog Dudes are touting a pack mentality as a potential remedy.

When The Dog Dudes come knocking, they would tend to bring along Sky, Phoenix, Ocean, and Orca with them in tow, a serene pack of Siberian huskies adept at calming down other dogs when they’re in a hyper-agitated state.

“Animals relate to their own kind,” Dylan explains. “Often dogs are pack animals. It’s tapping into their instincts and their pack mentality so they naturally inherently follow leadership out of a pack. … It sets the right example for the dogs to mirror and become balanced with. A lot of the issues that these dogs show come from a place of insecurity and anxiety.”

After visiting the aforementioned client’s house and sitting with their former pooch-patient, The Dog Dudes, who live in West Vancouver, observed a startling change in the previously frantic canine.

“She’s now like a teddy bear,” Dylan says. “After about five lessons she was already transformed.”

Dylan and Darijan have been in the pack power dog behaviour therapy business for seven years. Lately, they’ve had to make some adjustments. Sky, the matriarch of the pack, recently passed away, effectively turning the usual pack of four into a trio of huskies.

“It’s really been a challenge adapting to the reality without her,” Dylan says. “Now that she’s gone, (Phoenix has) sort of been stepping up his leadership a little bit.”

As The Dog Dudes and the pack soldier on, however, Dylan shares more details on their methodology.

He says that by removing the excessive alpha energy that some lone dogs may possess, or certain packs with bad habits, and by harnessing the calming energy and etiquette of their huskies, they’re able to teach wayward canines the importance of respect and trust within a group.

“A lot of the common training methods that are out there teach an avoidance strategy,” Dylan explains. “We take a totally different approach that you can’t just avoid the issues – all you do is build up those antisocial and anxiety issues in the dogs by doing that. You’ve got to get them to face their problems and be able to intervene in a calm and assertive way.”

Dylan was born in the U.K. and Darijan was born in Serbia. Both grew up in Canada, and both are longtime animal lovers that tout many years’ experience.

According to Dylan, a Cesar Millan-style show about the duo’s work has been picked up, with filming scheduled to start later this summer that will follow them and the pack as they venture to clients’ houses and showcase the transformation stories of the Dog Dudes training bad dogs into good ones.

Dylan recommends checking out The Dog Dudes’ website at dogdudes.com for more information about the power of the pack and to follow their progress.

“In the Lower Mainland we’ve never heard of anyone taking this approach at all,” he says. “I think we’re quite unique.”