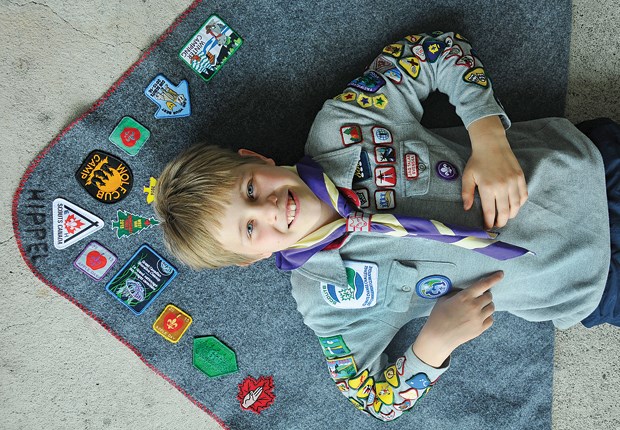 The smooth tone is punctuated by some techno sounds.

“It’s also got this amazing beat,” notes Ethan as he separates the tracks on his iPad to isolate an example.

The song is meant to represent elements of Ethan’s personality, and composing it was one of the criteria for a spirituality badge he earned with the 1st West Vancouver Scout Group.

Ethan has been a member of the local troop since he was eight, and recently he did what leader Geoff Nemeth calls “a very rare event” and something he has never seen in all his years with the Cub Scouts: Ethan earned all 64 Cub badges available.

“When I started I thought I was just going to be an average guy at Scouts and then I got a few badges and I liked getting badges, and then the second year I decided I wanted to get all the badges. And from there I’ve worked towards getting this, which is everything,” says Ethan.

Sitting in an interview room at the North Shore News office with his mom Jenny recently, Ethan discusses the many badges adorning his uniform. They are different sizes and colours; some are square, some triangular, some big, some small, and there are even a bunch of stars. He explains that the square ones take multiple other badges to earn, and the stars require badges and multiple criteria to earn. A grey fire blanket displays a collection of badges for philanthropic activities, such as participating in the annual Scouts apple sale fundraiser and Christmas tree sale.

When asked which badge is his favourite he looks them over briefly and replies: “I can’t really pick one but one of my favourites was definitely the carpenter badge when I got to make the soap box car with my grandpa.”

The car was made from scratch (not from a kit) and took a few weekends to complete. Ethan says he also likes the badges that involve creativity and making art, especially the spirituality badge for which he composed his song because he likes music.

“I feel really accomplished,” says Ethan of his awards.

On April 19, the 1st West Vancouver Scout Group held a small award ceremony at their regular meeting place at Pauline Johnson elementary to present Ethan with his final badge. Mayor Michael Smith was on hand to present the award.

“He’s a fine young man and I think he’ll develop into a real credit to the community,” says Smith. In an interview from his office after the event, Smith noted this is the same Cub Scout troupe of which he was a member when he was a kid.

“I can remember that I was not nearly as successful as Ethan. I probably won about 60 less badges than he did,” notes Smith. “I remember the first time I went on a camp-out, my group couldn’t get our camp fire started. I was wildly unsuccessful compared to him.”

Smith says he thinks Scouts is a good place for kids to learn the value of teamwork, community service, and serving others.

The mayor was invited to hand Ethan his final badge at the special ceremony.

“I thought it was terrific,” he says of Ethan’s accomplishment. “I think the pride that he will have because of his achievements will carry him along to other activities he takes on. I think he will strive to be successful with whatever he does as a result of his experience with the Scouts.”

According to its website, the 1st West Vancouver Scout Group was organized in 1927, and today offers programs for kids ages five and up. There is also another West Vancouver-area group: 3rd West Van Scouts.

Cub Scouts is specifically for kids in grades 3 to 5, so this is Ethan’s last year with the group. He turns 11 in August, and probably won’t continue on to the next level of Scouts because he’s already pretty busy with competitive swimming, Swedish school, soccer, and acting. His first professional speaking role will be on the TV show Untold Stories of the ER, scheduled to air in the fall.

“He’s got a lot of stuff on his plate but he’s really good at prioritizing and not overdoing it,” says Ethan’s mom Jenny. She tears up a bit when asked how she feels about Ethan’s accomplishments in Cub Scouts, which include winning the Kub Kup for Cub of the year.

“I’m super proud of this guy,” she says.

Ethan and his mom say he has had a lot of good mentors over the years, including teachers, Cub Scout leaders, family, and friends.

Teamwork is an important part of Scouts and Ethan recognizes the camaraderie and friendship of his fellow troop members. He says he has learned a lot from his experience with the program and has done a lot of  things he wouldn’t otherwise have tried. And how would he feel if he hadn’t earned all 64 badges? “I wouldn’t be as happy as I am now but I think I’d feel accomplished (with) what I have,” he says.

Ethan has a message for other boys and girls interested in earning all the Cub Scout badges.

“Stick with it and don’t stop trying,” he says. “Don’t rush through it, sit down and take the time. And don’t always be stressed about it because you’ve got a lot of time to do it.”

Older and Wiser: Let's look forward to brighter and better days by taking care of our eyes
Feb 28, 2021 9:05 AM
Comments