Public art as a reflection of community in West Vancouver

In 1963, a West Vancouver couple travelled to Italy for their honeymoon. There they visited the Carrara marble quarry where Michelangelo got the stone to build his famous sculpture called David.
Feb 3, 2017 3:48 PM By: Rosalind Duane 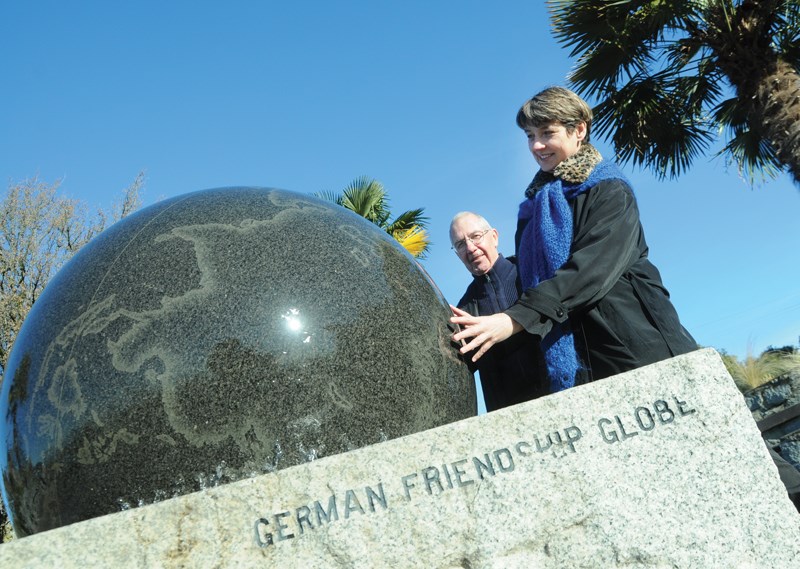 In 1963, a West Vancouver couple travelled to Italy for their honeymoon.

There they visited the Carrara marble quarry where Michelangelo got the stone to build his famous sculpture called David. Stone from the quarry has also been used to build the Marble Arch in London and the Pantheon in Rome, among other notable monuments and buildings around the world.

The young couple chose 10 pieces of marble from the quarry and shipped them back to their home in Horseshoe Bay where the stone arrived by truck to great neighbourhood fanfare.

It was then that District of West Vancouver Coun. Nora Gambioli’s mom, Joan, set out to carve the pieces she had brought back from Italy. A stone sculptor, Joan finished four of the pieces before she passed away when Gambioli was a child.

Her father, Remo, didn’t want to get rid of the 10 tons of marble in the backyard that Joan had worked on, and so it sat for decades until about two years ago when Remo also passed away just two weeks after Coun. Gambioli joined the district’s Public Art Advisory Committee as chairwoman.

The timing was fortuitous.

When Gambioli told the group about the collection of Carrara marble sitting at her parent’s house, they were happy to have it. It took a year to complete the task, but the marble is now arranged in a public art display at Ambleside in front of the Silk Purse Gallery.

It is hoped the remaining six unfinished pieces will all eventually be carved by artists chosen by the advisory committee. Gambioli says she has watched passersby touch the marble, and little kids climb on it, and that’s a good thing.

“I’m not an expert, but art is a form of expressing the community and the community culture, I think ideally,” she says and adds: “I think that art has to be, and I think our committee is quite dedicated to art being, as local as possible or at least representing local artists, materials, or themes.”

Some residents love public art and some don’t, but Gambioli says public art in West Vancouver takes up only a small part of the district’s overall budget, about $50,000 a year, which is about half of what’s needed to commission a significant piece.

So far the committee hasn’t commissioned any art, but plenty of pieces dot the landscape: in galleries, on beaches, on street corners and in public buildings, notes the district’s website.

If you haven’t yet, take a look at the south wall of the Aquatic Centre for an installation of moveable sunshades, or sit in the Big Chairs by the Seawalk at the foot of 18th Street. Some public art in the district is highly visible, but some of it is subtle. Have you seen the small, stone figure of a mother nurturing a child in an area of plants by the Beach House Restaurant in Dundarave?

“It’s just something you kind of have to walk by and discover,” explains Doti Niedermayer, senior manager of Cultural Services, who says public art is an important part of public space.
“It reflects the culture of the community, helps with community identity and pride. It creates a gathering place. I think the best pieces of public art create a place where people stop and gather and look at the art work, have a discussion. It reflects either the spirit of the place or has something to say about the environment or politics or beauty, or any of those things. So I think public art is just taking private out into the public realm.”

Although West Vancouver has had public art for some time, it’s fairly recent that interest in it has increased, notes Niedermayer. Most public art pieces in the district are static, but some get rotated (such as paintings), and some go into storage.

The Public Art Advisory Committee was formed to develop and implement a more official plan for the art, and is currently in the process of developing a new, detailed arts and culture strategy.

Formalizing the processes around public art means that the committee now works from a set of criteria when making decisions to help avoid collecting pieces that are too difficult or expensive to maintain, or don’t have significance to the community.

In the past, there was a less official process in place. As a result, the district is in possession of a few items that probably shouldn’t have been accepted, notes Gambioli.

For example, a nine-foot-tall stone angel statue that has sat in a rail car at the public works yard for 30 years. The donated piece hasn’t had a permanent home for decades and has to be kept out of the rain for preservation. It is now the subject of a study by the advisory committee to determine whether it can be sold or what should be done with it.

“You have to be careful what you accept,” notes Gambioli.

Another example is a 20-foot-wide floral clock with eight-foot-wide arms that was built into the ground at Millennium Park to mark the year 2000. The clock was expensive to maintain and was finally removed about five years ago. Criteria are important, warns Gambioli. And cost of maintenance is an important one.

Although West Vancouver has a history of artists and architecture, it doesn’t have as much public art as other nearby communities. The committee hopes to grow the collection in the coming years.

Gambioli says a new avenue of pursuing new pieces is through working with developers to consider public art as part of their proposals. She would like the district to end up with a comprehensive list and some activities around public art, such as art walks.

“We’re definitely finally making progress,” she notes, and that’s in part because of the development of the advisory committee, which consists of one councillor, one district staff member, and six community members who all have some specialty in the arts, including a working artist and a landscape architect. Each brings a different perspective to the table. The committee works with council, district staff, and the community to make recommendations about potential public art displays.

Niedermayer, who is also a part of the committee, says there are going to be lots of opportunities for residents to provide input in the new strategic plan.

Although she likes a lot of the public art pieces, Niedermayer admits she is partial to the Welcome Figure at Ambleside.

“Because when I’m looking at the sunset or the sunrise and I’m looking towards Lions Gate (bridge), there’s the figure, this welcoming figure. It really stands out as a piece of beautiful art in a beautiful setting. It’s part of the landscape,” she explains.

“I love how in many ways they (public art pieces) work with the environment. They are integrated into the environment and they reflect our ocean and our wood and
our seashore.”