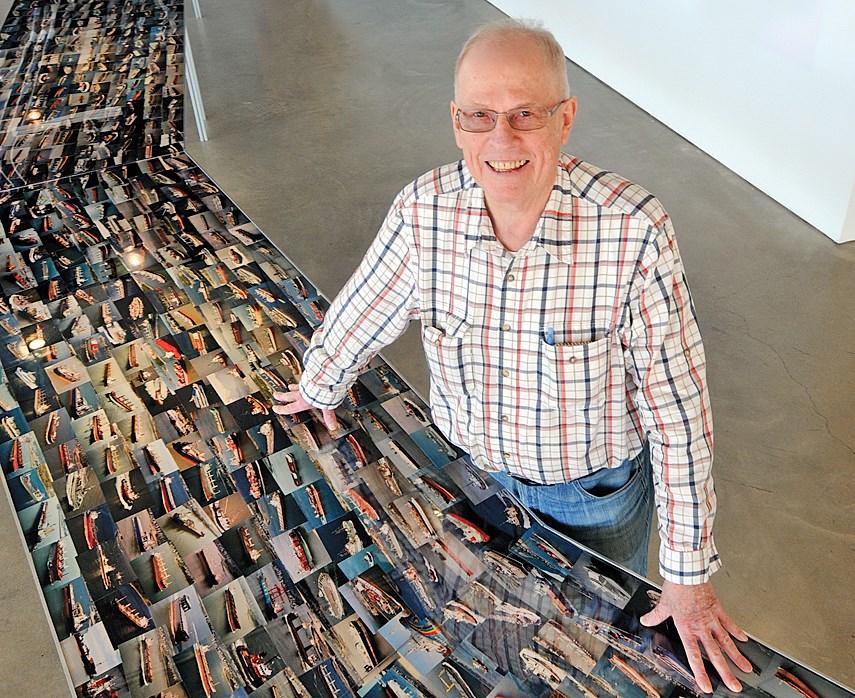 Rod Logan’s obsession with ships dates back to his childhood, if not earlier.

His mother was pregnant in the fall of 1941. She’d revelled in Shanghai’s cosmopolitan culture in the 1920s and ’30s but, shortly before Pearl Harbour, she knew things were going to get bad.

Her husband’s passport had been seized. She fled aboard a ship, eventually making it to Vancouver where she gave birth to Logan.

“I think it was the second-to-last ship to make it out of Shanghai,” Logan marvels.

When it comes to ships, he should know.

Despite being “totally ignorant” about cameras (“When I try to sit down and read manuals . . . my eyes glaze over and I just give up,” he admits), Logan is currently exhibiting three decades of his photography at the Polygon Gallery. Approximately 10,000 photos are on display. Each is a picture of a ship.

“I wanted to photograph every ship that came into or out of Vancouver,” he says. “It’s a man thing, I guess. Men collect stuff and they do stuff that’s nuts.”

The first time he rode a ship was to see his father. Stuck in Shanghai, Logan’s dad befriended an American Air Force officer. “He wrangled a trip to Shanghai for my mother, my brother and I in 1946 on an American troop transport out of Seattle,” Logan explains.

Four years old at the time, Logan says he doesn’t recall much about the trip.

“But I can remember we sailed into Manila Bay.”

One year earlier, approximately 100,000 Filipinos died in the Battle of Manila. The city was shelled and naval wreckage was strewn across the port.

Logan recalls masts, funnels and superstructures sticking above the waves like skyscrapers of a lost city.

Eventually, and “with great difficulty,” the whole family returned to Canada, Logan says.

After a youth spent bolting down fiction about seafaring adventurers, Logan got a job as a longshoremen, giving him easy access to his hobby.

“Back in the heyday . . . there were days I worked afternoon shift so I could photograph,” he says.

He’d photograph ships five, six or seven days a week, often making the trip from his Burnaby home to perch on the Ironworkers Memorial Second Narrows Crossing or the Lions Gate Bridge.

He annotated each shot of ships, tugs, and barges steaming into and out of Burrard Inlet. In his pre-digital period, he’d print each roll of a film at a one-hour photo shop. It’s not a completely unusual hobby, he says, noting he’s met photographers who shoot ships, planes, trains, and trucks. “You can imagine most of these guys aren’t married,” he says with a laugh.

Logan is quick to refute the claim that all ships look alike. There are “subtle differences” in all of them, he says.

But he never had a notion his 3.5x5’s would ever hang in a gallery. Actually, he’d been thinking of getting rid of his photo duplicates, which took up 26 linear feet of shelf space.

Deciding to downsize, he tried to sell the photos, eventually finding a buyer who brought the pictures to the attention of the Polygon.

“I was astounded that anybody would care,” Logan says.

Walking through the exhibition has been overwhelming, he says. “You get a swelled head,” he says, with a laugh.

He still photographs ships. Not in the rain or snow anymore, but when the sun’s shining, he tries to add one more ship to his collection.

For those who have a similar fascination with ships, Logan is set to attend a reception for his show at the gallery on Saturday from 1 to 3 p.m.