A flurry of sound echoes through the hallways of a North Vancouver high school. Although it’s a Saturday, students dressed in sharp black attire can be seen bustling from one room to the next at Carson Graham Secondary.
Nov 23, 2019 7:30 PM By: Ben Bengtson 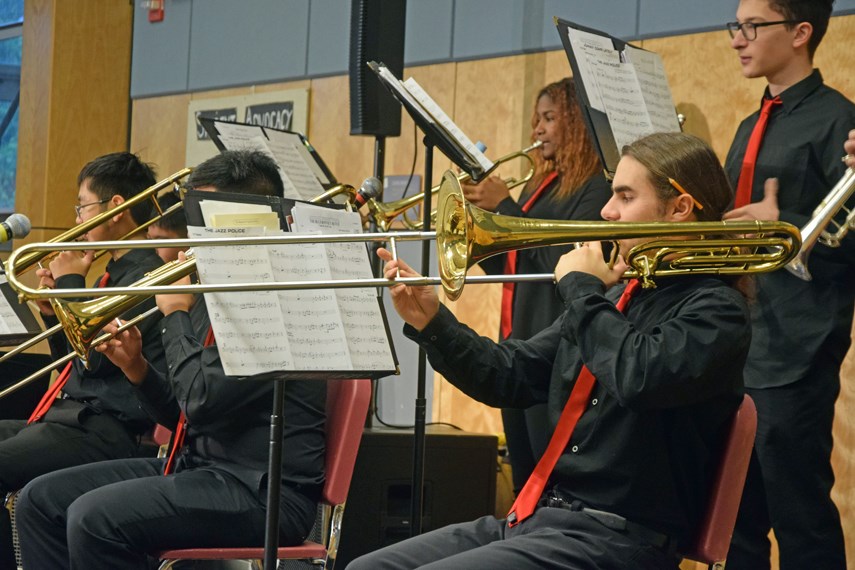 A flurry of sound echoes through the hallways of a North Vancouver high school.

Although it’s a Saturday, students dressed in sharp black attire can be seen bustling from one room to the next at Carson Graham Secondary.

And for once, the kids are being encouraged to be loud – but it’s not the usual sounds of youthful laughter and rip-roaring energy produced by a healthy dollop of teenage rebellion that are making soundwaves here. These students are all musicians. They’re walking around tuning big brass instruments, strumming guitars, and proving that any solid mass can become a drum set if it’s treated the right way.

Jake Rubin, a Grade 12 student at Argyle Secondary, has been playing classical piano since he was five years old, but he really took to jazz music a few years ago.

He notes a great truism about the genre of music that Art Blakey once remarked “washes away the dust of everyday life”: that it’s not so much about the notes you’re playing as it is about the way that it feels.

“I love the atmosphere behind it, all the harmonies you can make out of it, and the fact that you can play any note along with any chord and it usually sounds good,” he jests. “It’s really cool.”

Rubin was one of approximately 130 students from all six North Vancouver high schools who turned up on Saturday for the first North Vancouver School District Jazz Festival.

Organized and founded by Carson band director Kevin Yang and Argyle band director Diana Chan, the purpose of the one-day event was to take get students out of their usual classroom environments and interacting with their fellow young musicians on the North Shore.

“Every single school has at least one jazz band, and we all have very vibrant programs and students. The reason why we wanted to create a festival this year is because sometimes we are all in our own classrooms doing our own thing and may not know what is happening on the North Shore, which is exactly why we want to get kids together,” said Chan.

Comprised of a series of full-band performances and jazz clinics, band students at Handsworth, Windsor and Argyle got the day started with their own performances of jazz standards and ballads as they were watched by their fellow students as well as adjudicators Dennis Esson and Steve Kaldestad, faculty members at Capilano University’s jazz studies program, and Jodi Proznick, an award-winning local musician.

After lunch, the groups switched and it was students from Carson, Seycove and Sutherland’s turn to perform for the large group.

“The level of talent is fantastic,” noted Proznick, who was named the 2019 Jazz Artist of the Year at the Western Canadian Music Awards. “I’m not just here because I love music and jazz and want to share everything I know, it’s because I deeply believe in the value of this whole exercise for helping to raise the next generation of citizens who are connected to their creativity, their sense of community.”

In addition to live performances, students in CapU’s jazz program offered music clinics based around the individual instruments that students played. One room was devoted to the saxophone, another to the piano, the drums, and many more.

The day ended with a student social and body percussion session comprised of all the youth in attendance.

“One of our goals here is also to connect post-secondary with secondary students on the North Shore,” said Chan. “Any time you can sit in and watch other people perform you can learn. You can meet people who play your same instrument and maybe be inspired and make a new friend and see what they’re doing.”

As Rubin and two other North Shore high school students sit in on their jazz piano clinic instructed by a second-year CapU musician, he was confident that he’d take his fondness for jazz music with him after he graduated.

“Piano’s been one of the cornerstones of my life. Even though I’m not going into music education in the future, I still want to have that with me.”