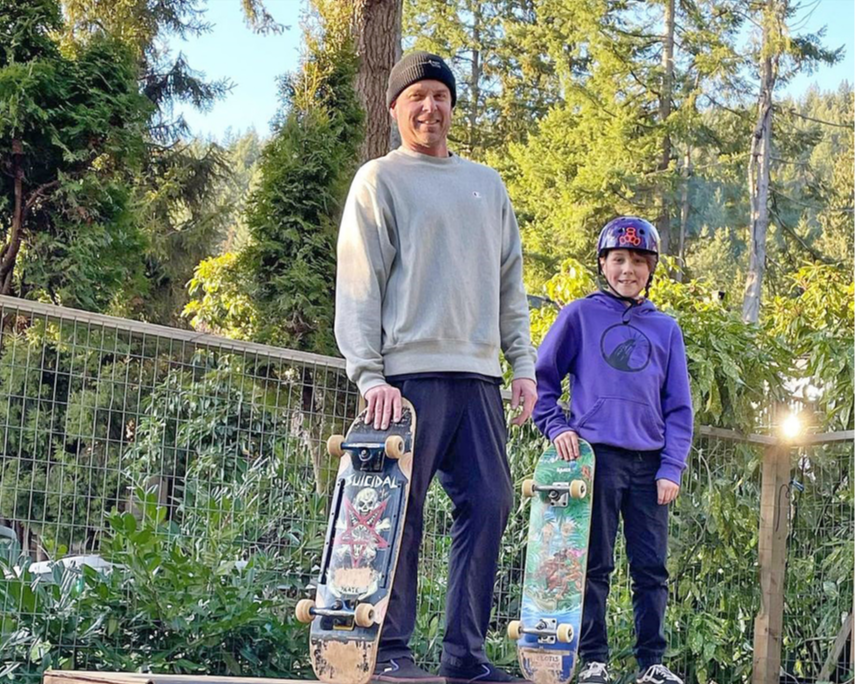 His interest in skating came about the way it usually does for anyone who’s ever carved out some time kickflipping, nosegrinding or just wanting to look the part: he saw an older kid doing it first.

“My older brother used to skateboard. He just left it lying around, so I grabbed it and started skating on it,” recalls Durnan.

It was the mid-1980s. A little skate troupe was formed made up of Durnan and five other friends. They’d roll around their native Ontario, practising their craft and “getting kicked out of places.”

But mainly, it was chance for Durnan and his friends to do something individually, together.

“I did play team sports but I never really wanted to, it was just what you did,” says Durnan, who’s lived in North Vancouver with his family for the last 15 years. “But skateboarding never stopped for me because I could always go out on my own if I needed to. I didn’t need to have anybody there. I still kind of do that right now.”

That special something that skateboarding imparted on Durnan’s life is something he’s now working to give back to the younger generation and a group of kids that could really use it.

In his mid-30s and seeking a career change, Durnan completed a program in therapeutic recreation. He was soon after hired to work in the Developmental Disabilities Association’s leisure program.

The centre in Vancouver where Duran was working was next to a skate park, which he would hit up before and after work every day. He quickly got the idea to bring the kids along with him.

“That’s where my idea originated from,” he says.

Things really started rolling during the early days of COVID, when Duran and his 12-year-old son, Jack, who lives with autism, started skateboarding together relentlessly to pass the cooped up days, even going as far as to build their own ramp in their Lynn Valley backyard.

“We were skating all the time and it just clicked in my head: he’s having such a great time and excelling with it, he doesn’t like team sports, he does not like to be in an organized event, so skateboarding is an excellent individual thing,” says Durnan.

And most importantly, he says: “There’s a big community of skateboarders that support each other.”

More than 20 kids living with autism are currently enrolled in the society’s daycamps, which Durnan hosts at Kirkstone Skatepark near Karen Magnussen rec centre.

Combining his love of skateboarding with his background in therapeutic recreation, Durnan says he has enjoyed helping kids and teens learns the ins and outs of balancing, moving and excelling on their boards.

“I always love seeing the joy in people’s faces when they’re skating,” says Durnan, adding that, generally speaking, some team sports may be particularly challenging for a youngster with autism, whereas skateboarding is an awesome individual activity that can foster a community of many. “I want to show these kids how to skateboard and give them the chance to be cool. That’s a great feeling to have.”

Spectrum Skateboard Society’s summer camps are on now, with weekly lessons set to continue this fall. Visit the society’s website for more information or to inquire about enrolling.