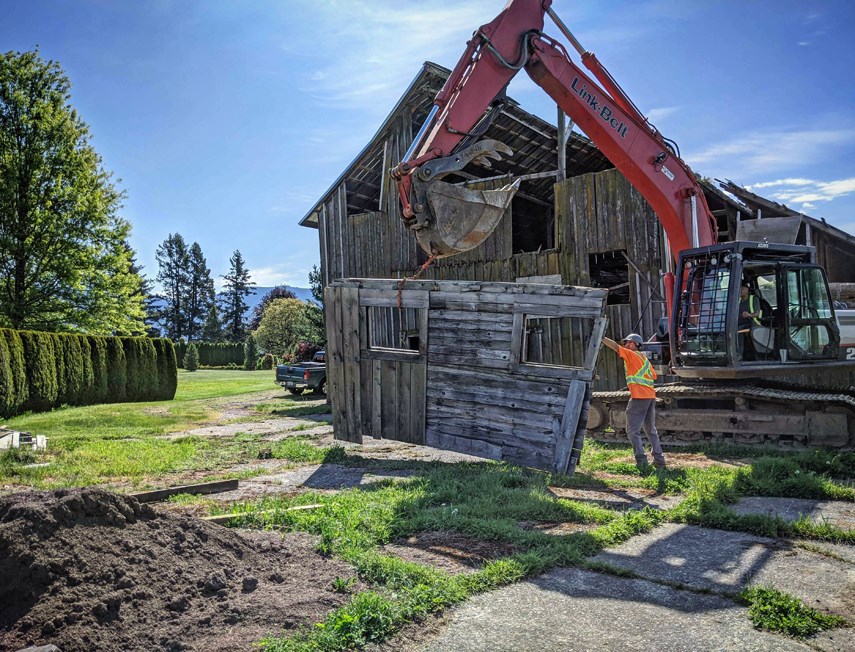 The North Vancouver founder of a company that is trying to upend the demolition industry by focusing on the deconstruction of buildings is feeling extra confident following a successful appearance on CBC’s Dragons’ Den last month.

Lynn Valley resident Adam Corneil was inspired to create his company several years ago while working in construction, during which time he became concerned with the volume of lumber that demolition crews were throwing away from old homes.

Corneil founded Unbuilders in 2018 with the intention of deconstructing, or “unbuilding,” houses piece by piece and salvaging the materials to be resold into the supply chain.

“I knew how much value was in the lumber behind the walls,” said Corneil. “It was all old-growth Douglas fir, most of it which would have been milled in the area back in the day – a lot of it would actually have come from the North Shore. For me it was just criminal to see this lumber be torn down and thrown in the landfill.”

Corneil made his appearance on Dragons’ Den’s Oct. 29 episode. He was seeking a $500,000 investment from the long-running entrepreneurial reality show and instead walked away with $600,000 commitment from all six investors and show hosts.

“I was not expecting a Dragons’ sweep,” said Corneil.

Describing himself as a green builder and renovator who’s passionate about protecting the environment, Corneil said his vision is for a construction industry that emphasizes deconstruction and remanufacturing as opposed to demolition and disposal.

He points out that Metro Vancouver is one of the demolition capitals of the world and, across Canada, demolition accounts for millions of tonnes of waste every year.

“It very well could be the biggest contributors to our landfills,” he said.

The City of Vancouver has a green demolition bylaw, which means there are minimum reuse and recycling requirements that apply to demolition waste from houses built before 1950.

When it comes to deconstruction – or, salvaging the valuable, historical wood that then can be used for other building projects or products – the bylaw is enforceable only when attempting to demolish a heritage listed house, or a house built before 1910.

No such bylaws exist on the North Shore, though that’s something that Corneil would like to see changed.

“We have a lot of history on the North Shore from our construction, our houses,” said Corneil. “We should be respecting these materials and we should be mandating that they’re captured and recirculated in the supply chain.”

When Unbuilders completes the deconstruction of an older home, the raw wood and material culled from the site is then sold to builders, woodshops, landscapers and DIY creators who can then turn it into anything from flooring and stair treads, to countertops and furniture, said Corneil.

There are several reasons why a builder might want to use old wood as opposed to new, according to Corneil.

For one thing, there’s the environmental component of it, which encourages the recycling of old wood so new trees don’t have to be felled. Also, putting old wood back into the supply chain as opposed to recycling it for fuel or landfilling it guarantees a superior product, said Corneil.

“Any wood products that we have today are from second- or third-growth forests. The advantage of old growth is it’s from bigger, older trees. It’s just a higher quality lumber,” he said.

And, according to Corneil, there’s also just the plain fact that old wood culled from an older home tends to look better than a newer product. It’s what he refers to as “Wood with a story.”

“We’re tracking where the wood came from and we’re starting to provide that to our customers. They can know what house that came out of,” said Corneil. “It’s got a beautiful esthetic on top of its story as well.”