Tom Bell remembers stowing away on the ferry across Burrard Inlet and getting caught.
Rosalind Duane Aug 11, 2015 10:22 AM
Previous Next
1 / 1
Expand
Previous Next

Tom Bell remembers stowing away on the ferry across Burrard Inlet and getting caught.

It wasn’t the first time he and a friend hid in the bathroom for a free ride to Vancouver and back to the North Shore, but this time they were found out and kicked off on the other side.

The pair had to walk home from the ferry dock in downtown Vancouver, over the Second Narrows bridge, and up to Lonsdale Avenue. It’s no surprise that his parents were quite worried by the time he returned home later that evening. He was seven years old at the time.

Bell recalls the memory with a laugh, noting his friend probably coerced him into it.

His family lived at Second Street and St. Georges Avenue until he was seven and then moved to 17th Street and Lonsdale Avenue. He remembers watching his first TV show in 1953 when neighbours got the first TV on the block and let local kids in to watch Superman. He also remembers playing kick the can.

“We had hours of fun as neighbourhood kids just playing that game and all we needed to enjoy ourselves for an afternoon was an empty can of beans.”

The SuperValu store was right across the street from his family home on 17th Street.

As a teenager, he worked part time at the store, and although he enjoyed junior high, he admits he wasn’t too interested in high school at the time.

“I couldn’t get out of school quick enough,” he says.

Bell helped organize the recent 50th reunion of North Vancouver High School alumni. The school, which was located on East 23rd Street where the provincial courthouse now stands, was the only secondary school in North Vancouver from 1924 to 1957, according to the book Time Travel in North Vancouver, A Peek into the Past by Sharon J. Proctor.

One of its most famous graduates is Lynn Ridgway, who later became Lynn Johnston, the creative mind behind the popular comic strip For Better or For Worse. According to a bio on the school’s reunion website, Johnston graduated in 1965. She was born in Ontario but raised in North Vancouver, and notes that her favourite class was biology with “Mr. Tobin.” She admits that she was “the one who released fruit flies into the main hall.”

Neighbourhoods in Central Lonsdale were mostly single-family homes at that time, and the area wasn’t the commercial hub it is now. 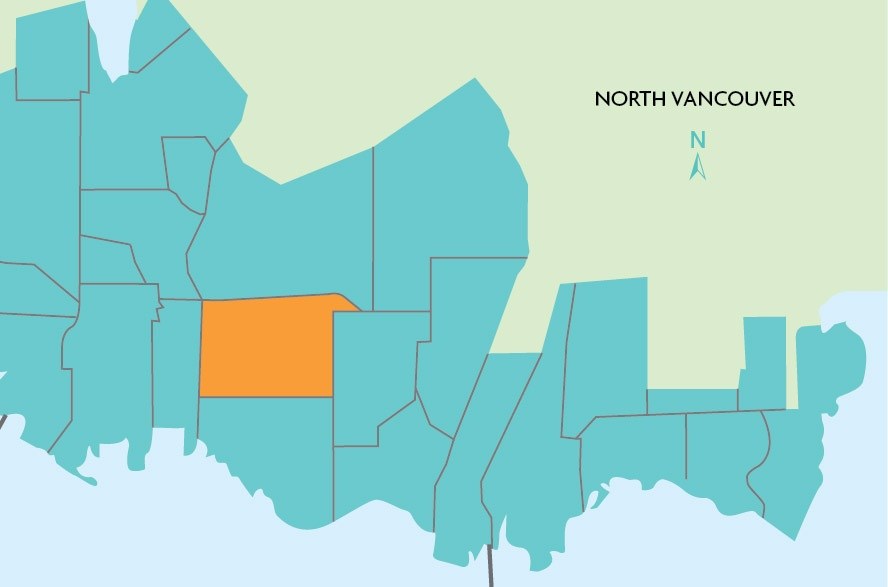 Certainly there were stores, and even an 80-seat theatre, which was located at 1545 Lonsdale Ave. It opened in 1911 and featured both movies and stage performances. It closed after 40 years in business, and the building was demolished in the 1990s. A new building now stands in its place.

“It has really, really changed and I think maybe not for the better,” says Bell of the Central Lonsdale area. “I don’t really like the way North Van has changed over the years because it’s just getting too crowded and too busy.”

He says he never wants to leave, though. “I love North Vancouver. It has been a great place,” he notes.

The neighbourhood of Central Lonsdale is nestled between Upper and Lower Lonsdale, weaving and bobbing a bit around nearby sub-neighbourhoods.

Its loose boundaries include Ridgeway Avenue to the east and St. Andrews Avenue after 17th Street to the Upper Levels Highway. It reaches down to East Keith Road, up to Eighth Street, around Victoria Park and down to Keith Road again after Chesterfield Avenue. It stretches over to Jones Avenue in the west until 15th Street. From 16th Street to the Upper Levels Highway, the western border is Mahon Avenue for a few streets and then Chesterfield Avenue after 19th Street.

The area was formed as the city expanded from its early beginnings on the waterfront up Lonsdale Avenue right to the edge of the mountains. Originally the territory of the Coast Salish people, the Mission reserve of the Squamish Nation is located two blocks west of the foot of Lonsdale Avenue, just below Central Lonsdale’s southern boundary at Keith Road.

Transportation was important to the development of the area, including a ferry wharf, and later a streetcar system established by 1906. Streetcars were replaced by buses in the late 1940s.

It is stated in the book North Vancouver’s Lonsdale Neighbourhood by Shervin Shahriari that the intersecting roads of Lonsdale Avenue, running from the water to the mountains, and Keith Road, running almost parallel to the waterfront, were a matrix around which most of the North Shore’s early development coalesced.

The Civic Centre revitalization project began in March 2009 and was completed in May 2012. Construction took two years.

According to the city’s website, an 80-year-old elm tree sat in the space between the existing library and city hall and its roots were causing structural damage to the two buildings.

It was determined that the tree had to be removed. To honour the elm and mark its presence where an atrium now stands, the re-purposed wood is the key feature in the wall of the atrium staircase. The wall is intended to echo the timber stacked in mill yards in the city’s early days.

A number of design initiatives address energy efficiency and material sustainability in the renovation.

The city’s website notes: “The building celebrates the community through art, design and shared informal community space inside and out.”

It is not unusual to see a variety of people sitting in the plaza reading or eating lunch on a warm summer day. Sometimes they stop to chat, watch the water feature (currently empty due to water restrictions), or play the free public piano that is on display.