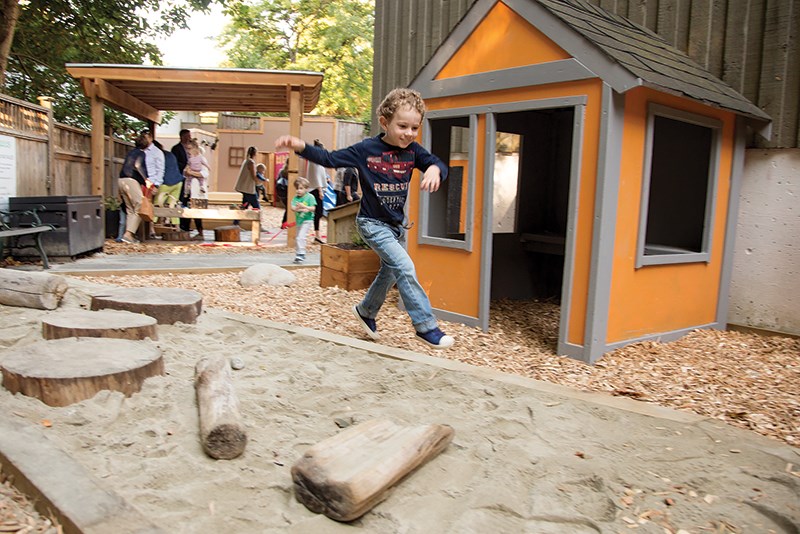 Some happy preschoolers are busy in the kitchen dishing up mud pies by the dozen.

They’re working quickly, gathering material around themselves to make the dishes, perhaps delivering the faux food to one of the small wooden houses that litter the play area where their friends and peers are waiting with glee.

It’s smiles all around.

The kids are at “work,” but really they’re engaged in the ancient art of play.

On the surface, it might look like any preschooler’s inevitable foray into roleplaying House or Kitchen, a zone where essential socialization skills are developed and new friends and memories are hard-won over moments shared.

But then you realize the action’s taking place outside, in a natural, curated environment that only adds to the youths’ sense of wonder, exploration and overall learning outcomes.

It’s not the average, nondescript playground you likely grew up on.

That, at least, is the message Edgemont Village’s Highlands Preschool is excited to share since its new natural playground and learning space opened last month.

“In early childhood right now there’s a very big trend around having a lot more natural material in the environment,” says Highlands executive director Christine Hamel. “Children aren’t getting out into forests as much to go and explore, don’t have access to natural material as much as what they used to when, let’s say, we were growing up.”

The solution, Hamel says, is to bring playtime outside and bring the outdoors into the classroom.

For the past year, Highlands’ board of directors, teachers, and families have been busy planning and fundraising for the project, which held its official ribbon cutting for the new space Sept. 14.

“There really wasn’t a lot of natural environment for the children to engage in,” she says.

Now, appropriately aged Highlands preschoolers can enjoy the new natural playground, which features a mulch playground, balance beam log, sand riverbed, small wooden houses, a raised outdoor kitchen area – where youth can gather material from the environment and pretend to cook – and a number of boulders and planter boxes, among other additions.

“Once the children get outside we notice that they’re a lot more engaged in nature. It gives them the ability to explore, to be creative, to ask questions,” she says.

Perhaps most crucial from an education standpoint is the preschool’s new outdoor pergola, an undercover staging area in the new playground.

While the new playground has been a major addition to Highlands, which has 10 preschool classes and services about 150 families on the North Shore, the sudden outdoor focus hasn’t actually come about all that suddenly, Hamel says.

Two years ago the preschool incorporated the nearby Murdo Frazer Park  into its programming in order to make outdoor schooling one of its focuses. Every Tuesday, Hamel explains, a group of children walk down to the park with teachers and explore the forest together.

The preschool’s new playground is their chance to emulate that experience in-house.

“We have adapted that,” she says. “We wanted to bring that learning the children get from spending two and a half hours out in a forest. We really wanted to try and mimic that out in our playground space as best we could.”