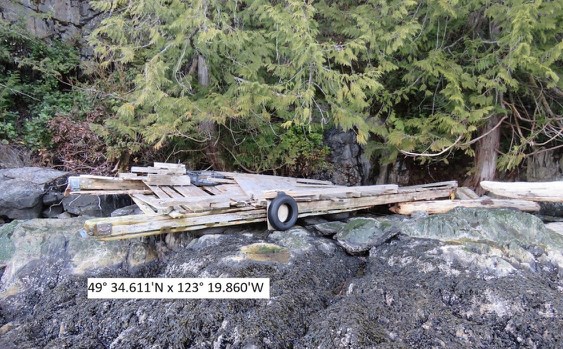 Part of a dock — just one item along the shore in an an inventory by John Buchanan of debris in Howe Sound.John Buchanan

Concerned citizens are coming together to clean up Howe Sound.

On Friday, March 15, representatives from various groups will gather in Lions Bay to plan a wide-scale clean-up, which organizers hope will be an annual event.

Stakeholders collaborating on the initiative include The Future of Howe Sound, the Squamish Nation, the Suzuki Foundation, My Sea to Sky, the Marine Ecosystem Reference Guide, and other local conservationists.

"The plan will be to collect debris caught in the hard to reach areas along the foreshore. Boaters have been surveying the sound over the last month since the winter storms and an inventory of debris that includes boat parts, docks, and a large block of polystyrene have been identified," Ruth Simons of The Future of Howe Sound Society, who is spearheading the initiative, told The Chief.

Windstorms on Dec. 20 and Feb. 9 battered the fjord, littering debris in Squamish at Darrell Bay, along the Sunshine Coast, at Lions Bay, and in West Vancouver.

" A co-ordinated approach to removal of the debris is being planned with sponsors and volunteers stepping up to assist," Simmons said.

Go to futureofhowesound.org/campaigns/winter-storm-clean-up/ for more information.