After nearly five months of construction and a couple years of planning, Storylab is almost ready.
Feb 13, 2020 3:42 PM By: Jeremy Shepherd 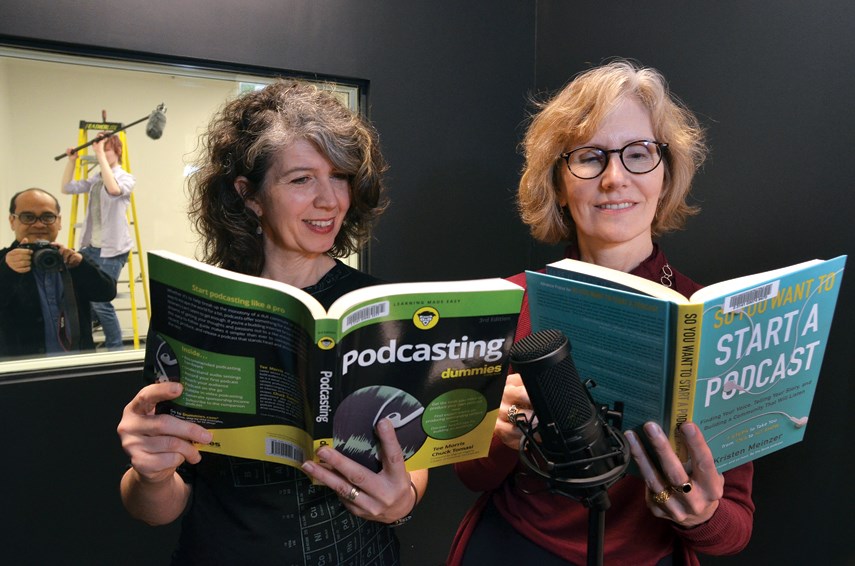 After nearly five months of construction and a couple years of planning, Storylab is almost ready.

As soundproofing work wraps up in the former server room on the second floor of the Lynn Valley library, staff are cataloguing video cameras, LED lights and microphones to go along with reams of new software, mixers, monitors, and DSLR cameras.

“Not things that the library normally acquires,” laughs the library’s innovation and learning manager Maryann Kempthorne.

The idea is to bring the library into a new age and to bring new readers, podcasters, videomakers and storytellers into the new space.

At an estimated cost of $305,000 Storylab is designed to be “a dedicated space for digital literacy, creativity, collaboration, and, of course, storytelling,” according to a recent press release from the library.

Roughly speaking, about 455,000 people will walk into the Lynn Valley library in a year. The new lab is for them, of course, but it’s also for the folks who never go into the library, Kempthorne explains.

Set to open this spring, the space is set to become a hub for video production and audio editing as well as digitizing slides and photographs.

“I would’ve liked to put a snooker table and a dartboard in there,” Kempthorne jokes. “Because people have less space at home we want to have a good usable space at the library.”

“It’s a reality for many people that life is becoming increasingly unaffordable,” she states in a release. “Few people have the resources — or physical spaces — to hone their crafts, to tell their stories. By providing barrier-free access to shared technologies and resources for digital creation, the library hopes to fulfil that need in our community, and act as a catalyst to inspire a community of creators.”

Plans also include a 23-seat room where library users can learn the basics of digital post-production and recording podcasts.

When the idea for the lab was first hatched in 2017, the library tried to gauge community interest. What was most needed, Kempthorne reports, was, “the opportunity to be heard and be creative.”

The library should be a platform for creating, she says, explaining that people should feel they can tell their stories with video with a digital book, with animation, or a combination of all of them.

However, there is a concern people are telling their own stories and not poaching from copyrighted work.

“One of our concerns is around people understanding what they do when they remix content,” Kempthorne notes.

Toward the end of February, Kempthorne says the library will mull how they can counsel library users about not infringing on other people’s intellectual property.

Ultimately, though, the Storylab is about changing the way people think of the library. The goal is to take people “who don’t necessarily recognize us as a place for them,” and have them feel comfortable and creative within their confines.

“North Vancouver District residents can not only read stories at our library, but they can learn to bring their own stories to life.”

Storylab was funded by the Friends of the Library organization, the library’s surplus and the District of North Vancouver.